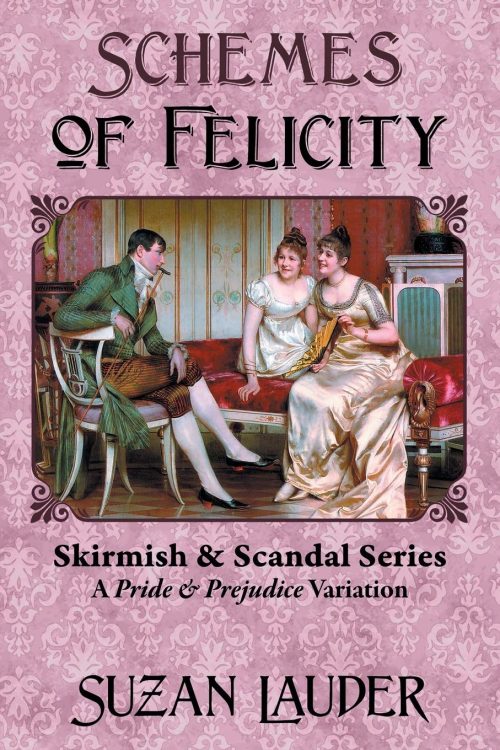 Suzan Lauder, an author whose Austenesque books I have appreciated in the past, offers a new variation inspired by Jane Austen’s Pride and Prejudice with an interesting twist. Schemes of Felicity begins like many variations of the novel after the stormy failed marriage proposal made by Fitzwilliam Darcy to Miss Elizabeth Bennet in the Hunsford rectory. What if this proposal is followed by not one, but two letters to Elizabeth and the second altering the original events completely?

Dejected and brooding, Fitzwilliam Darcy simply wants to be left in quiet to lick his wounds on the way back to London from Kent, but his friendly cousin is curious about their sudden departure and the vivacious guest at Hunsford. By the time the journey concludes, both cousins are ready to be done with one another and Colonel Fitzwilliam shares with his mother that Darcy was abominable on the journey and wouldn’t explain what had him in such a state. The countess does her own investigation and concludes that it is high time her nephew was married and calls a family council for an intervention that Darcy only agrees to if they will stop pestering him. Yes, he will agree to one month of attending balls and events of the London Season and put himself out there socially to promising young ladies.

Meanwhile, Elizabeth Bennet is chagrined after reading his explanatory letter and has a change of heart about the man at whom she threw such undeserved vitriol when he proposed with words that were too honest about her situation and family even when stunning her with his professed love. She had him wrong and thinks better of him though he was still responsible for separating her sister Jane from Mr. Bingley. A letter from her father that sends her to join Jane in London and be chaperoned by their aunt and uncle for a season among eligible men while he takes his wife and her younger sisters to task over their impropriety lands her right in Fitzwilliam Darcy’s world. There she encounters a Darcy who defies her past prejudices and gives them a second chance.

Schemes of Felicity launches the Skirmish & Scandal Series, a delicious new collection of standalone novellas from Meryton Press featuring a variety of popular Austenesque writers perfect for readers who want to delve into the Austen world and need an engaging, quick read to accommodate their busy lifestyle. It is a low angst, sometimes amusing, and often heartwarming piece that was what I might call a light comfort, or a feel-good read.

The Fitzwilliam family of schemers were somewhat over the top, but they are meant to be and hilarious as a result. Darcy grows in understanding himself and makes integral changes before the reader’s eyes into a man worthy of a good woman, and Lizzy, in her own way follows a similar path as she must learn to set aside her wounded pride and the lies she chose to believe. The story moves along swiftly to a romantic culmination that left me swooning. The shorter length and swift romantic development will not suit all readers, at least not all moods, but it is delightful for those who are open to such a reading experience.

We received a review copy of the book from the publisher in exchange for an honest review. Austenprose is an Amazon affiliate. Cover image courtesy of Meryton Press © 2020; text Sophia Rose © 2020, austenprose.com.

15 thoughts on “Schemes of Felicity: A Pride and Prejudice Variation (Skirmish & Scandal Series Book 1), by Suzan Lauder — A Review”