Happy Friday, dear readers. All Hallows Eve is this weekend. Have you chosen a costume and stocked up on candy yet? I don’t have trick or treaters visiting me in the country, however, that has never stopped me from celebrating the holiday by decorating with pumpkins and eating candy corn!

If you are seeking recommendations for great Jane Austen-inspired reading to put you in the mood for the spooky season, look no further. Here is a short list of six novels and one adaptation to help you become as addicted to Gothic fiction as heroine Catherine Morland in Austen’s Northanger Abbey.  Remember, it’s never too late to seek adventure abroad!

END_OF_DOCUMENT_TOKEN_TO_BE_REPLACED

As All Hallows Eve approaches on October 31st, tis the season to discover new and recent Gothic fiction in the historical suspense, romance, and mystery genres.

We can thank English writer, art historian, and politician Horace Walpole (1717-1797) for creating the Gothic fiction genre. After having a terrifying nightmare, Walpole was inspired to write The Castle of Otranto. Published in 1764, it combines many of the elements we see in Gothic novels today: an atmospheric isolated estate, a puzzling family mystery, and a heroine in peril from evil forces. Other classic authors of the genre include Ann Radcliffe, Matthew Lewis, Mary Shelley, Bram Stoker, the Bronte sisters, and Daphne du Maurier. END_OF_DOCUMENT_TOKEN_TO_BE_REPLACED

Have you ever read a book and felt an immediate infinity to the author—like they were your best friend and had written the book just for you? It doesn’t happen very often for me, but it did when I read Pride and Prejudice for the first time many years ago. I had to discover who Jane Austen was and what she was like. When I learned that Martha Lloyd was her best friend, I was immediately jealous. Who was this Martha, and why did my Jane consider her, “…the friend & Sister under every circumstance.”?

Two new books will illuminate  a lot. Martha Lloyd’s Household Book, is a copy of the actual book compiled and written by Martha that she used in the Austen household when she lived with them, and Jane Austen’s Best Friend: The Life and Influence of Martha Lloyd, by Zöe Wheddon reveals what it was like to be Austen’s friend and why Martha was a truly a remarkable person worthy of Jane’s friendship. END_OF_DOCUMENT_TOKEN_TO_BE_REPLACED

Let me ask you a serious question, Janeites. How many copies of Pride and Prejudice do you own? Fess up. Five, ten, twenty—or more than you will publicly admit to?

I fear that I fall into the latter category, having collected new and vintage copies of the classic novel since my teens when my mom gave me my first copy from her library. Since then it has been an uphill battle against my willpower. When a new shiny P&P hits the market, it’s mine.

Imagine my delight then when I spied a new P&P that included nineteen handwritten letters tipped in. WHOA! Pride and Prejudice: The Complete Novel, with Nineteen Letters from the Characters’ Correspondence, by Jane Austen & Barbara Heller contains the full unabridged text and recreated letters that Jane Austen’s characters wrote to each other during the course of the novel designed to look like they just arrived by post in 1813! I kid you not. Physical letters to hold in my hot little hands. END_OF_DOCUMENT_TOKEN_TO_BE_REPLACED 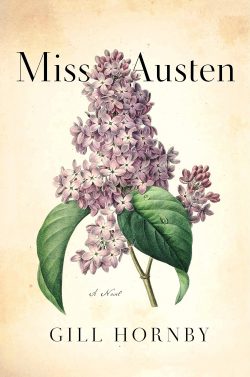 Austenesque fiction has produced numerous works told by supporting characters from Austen’s novels, using these fresh viewpoints to breathe life into familiar and beloved stories. Similarly, the title character of Gill Hornby’s Miss Austen is not the famous author, Jane, but her devoted elder sister, Cassandra. In many Austen biographies and surviving family letters, Cassandra figures as an exemplary daughter, sister, aunt, and friend, her quiet fortitude and domestic competence contrasted with her younger sister’s more volatile temperament and creative talent. But what happens when an author shifts the spotlight from Jane to Cassandra? How would a fictionalized retelling of her view of Austen family life engage readers?

Jane Austen once wrote to her niece Anna, “Three or four families in a country village is the very thing to work on” and Ms. Hornby has taken Jane’s advice for Miss Austen. In a narrative that alternates masterfully END_OF_DOCUMENT_TOKEN_TO_BE_REPLACED

A year and a half ago I had the privilege of reading an early manuscript of The Jane Austen Society by debut novelist Natalie Jenner. It only took two chapters for me to be totally hooked. By the end of the book, I was weeping with joy. I just knew that my fellow historical fiction and Jane Austen fans would rejoice as I had in the endearing characters, compelling plot, and the heartfelt tribute to one of literature’s most beloved authors, Jane Austen.

If ever we needed an emotionally uplifting escape, it is during these turbulent times. The Jane Austen Society is a joyous antidote to help us through a pandemic.

Today, I am so thrilled to finally share this very special book with my readers. Natalie has kindly offered an exclusive excerpt that will give you an introduction to one of the five main characters, Adam Berwick, as he reads Pride and Prejudice. END_OF_DOCUMENT_TOKEN_TO_BE_REPLACED 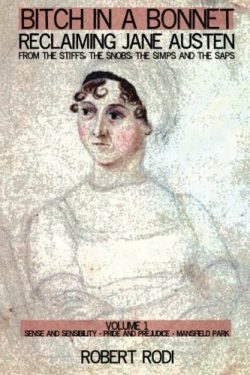 Compiling his thoughts on the first three of Jane Austen’s published novels, Sense and Sensibility, Pride and Prejudice, and Mansfield Park, author Robert Rodi fires a broadside at the swooning, sugary sentimentality of the modern Jane Austen fan craze.  He is appalled that such a group has turned a witty, sharp-tongued wonder into trite purple prose and slapped her silhouette on a t-shirt. Forging ahead for over four hundred pages, he dissects these Austen novels chapter by chapter, line upon line, precept upon precept highlighting a lack of romance and a decided prevalence of comedy and insight into the human condition.

I would like to give an early warning that this is not a book for those who have never read these novels. Though, it might be argued that it is exactly for those who are still considering them. My warning is for those who prefer to go into their books without spoilers and no undue influence because, reader, the author most definitely means to influence and discuss with thoroughness each character and each event and he does. END_OF_DOCUMENT_TOKEN_TO_BE_REPLACED 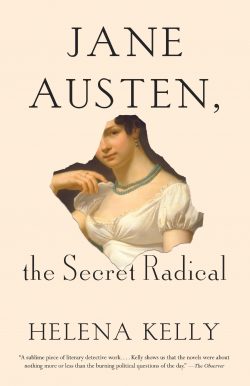 Was Jane Austen a radical? Was she sympathetic to the “radical reforms” of Charles James Fox and others that included universal male suffrage, the abolition of slavery, and women’s rights? Few would readily place her in the company of Thomas Paine, William Godwin, or Mary Wollstonecraft, but perhaps that is because she kept her dangerous views so well hidden that most of her contemporaries, as well as later generations, have missed them. While I began reading Jane Austen, The Secret Radical with an open but somewhat skeptical mind, I was curious to see what evidence Helena Kelly would provide. In Chapter 1, she throws down the gauntlet:

We’re perfectly willing to accept that writers like [William] Wordsworth were fully engaged with everything that was happening and to find the references in their work, even when they’re veiled or allusive. But we haven’t been willing to do it with Jane’s work. We know Jane; we know that however delicate her touch she’s essentially writing variations of the same plot, a plot that wouldn’t be out of place in any romantic comedy of the last two centuries.   END_OF_DOCUMENT_TOKEN_TO_BE_REPLACED

For those who are watching the eight-part series currently airing in the US on PBS, The World of Sanditon, by Sara Sheridan will be catnip to heighten your addiction. A copiously illustrated behind the scenes look at the making of the new television series, it also is filled with a biography of Jane Austen, historical information on the era, seaside life and health resorts, and Regency life for women.

In addition, there are spotlights on the characters and interviews with the actors who brought them to the screen. Here is a description of the book from the publisher Grand Central Publishing, details on the content, and images from the production for your enjoyment. END_OF_DOCUMENT_TOKEN_TO_BE_REPLACED