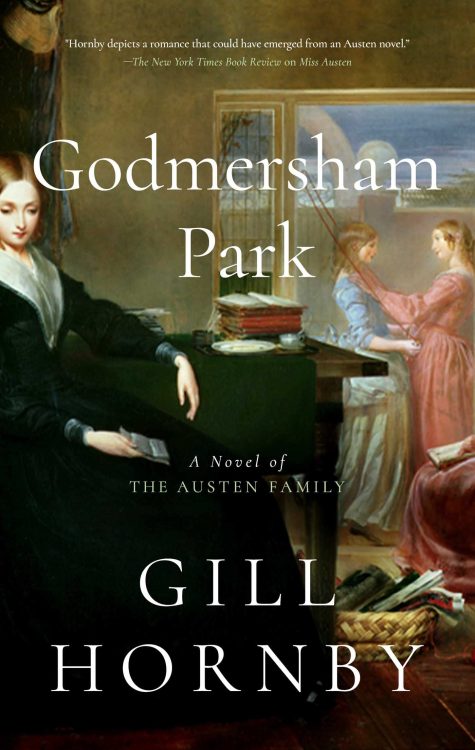 When tempting this Austen lover with a new book, one merely need mention that it is based on real life figures in Jane Austen’s life, and I am hooked. By making it a governess’ tale with a mysterious past, I am well-nigh bewitched. I settled in eager for Godmersham Park, anticipating Gill Hornby’s thoughtfully considered development of characters, setting, historical context, and engaging plot.

“At half past six, in the bleak, icy evening of 21 January in the year 1804, Anne Sharp arrived on the threshold of Godmersham Park.” (3)

Anne Sharp arrives in Kent as an unknown thirty-one-year-old woman whom the Edward Austen’s have hired sight unseen through the influence of a family acquaintance to fill the role of governess to their oldest daughter, Fanny. This is their first experience with a governess and her own first time in the role.

At first, Anne is somewhat lost. She was reared to be a gentle woman right up until her mother’s recent passing. That life is gone. Her own circumstances are now reduced, and she is conscious of the social status difference and need to satisfy the Austens.

“Her old life – those days once so large, rich and colourful – was behind her, for now. A small corner would be all she required, into which she could shrink and think and reflect. Where her intellect might hope to flourish, though her body and her time must henceforth be enslaved.” (7)

A Well-Educated Bluestocking vs. a Genteel Country Miss

The early days at Godmersham Park are filled with learning what is expected of her.  Anne’s idea of tutelage was far too studious for Fanny’s mother Elizabeth Austen, who wants her daughter not to become a bluestocking and very much wants her to be a gracious lady of the manor with husband, children, and estate like herself. The Austens are a large family and bustling with family activities that include Fanny. Anne is thoroughly disillusioned from her excitement to teach another. Like her mother, Fanny is uninterested in broadening her knowledge of the more studious subjects.

“In its moments of celebration, each family did reveal its true self. The Austens, she saw, were entirely contented unto themselves. There were no unsettling cross-currents of feeling, no signs of individual rancor or preference. They were all bound together by custom, tradition and an even, simple affection: united in their felicity.” (168)

The Mystery of the Governess’ Past

Anne Sharp’s history before she came to the Austen’s is steadily revealed in flashback memories as she goes about her regular tasks. She’s playing the role of ‘Proper Governess’ and always observing with wonder the large, unaffected Austen family compared to her own previous experience. Through her former maid, Aggie, who is still living in London, she is slowly seeing the mysteries of her past unveiled while she goes forward with her new life.

There is something Gothically tantalizing in the way Jameson, the lecherous man of affairs, has been fixated on Anne since she was a girl. The hints that her parents were unconventional, with a mother who was on the stage, and a father who was indulgent when around, but often absent, and is rarely seen in the last few years, even when her mother died leaving her in her present circumstances.

Anne’s life at Godmersham is as neither servant nor master so the loneliness of being between is felt. The treatment of the surly serving staff, barley edible food from the frosty cook, and the odd petty thefts of her few personal items are troubling. She is friends with her mistress Elizabeth Austen’s sister Harriet Bridges who blows hot and cold in her friendship choosing Anne when there is no one else about. Her greatest concern are her abominable sick headaches which she fears may make her lose her place and her source of income and security.

When there are visitors, she is ripe for what is to come when the household is enlivened by family guests. One such visitor is Edward Austen’s brother, the charming and flitting Henry, who is loved by all and seemingly hasn’t a care in the world that women like Harriet and the lonely Anne might fall more deeply than he imagined. But the deepest longing she feels comes from exposure to Fanny’s letters from Aunt Jane, Edward Austen’s younger sister, and then the arrival of the wry, witty woman herself shows Anne the true friendship and companion of the heart she has been missing all her life.  She is also brightened by the amateur theatricals she writes and directs, fishing by the river, volunteering at the village school, and rambles in the park talking writing with dear Jane.

Taking Stock After a Year

The book has slowly and gently built to two crisis points: Anne’s discovery of the truth about her father and her past as well as Anne facing facts about her feelings for charming Henry and Jane Austen.

“From this day forward, she would anoint her mind with full power over her weak, foolish heart. And, throwing the torn remnants of leaf over her shoulder, Anne marched back to the house.” (212)

She is determined, but will her own heart and vulnerability betray her in the end?

Godmersham Park’s style, pacing, and tone were no surprise after experiencing Hornby’s earlier novel, Miss Austen. I appreciated the concluding notes that explained where the author dove entirely into fiction and where she attempted to stay close to her source materials. I found the author’s interpretation of the Austen and Bridges family characters fascinating, even if I reserve the right to a different opinion in some cases. This book was loaded with interesting daily life scenes and characters studies. The restrictions placed on the plot to accurately reveal the life of a governess during the Regency era would entail making it challenging to hold the reader’s attention all the time. However, mixed with the toils are little sparks of hope and triumph that historical fiction fans who like an authentic backdrop and a character driven, gently paced plot will appreciate.

We received a review copy of the book from the publisher in exchange for an honest review. Austenprose is an Amazon affiliate. Cover image courtesy of Pegasus Books © 2022; text Sophia Rose © 2022, austenprose.com.

4 thoughts on “Godmersham Park: A Novel of the Austen Family, by Gill Hornby — A Review”