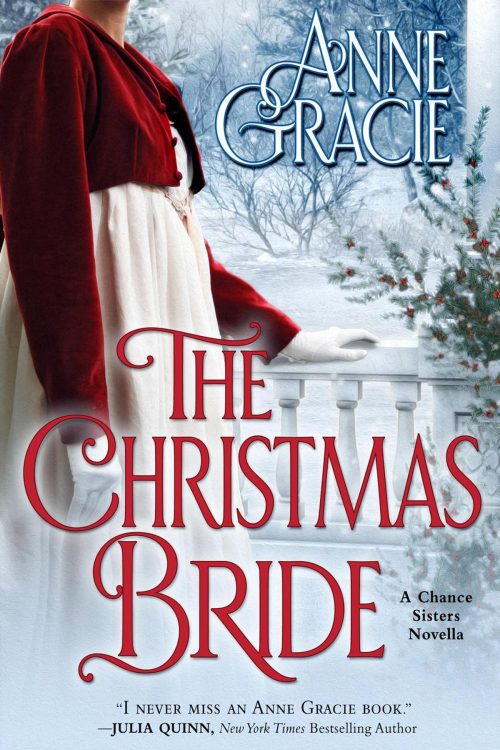 There’s nothing like a romantic Christmas novella. Every year I look forward to a new batch to brighten my holiday reading. The best ones warm the heart, and this year we especially need that. The many readers already familiar with Anne Gracie’s Chance Sisters novels will love The Christmas Bride.

The story begins with Blake Ashton, known as Ash, making his way back to England after ten years abroad. He’s been living in the Far East, where his daily life involves “…balmy breezes, azure skies, spicy foods, and warm, willing golden-skinned, sloe-eyed women.” After a meeting with his business partners over the holidays, he intends to return to his adopted home immediately, without seeing his family. We learn that as a young man, he made some disastrous moves that had placed his mother and sister on the brink of ruin, but it’s not until later in the book that the scope of his misdeeds is revealed.

On the last leg of his journey, Ash is held up by a footpad with a pistol. He draws his own, and when a boy runs out yelling, “No!” Ash discharges his weapon and injures the footpad, who turns out to be a young lady. Horrified, he carries her to the rundown cottage where she and her brother have been living, and he stays on to care for her since there’s nobody else to do so. The fact that she’s quite lovely isn’t lost on him, either.

Charlotte (Charley) Underwood and her little brother, Toby, have fallen on hard times. Ash finds out from Toby that their father shot himself due to gambling debts. Until Charley comes of age in about a year, their cousin Albert is their guardian. He wants Charley to marry his son, whom Toby describes as a “drooling simpleton.”

Ash’s friends and business partners soon show up. Worried that he hadn’t arrived on schedule, they set out to look for him and soon located the cottage. Max, Lord Davenham, insists on taking Charley and Toby to Davenham Hall for the Christmas holidays. Ash will be there, of course. Because Toby is so enthusiastic, Charley reluctantly agrees.

In the midst of all this, Ash comes up with the brilliant idea of proposing to Charlotte. “He could marry her, set her and Toby up…make provision for anything they needed, and send Cousin Albert and his son packing.” But Charley refuses him. Once she learns from the wives of Ash’s friends that he intends to return to his life in the Far East after the nuptials, she’s even more determined to say no. This isn’t the kind of marriage she wants. Ash has been so kind and loving with both her and Toby, she’s gone and fallen for him. But Ash hasn’t expressed similar feelings for her, and she wants no part of a marriage of convenience. Not until Ash reveals his past to Charley does he begin to open himself to love and the possibility of a future with her.

Once the story shifts to Davenham Hall, the spirit of Christmas takes hold and one can feel excitement and happiness in the air. For a novella, the cast of characters is large, but they all play an important role in bringing Ash and Charley together. We root for Charley because, despite all the odds against her, she managed to live on her own and care for her brother for several months. And Ash, shouldering more guilt than anyone should have to bear for ten long years, very much deserves a second chance.

In The Christmas Bride, Ash proposes to Charley within a day and a half of meeting her. Because his motive is to protect Charley and Toby, this hasty decision can be forgiven. Due to Charley’s being bedridden for at least half of the book, the romance itself seems a bit rushed. The kindness of strangers is almost too good to be true, as Ash’s friends provide an abundance of understanding, food, gifts, and frivolity to an outsider.

If you like your romances sweet, without too many bothersome obstacles to overcome, The Christmas Bride is a perfect choice. Lovely and heartwarming, it will provide a blissful escape for an afternoon curled up by a fire, a cup of hot chocolate at the ready.

We purchased a copy of the book for our own enjoyment. Austenprose is an Amazon affiliate. Cover image courtesy of Gracie Enterprises © 2020; text Pamela Mingle © 2020, austenprose.com.

7 thoughts on “The Christmas Bride: A Chance Sisters Novella, by Anne Gracie — A Review”