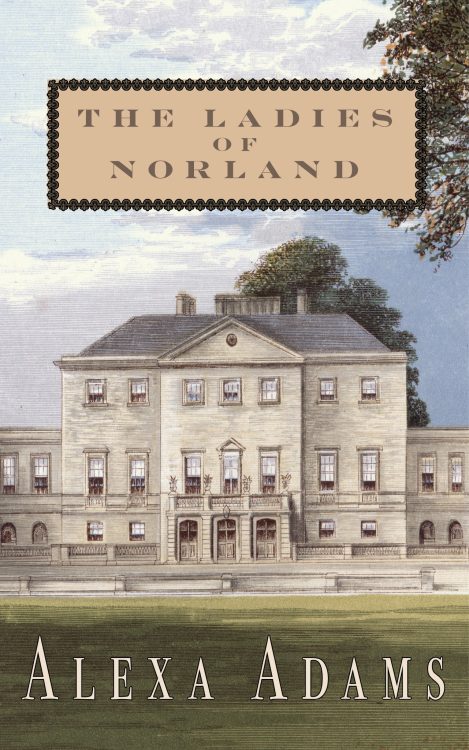 For several years beguiling authoress Alexa Adams has enjoyed warping our comfortable and familiar Jane Austen stories into quick, deliciously revolting variations that readers can experience with a tingling sort of shock at the new outcome. Her cold, conniving Jane Bennet, in Jane and Bingley: Something Slightly Unsettling (2013), to a pitiable Mrs. Norris in Becoming Mrs. Norris (2014), left me properly aghast as the hair on my arms stood on end. For her latest Twisted Austen effort, The Ladies of Norland, she revisits the Dashwood family in Sense and Sensibility to give us an alarming ‘what if’.

When the invalid owner of Norland Park dies and leaves his estate in the hands of his nephew, niece, and their girls, he goes a step further to protect the female dependents. This is followed by Mr. Dashwood when he too passes on. Instead of being left bereft of a father, home, and future income depended on the dubious honor of a selfish, grasping brother and sister-in-law, they are heiresses and the Misses Dashwood of Norland.

Naturally, Mrs. John Dashwood nee Ferrars is chagrined but has not lost hope to fill her family’s coffers. She is determined to see her oldest brother Edward attached to the oldest Miss Dashwood. All seems to be going her way as the Dashwood ladies, Elinor, Marianne, and their mother are happy to have Edward as a dear friend and possibly more. Felicities are on the tips of many tongues until…

Surely, you can guess, dear friends, that there must be a monstrous twist of fate or this could not be a Twisted Austen tale. I have enjoyed each of the tales from when they started out on the author’s blog in installments and eventually were published. I like the quirky pleasure of seeing some of the worst imaginings in story variations and appreciate the author’s deft hand in making them in the style that is strongly Austen-flavored in the process which gives it more possibility and suspense.

The Ladies of Norland mostly followed the oldest sister Elinor’s story, though Marianne has her share. I thought the part of the Ferrars family was both comical and a good source of conflict. I did wish that once Edward’s secret was out that there had been some more details just as I wish that there had been more details of the very end when Elinor and Marianne made their choices. The ending felt more like a wisp of smoke that dissipated and drifted away rather than solidly finished. But, that said, the author doesn’t leave the reader in doubt of the conclusion—a conclusion that I found eminently satisfying for dear Elinor.

All in all, this short story was a quick, quirky delight that I can recommend to those who enjoy exploring a more bizarre variation path for Austen’s characters.

We purchased a copy of this book for our own enjoyment. Austenprose is an Amazon affiliate. Cover image courtesy of Presumptuous Press © 2020; Sophia Rose © 2020, austenprose.com.

10 thoughts on “The Ladies of Norland: Twisted Austen (Book 6), by Alexa Adams — A Review”