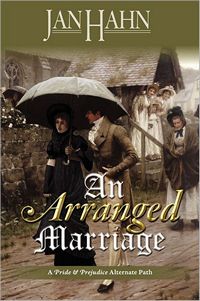 Debut author Jan Hahn’s novel, An Arranged Marriage, begs the question, “can a marriage of convenience ever lead to true love?”  In Hahn’s impressive alteration of Jane Austen’s Pride & Prejudice, days after Miss Elizabeth Bennet stringently refuses the proposal of Mr. Fitzwilliam Darcy at Hunsford, her beloved father dies, leaving the family with meager resources and an estate entailed to their toad-eating cousin, Mr. Collins. Half a year later, as the ladies of Longbourn are packing to make way for the new owner, Mr. Darcy offers for Elizabeth’s hand once again. Despite her passionate dislike and distrust of the man, Elizabeth, with a grievous and bitter heart, accepts his proposal, saving her family from ruination and despair.  Refreshingly narrated from Elizabeth’s keen and often caustic perspective, we are privy to her inner most thoughts as she struggles to conquer her turmoil of the loss of her father; the disgrace of her youngest sister; the humiliation of her eldest sister; the anxiety of nearly losing her home; and of course, the distress from this arranged marriage.  And yet most disconcerting to her psyche is her blossoming passion for the last man in the world she could ever be prevailed upon to marry.

Hahn’s mastery of Regency eloquence, as well as the seamless injections of Austen’s most famous prose, is pitch perfect. Most appreciated is her deft understanding of romance– sans all the tiresome throbbing and moaning one reads so often in many Darcy and Elizabeth adaptations.

“His voice was as low and resonant as the diva’s was high and clear, and I thought how lovely it would be to hear such words on his lips if we truly cared for each other. ‘Caro mi ben, credimi almen, senza di te languisce it cor.’ ‘My dear beloved, believe me at least, without you my heart languishes.’ With that last phrase, I turned and found him gazing directly into my eyes as he spoke.” (80.)

Without forced melodrama, Hahn spins an intriguing back-story, weaving Darcy’s sister Georgianna, Mrs. Darcy’s new lady’s maid, George Wickham and even Colonel Fitzwilliam through a snare of secrets and deception.  Like Austen, Hahn successfully balances drama and humour.  Even showing the stoic Mr. Darcy to behold a cutting wit in regards to his loose-lipped cousin, “Fitzwilliam? What is he now, an old woman?” (172)

As in Austen’s original, Elizabeth has not yet discovered that Darcy rescued Lydia from disaster, or comprehends that he could still be in-love with her after her headstrong refusal at Hunsford.  His blunders as a new husband and his propensity to hold private matters close, feed her doubts and suspicion.  I found myself holding my breath on more than one honest sparring – hoping and praying they would be able to “endeavor to practice the niceties of polite society.” (77)   But as they learned to get on, more often I found myself laughing out loud at Elizabeth’s musings.

“He smiled and kissed my hand before releasing it. We then retired for the night, each to our separate rooms, and I was even more aware than usual that we lay sleeping with only a wall and an unlocked heart between us.  Did I say heart?  I meant door.  Truly, I did.  Indeed, I meant door.” (94)

I first discovered the writings of “JanH” in February of 2007 on-line at Mrs. Darcy’s Story Site.  In fact, I read this very story in one sitting, into the wee hours of the morning, only to discover to my horror, for some unknown reason, my computer would not scroll past Chapter 12!  Fortunately, some kind soul at the site’s Forum sent me a link so that I could finish the story.  Ever since I have long wished that this talented author would publish her stories in print, so that this confirmed fan-girl could have them in my belonging.  Alas, this whimsical wish has come to fruition.

Congratulations, Jan Hahn! In a demesne of numerous Darcy and Elizabeth books available these days, An Arranged Marriage is at the top of my stacks, ready to be re-read.  Again, and again, wherever the book falls open.  It’s THAT enjoyable!  A must read.  I look forward to reading her next offering, The Journey due out in Fall 2011.

26 thoughts on “An Arranged Marriage, by Jan Hahn – A Review”