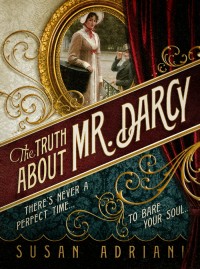 I’ve come to the realization that Pride and Prejudice “what if’s” are my favorite sub-genre to read in the world of Jane Austen fan fiction (JAFF).  They give us the opportunity to cut and mold the storyline of Austen’s work in a fresh new way, and to explore all the different avenues in the plot that are previously undiscovered.  It’s fascinating that by changing one line of dialogue or one person’s action, you get an entirely different story that gives the reader an opportunity to discover something new about their favorite characters.

Susan Adriani does just this in The Truth About Mr. Darcy (originally self-published as Affinity and Affection).  She poses the question, “what if upon first seeing the interaction between Elizabeth and Wickham, Darcy chooses right then and there to tell his history of his dealings with Wickham to Elizabeth?”  Instead of allowing Wickham the opportunity to spread viscous rumors about his character to the residents of Meryton, Darcy opens his heart up to the woman whose “fine eyes” have captured his heart.  Upon hearing of Darcy’s past with Wickham, Elizabeth realizes that her first impressions of people are totally off, as she thought Wickham was a true gentlemen and Darcy was a proud, pretentious man.  She offers an olive branch to Darcy, and tries to begin a friendship that winds up being very pleasing to both parties.  Wickham sees all of this, and realizes that Elizabeth means more to Darcy than she knows and tries to find some way to use this knowledge to his advantage.  Will his plan work?  Or will Darcy and Elizabeth realize how powerful and potent the feelings they have for each other truly are?

This book was awesome!  Having read tons of JAFF I always love it when I read a book that stands out, that chooses to differentiate itself from the hoard of fan fiction that’s out there.  Adriani has done this most specifically with her Lydia Bennet storyline.  Since Elizabeth knew who Wickham really was, she and Darcy were able to save Lydia from the fretful life she was plagued with in Austen’s original Pride and Prejudice.  I give Adriani a lot of credit for perusing the Lydia storyline as most other JAFF authors choose to leave her as the same, immature, hard wretch that she’s originally described as.  In The Truth About Mr. Darcy, we get to see what Lydia Bennet could have become had she had proper care, attention, and discipline.  And I have to admit, with a little TLC, I found myself liking her greatly.

I must warn readers that there are many mature scenes in this book!  They are, however, done in a tasteful, sensual way that advances the plot in a way that does not deter from the overall feel of the novel.  The intimacy that we see between Elizabeth and Darcy progresses their relationship and forms a strong bond between them.  As readers, we see what a truly remarkable man Darcy is, and how deep his love for Elizabeth is.  My only disappointment in the novel was with Darcy’s sister Georgiana’s very rushed ending.  I can only hope that the author expands her storyline in another novel.

Adriani is a fantastic storyteller and I look forward to reading her future endeavors as they are published.  Truly remarkable, creative, and brilliantly written, The Trouble With Mr. Darcy is one “what if” variation you will surely not want to miss.

10 thoughts on “The Truth About Mr. Darcy, by Susan Adriani – A Review”