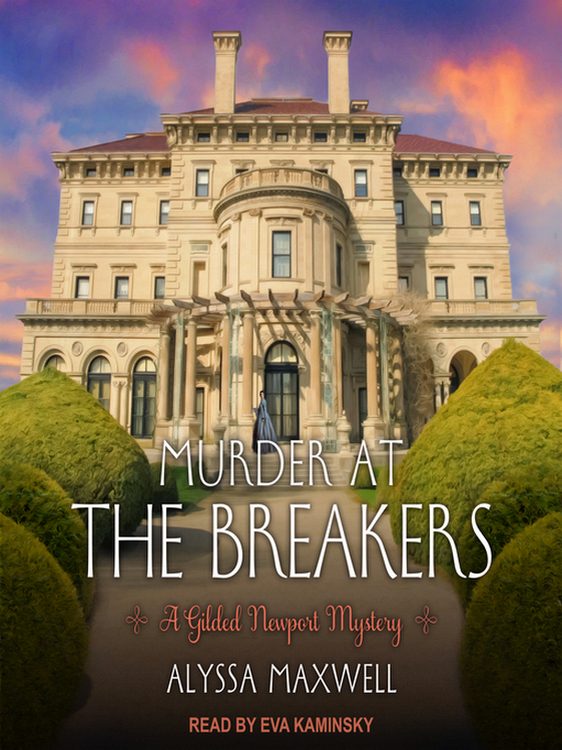 Like every other television historical drama lover, I noticed the promos for HBO’s The Gilded Age. So, when the Gilded Age Mystery series cropped up as a newer audiobook release, I relished the opportunity to dive into this lavish world set in Newport, Rhode Island where the Vanderbilts and Astors and the rest of the Four Hundred came to play.

Emma Cross, newspaper society columnist and cousin to the wealthy Cornelius Vanderbilt, has been
approached by her desperate ne’er do well older brother, Brady, to help him return some papers he stole from Cornelius’ safe. Next thing Emma knows, a man’s body falls from the balcony of Cornelius’ bedroom where Brady is found passed out next to a bottle of bourbon and a candlestick. Forget his theft, now her brother is up for murder and only Emma seems to believe that, for all of Brady’s trouble, he’s no murderer. Who would want to kill Cornelius’ secretary, and why? Is it to do with the new railroad deal going through, or something personal in the family? Emma must use her inside track giving her entre to the Breakers and the dazzlingly wealthy 400 Hundred families in Newport for the Summer social season as well as the working class locals to get at the truth before Brady gets put on trial for his life and a murderer ends her investigation for good.

Not Your Average Stylish Young Lady

Emmeline Cross is the central figure and sole narrator. She describes herself in contrast to her brother and pretty much every other Four Hundred member of her generation in the book.

“Even at twenty-one I was the steadier of the two of us, the more practical, the one who remembers that food and clothing and a roof over one’s head couldn’t be won at poker or dicing.” (9)

Refusing well-meaning family help, Emma works for one of the local papers and stubbornly lives alone in the house she inherited from an eccentric old aunt and drives around her own small equipage. This stubborn independence is a good thing and I respected that in a time when gentlewomen weren’t generally so. However, as she investigates the mystery, she brushes off good advice and won’t take help. I wanted to thump her a few times when I saw her pulling a stupid and ending up in dangerous moments because she rushed off alone and often leaped to conclusions without much evidence to support her theories.

The reader is introduced to a by-gone world of Newport, the summer playground for the rich, in a time of horse drawn carriages, gas lighting, and genteel manners. There is a blend of real-life figures with fiction, a solid mystery plot, and well-paced development of characters. The Gilded Age backdrop was there and was strongly present without taking over from the mystery-side of the story.

The mystery is only a portion of the story, though. There is good character development in Emma with room for more growth. The relationships she had with family, servants, friends, and others were engaging and drew me in, particularly Emma’s mysterious Mr. Anderson who both attracts and sparks her ire in equal measure.

Eva Kaminsky is a familiar narrator who matched up well with this genre and the tone of the writing.  She voiced the large cast and the variety of cast members well.

Summing it up, the author captured a time and place with vast appeal, bricky characters, and mysteries small and great that deliciously tease and torture the reader in turn. There is no stopping with just this one. Historical mystery lovers will find Murder at the Breakers a wizard good time.

We received a review copy of the audiobook from the publisher in exchange for an honest review. Austenprose is an Amazon affiliate. Cover image courtesy of Tantor Audio © 2021; text Sophia Rose © 2022, austenprose.com.

Have you read any of the Gilded Newport mysteries by Alyssa Maxwell?

If you enjoy historical mysteries with clever plots and atmospheric settings, Austenprose highly recommends them.

5 thoughts on “Murder at the Breakers: A Gilded Newport Mystery (Book 1), by Alyssa Maxwell, Narrated by Eva Kaminsky — A Review”