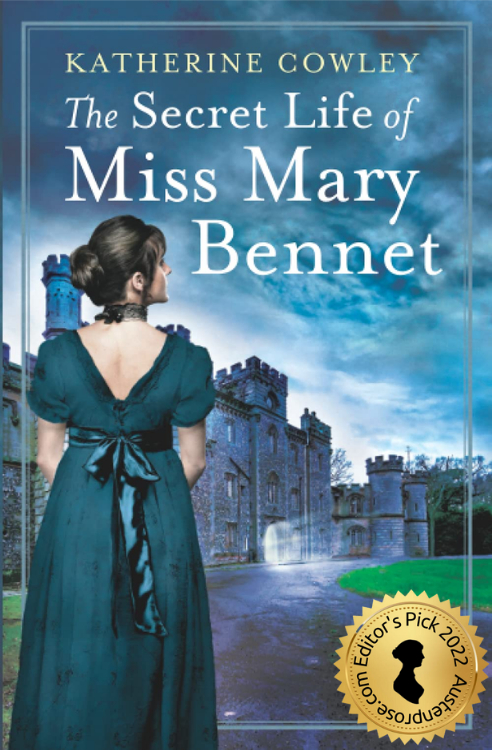 A journey from unattractive and least wanted sister to unlikely heroine is the basis for many a classic suspenseful adventure. Relatable and easily cheered on, Pride & Prejudice’s Mary Bennet gets her time to shine in Katherine Cowley’s first in a series of historical mysteries launching as a sequel to Jane Austen’s classic.

“Miss Bennet could do nothing to stop her life from shattering to pieces, so she played the pianoforte.” (1)

Condolences Come with an Offer

After the death of Mr. Bennet of Longbourn, his surviving widow and unmarried daughters are at a loss.
They in upheaval at how their cousin, Mr. Collins, rapidly comes to take his inheritance. The turmoil caused should be enough to distract her, but Mary is an observant person, so she is the only one to note the odd behavior of one of the movers and later catches the same man at more mysterious behavior involving her dead father’s belongings.

Imagine her surprise to discover the man is more than he seems, and she had passed a test of sorts devised by a fore to unknown relation of her father’s. Lady Trafford chooses Mary to return to her estate, Castle Durrington, where she wishes to train Mary. Mary is certain that training, particularly to fulfill the post of governess, is not something she wants and is evidence of, yet again, another person not seeing her as good enough for something better.

On the Trail of a Spy

Mary arrives at the castle and discovers that there is an air of mystery about the place and the people. Lady Trafford’s nephew, Mr. Withrow, both irritates her and attracts her with his fine looks and occasionally pleasing manners are interspersed with terse remarks. Her uneasiness drives her into pedantic speeches and stiff behavior which she knows is awkward and off putting, but she can’t seem to help it.

As she settles into the routines of the castle and gets to know the locals, she stumbles on a body and a mystery that launch her into secret detecting fervor. She is determined to solve the mystery and prove her worth.

Speaking to others and tracking down evidence leads her to suspect that this is bigger than the local constabulary thinks because espionage seems to be at the heart of the matter, and this is a time of war with the French. Someone close to Lady Trafford is consorting with the enemy. Mary will observe and take action. In the meantime, she has a social event to get ready for which is even scarier than a bevy of enemy spies.

Katherine Cowley carefully keeps true to Austen’s Mary Bennet and has researched the period well. The historical aspects are spot on as are the disposition of the characters. Mary is painfully awkward and has dismal failures even as she steadily learns and grows to come into her own. My heart went out to her as she brazened it out and kept trying. I was cheering for her as she worked to solve the mystery.

The writing style was to my taste and allowed for me to get ahead of Mary. I knew what was coming in the big reveal in the end after Mary works out the murder mystery which is all set up for what promises to be a rollicking good historical spy series.

All in all, this first in series did the job of introducing setting, characters, and series plotting while providing substantial character development and a riveting mystery to drive reader interest. Mary is an unlikely heroine. She is a fledgling in her detecting, but she gets there in the end and, furthermore, I was heartily rooting for someone to show the woman the respect she desperately needs.

We received a review copy of the book from the publisher in exchange for an honest review. Austenprose is an Amazon affiliate. Cover image courtesy of Tule Publishing Group © 2021; text Sophia Rose © 2022, austenprose.com.