What can the places that Jane Austen called home tell us about the author’s life and work? In Jane Austen at Home, historian, author, and BBC presenter Lucy Worsley looks at the author’s life through the lens of Austen’s homes.  As Worsley notes in the book’s introduction, “For Jane, home was a perennial problem. Where could she afford to live? Amid the many domestic duties of an unmarried daughter and aunt, how could she find the time to write? Where could she keep her manuscripts safe?” (1) Worsley seeks to place Jane Austen “into her social class and time” while admitting that, as an Austen reader and biographer, she has a vision of the beloved author that allows Jane to speak for her and to her circumstances. “Jane’s passage through life, so smooth on the surface, seems sharply marked by closed doors, routes she could not take, choices she could not make. Her great contribution was to push those doors open, a little bit, for us in later generations to slip through.” (4)

Jane Austen at Home is divided into four major sections, titled as acts in a play. I thought this a lovely touch by Ms. Worsley, reminding readers of the Austen family’s love of amateur theatricals. “Act One: A Sunny Morning at the Rectory” covers Austen’s early life at Steventon Rectory in Hampshire (1775-1801). During this period, Jane traveled to relatives’ homes and even lived away at boarding schools for several years. Nonetheless, Steventon remained her place of safety until her father’s retirement forced Mr. and Mrs. Austen, along with Cassandra and Jane, to move to Bath.

Life in Bath and later Southampton (1801-1809) is detailed in “Act Two: A Sojourner in a Strange Land.” During this time, Jane’s father died, leaving the Austen women dependent on Jane’s brothers for financial support. One highlight of these chapters is the explanation of the Stoneleigh inheritance as it related to Jane’s family. While I have struggled to understand these events in previous Austen biographies, Worsley does an excellent job of unraveling the conflicting claims to an estate belonging to a branch of Mrs. Austen’s family, the Leighs. The possibility of a substantial legacy from the estate of the Honourable Mary Leigh dangled temptingly before Jane and her family for a number of years, but ultimately Jane’s wealthy relations, the Leigh-Perrots, won out, leaving Jane and her family to fend for themselves. 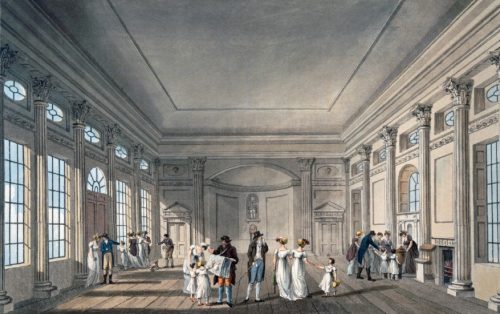 Jane would go with her rich and self-indulgent uncle to drink the waters at Bath’s Pump Room. He kept the whole Austen family on tenterhooks about what he’d do with his money.

At this juncture, Jane’s brother Edward offered Mrs. Austen and her daughters the use of a cottage on his estate in Hampshire. “Act Three: A Real Home” covers the period of Jane’s life at Chawton Cottage where Worsley describes the “established routine that allowed Jane to be extremely creative.” (250) During this time (1809-1817), Austen’s early novels were published, and she had time to devote to writing her later works, while Mrs. Austen and Cassandra handled most of the housekeeping duties.

At Godmersham Jane was made to feel like the poor relation. Her niece Marianne, shown here with two of her sisters, described how Jane would sit sewing quietly, then suddenly burst out laughing as she thought of a joke for one of her books. (Editor’s note. This passage made ME burst out laughing!)

Sadly, Jane’s “happily ever after” at Chawton Cottage lasted only a few years. “Act Four: The End, and After” details Austen’s illness and early death. Jane’s family moved her to Winchester, in search of skilled medical treatment for her mysterious illness. Sadly, no cure was found. Jane Austen died on July 18, 1817, and was buried a few days later at Winchester Cathedral. An epilogue, “What Happened to Jane Austen’s Homes?” provides a somber note to the close of the story. With Steventon demolished and several of the Bath townhouses bombed out or divided into flats, Worsley encourages Janeites to visit the homes that are still standing, especially Chawton Cottage, now Jane Austen House Museum, and Chawton House, a library dedicated to women’s literature. For readers wanting to delve deeper, there are manuscript and book sources listed, in addition to a bibliography, chapter notes, and index.

The cramped rented flat in the upper part of this house was the sisters’ home for the last weeks of Jane’s life, chosen because it was near the hospital in Winchester.

Throughout the biography, Worsley provides vivid details of the homes, furnishings, gardens, and neighborhoods where Jane Austen lived, bringing these places to life. We also see the influence that these homes exerted upon Jane and her work. Worsley takes us through the ups and downs of Jane’s life, the family celebrations and disasters, and most revealingly, the everyday aspects of life that she so realistically observed and captured in her novels. The only improvement to the virtual tour of Jane Austen at Home that I could wish for would be an actual tour with Lucy Worsley as a guide.

The cottage at Chawton looks charming in this image painted by Jane’s niece Anna, but its proximity to a pond and a busy road made it less than perfect as a home.

Backed by extensive source documents, letters, and full-color and black and white images, Jane Austen at Home shines with engaging storytelling and enthusiasm. It is both accessible and well-researched: an engaging Austen biography that I highly recommend to her fans—both newcomers and seasoned veterans of Austenland.

Bibliophile and Art History major, so not the most practical person you'll ever meet, but I love a good story. View all posts by Tracy H

5 thoughts on “Jane Austen at Home: A Biography, by Lucy Worsley — A Review”