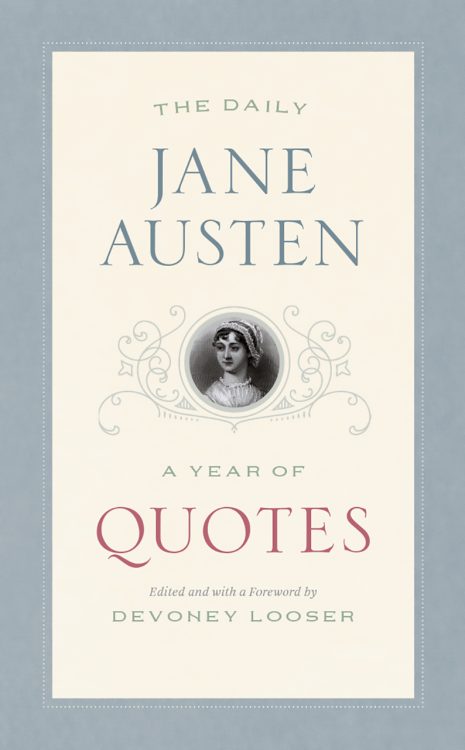 Hot off the presses is a new Jane Austen quote book.

I know what you are thinking. Why do I need yet another pithy volume of my favorite author’s best lines jockeying for position on my bedside table along with my Jane Austen bobblehead and my “Waiting for Mr. Darcy” candle?

Well, …it really helps that this new compilation of daily quotes has been edited by, and the foreword written by, Stone Cold Jane Austen, a.k.a. Devoney Looser, Foundation Professor of English at Arizona State University, a Guggenheim Fellow, and a National Endowment for the Humanities Public Scholar.Who could possibly be better qualified?

It is a Truth Universally Acknowledged

Each chapter opens with a memorable passage heading up the month followed by daily quotes from Austen’s six major novels, minor works, and her letters. In the foreword, Looser extolls upon the significance of Jane Austen’s famous opening line in Pride and Prejudice, so often quoted in the news media, popular culture, and by fellow writers, “It is a truth universally acknowledged…” If you are not familiar with Jane Austen’s most famous quote you must be from another planet and desperately need this book to communicate with humans! (brainwashing included)

Austen and her words have influenced movies, television, books, and world culture. She is indeed everywhere and a bonified pop culture icon. I am staring at a “My good opinion once lost, is lost forever.” tea mug sitting beside me. I can totally relate to Looser’s admission that her, “…acknowledged truth is that I treasure the “sensibly scented” cardboard Austen that hangs in my car, just as others embrace their dashboards Jesus, fuzzy dice, or mud-flap girls.”

Okay, enough with the Austen pop culture palooza. Here is the publisher’s stuff.

It is a truth universally acknowledged that Jane Austen is eminently, delightfully, and delectably quotable. This truth goes far beyond the first line of Pride and Prejudice, which has muscled out many other excellent sentences. So many gems of wit and wisdom from her novels deserve to be better known, from Northanger Abbey on its lovable, naive heroine—“if adventures will not befall a young lady in her own village, she must seek them abroad”—to Persuasion’s moving lines of love from its regret-filled hero: “You pierce my soul. I am half agony, half hope. Tell me not that I am too late.”

Devoney Looser, a.k.a. Stone Cold Jane Austen, has drawn 378 genuine, Austen-authored passages from across the canon, resulting in an anthology that is compulsively readable and repeatable. Whether you approach the collection on a one-a-day model or in a satisfying binge read, you will emerge wiser about Austen, if not about life. The Daily Jane Austen will amuse and inspire skeptical beginners, Janeite experts, and every reader in between by showcasing some of the greatest sentences ever crafted in the history of fiction.

Jane Austen (1775–1817) is regarded by many as one of the greatest writers in the English language. Though her work was not widely known during her lifetime, Austen is today a household name, and her six full-length novels are considered timeless literary classics. Devoney Looser is Foundation Professor of English at Arizona State University, a Guggenheim Fellow, and a National Endowment for the Humanities Public Scholar. She is the author of many books, including, most recently, The Making of Jane Austen, and the editor of the Penguin Classics Deluxe Edition of Sense and Sensibility. Her writing has appeared in the Atlantic, New York Times, Salon, Times Literary Supplement, and Entertainment Weekly.

Pocket-sized at 4.5 x 7.2 inches, slip this into your reticule and pop it out when you need an escape from the dental drill. I can think of nothing better to put me in my happy place.

We received a review copy of the book from the publisher in exchange for an honest review. Austenprose is an Amazon affiliate. Cover image and interior pages courtesy of University of Chicago Press © 2019; text Laurel Ann Nattress © 2019, austenprose.com.

4 thoughts on “A Preview of The Daily Jane Austen: A Year of Quotes, by Jane Austen & Devoney Looser”