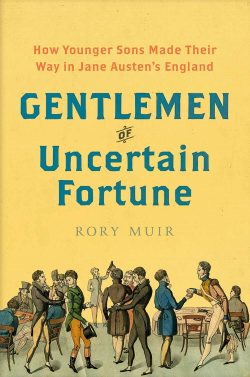 In Jane Austen’s novels, we discover the plight of younger sons who because of the English primogeniture laws, could not inherit their father’s estate and must find their own way in the world. Colonel Fitzwilliam in Pride and Prejudice and Henry Tilney in Northanger Abbey come immediately to mind. This father to first son inheritance tradition is the axis of the social structure of British society and is tightly bound to its restrictions. Historian Rory Muir explores this dilemma and the courses available to younger sons in his new history book, Gentlemen of Uncertain Fortune: How Younger Sons Made Their Way in Jane Austen’s England. Using Austen’s characters, her own family, and historical figures as examples, we are taken on a journey through the era to discover what options were available to younger sons of “good families” to find an acceptable profession and earn an independent living.

A portrait of Jane Austen’s England told through the career paths of younger sons—men of good family but small fortune.

In Regency England, the eldest son usually inherited almost everything while his younger brothers, left with little inheritance, had to make a crucial decision: what should they do to make an independent living? Rory Muir weaves together the stories of many obscure and well-known young men, shedding light on an overlooked aspect of Regency society. This is the first scholarly yet accessible exploration of the lifestyle and prospects of these younger sons.

Anyone who has read Pride and Prejudice knows that the Bennets had a problem. Their five children were all girls and the family estate of Longbourn was entailed on the male line, so that when Mr. Bennet died it would pass to a distant relative, the Rev. Collins. The girls would each inherit a mere pittance, a thousand pounds of capital, which, safely invested, would scarcely yield enough to enable them to live in even the reduced circumstances of Miss Bates in Emma. Nor could they have much hope of improving their circumstances by working, for the only acceptable work for a woman of their class was as a governess, a companion or a schoolteacher, occupations that were notoriously underpaid. The obvious injustice of this arrangement has alerted modern readers to the plight of young women in Regency Britain who, if they lacked independent means, could only hope to obtain comfort and security through the lottery of marriage.

But suppose that the Bennets had five sons, not five daughters: the estate would pass to the eldest son – the male counterpart of the gentle Jane. The other four boys would still have to make their way in the world, for they would inherit no more than if they had been girls. Their father, and after his death, their eldest brother, might give them some help in establishing themselves in a career, but they would be expected to become independent and make money to be able to support a wife and family, before they could contemplate marriage. What would they do for a living? What careers were open to the younger sons of good families in Britain in the later eighteenth and early nineteenth centuries? How could a gentleman work for his living without ceasing to be a gentleman?

There were limited choices facing a young man: he might go into the church, or practice medicine or the law; he might even go into banking or one of the other respectable branches of trade; he might join the navy or the army; he might go out to India or one of the other colonies, or he might secure a government position. Few other possibilities existed, and they were usually unattractive or limited to a handful of places. Indeed, each of these careers had its own characteristics that gave it an appeal to some, while making it unsuitable to others. The purpose of this book is to explore these possibilities, to consider the prospects of the young men who embarked on these careers, and to examine the ingredients that would contribute to their success or failure. In addition, I hope to convey: to view things from an individual as well as a collective perspective – how it felt, as well as how it worked. Preface (viii-ix)

This new book includes an insightful preface; chapters on younger sons and their families; money and society; professions that they might enter into such as the church, medicine, the law, the navy, and the army; India; appendices on inflation in the late eighteenth and nineteenth centuries, and statistics; notes; a bibliography; and an index. It also includes fourteen full-color illustrations.

Rory Muir is a visiting research fellow at the University of Adelaide and a renowned expert on British history. His books include Britain and the Defeat of Napoleon and his two-part biography of Wellington, which won the SAHR Templer Medal.

Late Georgian and Regency-era history and Jane Austen fans will enjoy Muir’s thorough research and accessible, entertaining style. I believe that this is one of the few books available on the subject of second sons during this era, and it will greatly serve fellow historians, novelists, and pleasure readers alike.

3 thoughts on “Preview of Gentlemen of Uncertain Fortune: How Younger Sons Made Their Way in Jane Austen’s England, by Rory Muir”