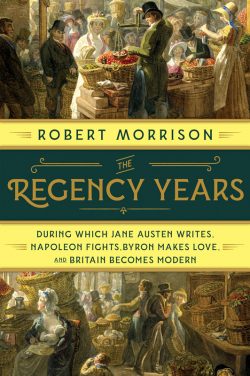 The subtitle for Robert Morrison’s history of Regency Great Britain, “during which Jane Austen writes, Napoleon fights, Byron makes love, and Britain becomes modern,” hints at the variety and diversity within its pages. In contrast to Jane Austen’s tightly focused fiction, famously self-described as “three or four families in a country village,” Morrison widens his lens to present extensive information and detail about Regency life that illuminates not only Austen’s world but our current time.

Morrison begins with a brief sketch of George Augustus Frederick, eldest son of George III and Queen Charlotte, in the book’s prologue. “The deep contradictions in the Regent’s character both energized and undermined him and were evident from an early age.” (3) With a string of mistresses, a secret and unlawful marriage to a Roman Catholic widow, an officially sanctioned marriage that was an abysmal failure, and the financial means to indulge every whim and fleeting inclination, the Regent was a constant feature of gossip and scandal during his lifetime. In 1812 he assumed the full authority of the crown, making him “not only the most powerful man in Britain but also the man at the head of the wealthiest, strongest, most ambitious, vibrant and productive country in the world.” (6) 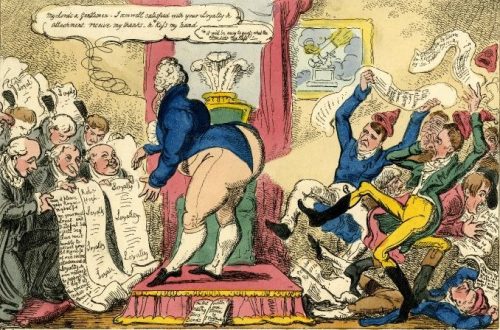 This print by George Cruikshank, was published on December 4, 1819, and is entitled “Loyal Address’s & Radical Petetions, or the R____ts most gracious answer to both sides of the question at once.” (48)

After setting the historical stage, The Regency Years dives into “Crime, Punishment, and the Pursuit of Freedom,” in Chapter One. In the wake of the French Revolution, Britain grappled with how to deal with the inequalities that “were evident everywhere, from the Highland Clearances in Scotland and the sectarian strife in Ireland, through the industrial unrest in Wales and the English Midlands, to the anger and despair that festered in the rookeries and prisons.” (63) Political satirists including caricaturist George Cruikshank, publisher William Hone, and poets Charles Lamb and Percy Shelley were at the forefront of the assault on the entrenched power of Church and State.

Chapter Two, “Theaters of Entertainment,” looks at the theaters, gambling halls, sporting events, holiday resorts, and art galleries where Regency audiences sought escape from “the wear and tear of their lives.” (123) And while at home, there was also the escape of reading, most notably the historical fiction of Walter Scott’s Waverly series, which succeeded in making the much-maligned genre respectable to both readers and critics. Scott “had shown the world that prose fiction…was the dignified equal of much older literary genres.” (117) Morrison’s analysis of Jane Austen was one of my favorites. He writes, “Better than anyone else either before or since, Austen wrote novels that combine romance with satire, and wish-fulfillment with social realism. There are enormous depths within her narrow domestic setting and rebellious passions within characters that are governed by polite restraint.” (109) This chapter also looks at the Regency obsession with Lord Byron, whose celebrity foreshadowed later cultural anti-heroes such as Marlon Brando, James Dean, and a gallery of self-destructive rock stars who took up Byron’s “mad, bad, and dangerous to know” banner.

Robert and George Cruikshank produced these two illustrations for Pierce Egan’s Life in London. In them, Tom and Jerry run the gamut of what the city has to offer pleasure seekers, from “Highest Life” to “Lowest Life” in London. (138)

The third chapter, “Sexual Pastimes, Pleasures, and Perversities,” continues to develop the book’s theme of conflicting forces in Regency society. Prostitution and the pervasive promiscuity throughout “aristocratic circles and down the social hierarchies” resulted in the rampant spread of sexually transmitted diseases. Pornography, referred to as “lewd” publications, was available under-the-counter from Regency book and print-sellers and sold in large numbers. Morrison examines Regency views about homosexuality, noting the disparity of attitudes toward male and female same-sex couples. Morrison closes by noting that “Though many of its attitudes, practices, and laws have long since been discarded, the Regency continues to exert a powerful influence on the modern understanding of human sexuality.” (181)

Chapter Four, “Expanding Empire and Waging War,” explores Britain’s role in international affairs, focusing on maritime strength and colonial expansion. During this period, Britain consolidated control of its vast empire. Morrison states that “goods from around the world flowed back to Britain, from ancient artifacts and modern chinoiserie, through sugar and rum, to tea and opium, for all of which Regency Britain had an unquenchable appetite.” (240)

John Constable exhibited this Scene on the River Stour, better known as The White Horse, in the spring of 1819, and after its critical and popular success led directly to his long-overdue election as an associate of the Royal Academy. (272)

The effects of industrialization on rural and urban life are documented in Chapter Five, “Changing Landscapes and Ominous Signs.” Steam locomotives, Regent’s Park and Regent Street, the reformer Robert Owen, the poet John Clare, artists John Constable and J.M.W. Turner, and Mary Shelley’s Frankenstein are just some of the subjects that Morrison explores. “More than any other work in English literature, Frankenstein is a prophecy about the modern world…As Victor’s creature resembles him, so we resemble Victor in our faith in science, our exploitation of the earth, and our failure to take care of one another.” (299) As scientific discoveries and inventions flooded the public consciousness, so did the uneasy feeling that their reckless use could destroy life rather than improve it.

In the epilogue “The Modern World” Morrison points out how the luminaries of the Regency influenced future generations with their lives and work. Moving from politics to architecture, from scientific discovery to fashion, and from social reform to literature, Morrison recaps the achievements of The Regency Years. “Now it is more evident than ever that its many legacies are still all around us.” (305)

This miniature of Mary Shelley was painted posthumously by Reginald Easton but probably bears some resemblance to her shortly after she published Frankenstein in 1818. Easton’s sources were her death mask and Edward Ellerker Williamson’s pencil sketch from 1821-22. (296)

Primary and secondary sources, chapter notes, illustration credits, and an index provide readers with detailed information on the Regency period. I especially appreciated the summaries at the close of each chapter that helped me better remember specific details and examples in context. My only wish for improvement would be including some color illustrations, especially the landscapes of Constable and Turner and the portraits accompanying biographies of Regency notables.

The Regency Years does an admirable job of bringing to life the tumult and variety of Great Britain during the early 19th-century. Learning about the world that Austen, Napoleon, and Byron inhabited is entertaining and informative while providing readers with insight into our own struggles, successes, and failures.

(Editor’s note: The digital images used in this post are copies of the original artwork, while the images in The Regency Years have been reproduced in black and white. We find it quite ironic that in a history book devoted to an entire era named after the Prince Regent, the author chose to omit his portrait. His Majesty’s likeness is only included as a caricature. We believe that Jane Austen would heartily approve.)