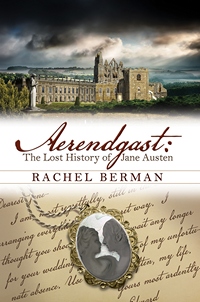 Jane Austen inspired novels now number in the thousands. While many of these stories are sequels, continuations and what-if’s of her popular novels, very few are based her life. This type of Austenesque novel is called a fictional biography—a skillful blending of known facts, family lore, and fiction into an original narrative. A few of my favorites in this sub-genre are Jane and the Twelve Days of Christmas,  the twelfth in the Being a Jane Austen Mystery series by Stephanie Barron, The Lost Memoirs of Jane Austen and Jane Austen’s First Love, by Syrie James and The Persuasion of Miss Jane Austen, by Shannon Winslow.

A new bio-fic inspired by Jane Austen’s life is in the queue this month from Meryton Press. Aerendgast: The Lost History of Jane Austen, by Rachel Berman is a literary mystery spanning contemporary and historical times with a bit of paranormal magic. The author has generously shared an excerpt with us today to give us a teaser. I hope you enjoy it. BOOK DESCRIPTION

Violet Desmond has just learned from her dying grandmother that the life she’s been living is a lie.

Left with only a locket, a newspaper clipping, and a name–Atherton–Violet sets off to discover her hidden personal history.  Simultaneously, the London academic begins to have vivid dreams in which a woman from the past narrates her life story involving the same locket, a secret marriage, and a child. A story intimately connected to Jane Austen.

Violet reluctantly agrees to receive help from cavalier treasure hunter, Peter Knighton. Blacklisted from his profession, Knighton can almost taste the money and accolades he’d receive for digging up something good on Austen; the locket alone is unique enough to be worth plenty to the right collector. It would be enough to get his foot back in the door.

The unlikely pair begin a quest for answers that leads them to Aerendgast Hallows. Knee-deep in hidden crypts, perilous pursuits, and centuries-old riddles, Violet must put her literary expertise to the test as she battles to uncover the secret that her loved ones died trying to reveal, before an unknown enemy silences her as well.

“I told you we should’ve taken the Jane Austen tour—the House and History tour was useless,” Peter whispered while passing through the garden at Stoneleigh Abbey.

“I told you I need to see it alone, without a crowd. It won’t work that way.”

“I don’t know, but something’s going to happen in the chapel. I can feel her pulling me there.”

“Okay, when the tour is over, we’ll figure something out.”

“I think the chapel door is at the other end of the garden. I say we make a break for it.”

“We can’t make a scene. They’ll know we’re in there and call security.”

“Come on, where’s your sense of adventure?” Violet pulled Peter back towards the chapel before he could respond. After detaching her hand from his sleeve, he followed as they moved closer to the chapel, trying to avoid being noticed. Truth be told, it wasn’t an altogether difficult task. The lone security guard was preoccupied with two-dozen school children playing in a fountain where they clearly didn’t belong. Thank God for school field trips. Violet approached the chapel door and stopped.

“What if there’s someone in there?” she asked.

Peter put his ear to the door and listened.

“It’s all clear,” he said with such seriousness that Violet had to laugh.

Violet pulled the heavy wooden door back and was instantly ambushed by the darkness in the chapel. It was an unusually bright day outside, and the transition left her momentarily blinded. Once her eyes adjusted, she could see bits of dust floating through the thick air, and she smiled. Jane was here. Violet was standing in a narrow room with wooden pews; the only light came courtesy of a few candles. Violet was impressed with the care that had been taken in restoring the room; everything was authentic. Her head began its familiar pounding and the usual feeling of dizziness overwhelmed her. She closed her eyes and breathed in the familiar musty scent. When she opened them again, she was not alone.

“It is rather a blessing, Jane, that you never married.”

Elizabeth Leigh, whom Violet recognized from a painting printed on the brochure in her hand, was now standing in the chapel with Jane Austen and her sister, Cassandra. Violet stood as still as she could, trying to understand what was happening. At first, she thought a group of actors were playing a scene, but upon closer look, she could see the figures before her were not of the earth—not flesh and blood. Yet, they weren’t ghosts either. They appeared to glow slightly and were completely opaque. She whispered “hello” to them, but her words went unnoticed. She sat down in one of the pews and watched.

“And why is that, cousin?” Cassandra asked as Jane remained silent.

“Because Jane will take care of you and your parents, of course. It is a sad thing when a woman is doomed to spinsterhood, but I say, make the best of it. Jane should rejoice that she has a home and an occupation, namely taking care of the family and house.”

“I am certain you are right, Mrs. Leigh, but Jane does not like to speak of such things.”

“And why not, Jane? There is no shame in never being married. Not between us. Regardless, you have your garden and your house and your little stories. That should be more than enough to fulfil you.”

“Indeed, Mrs. Leigh, who could possibly wish for more?” Jane now spoke; clearly she’d had enough of the conversation.

Violet knew why Jane was so uncomfortable. No one could ever know that she had been married but everything had been taken away from her. Without realising it, Violet began tasting salty tears falling from her eyes.

“Yes, I could never want a husband to love me, to start a family with, to be my companion on this earth. What would be the sense in it? It should only be ruined by money and families and—”

“Jane, I am sure Mrs. Leigh is not interested in your rambling.” Cassandra tried to stop her sister from saying anything that might ruin her secret. Violet understood.

But where is your baby? Is she alive? Violet wanted to ask.

“I rather fancy some tea,” said Jane. “I find this particular chapel dull and draughty. Ladies?”

Cassandra and Jane followed Elizabeth Leigh out the door that led back into the house. Violet saw Jane turn and look back for a moment, but she couldn’t know whether Jane was looking at her or something else in the room. Just like that, they were gone. Violet blinked a few times, not knowing whether they planned to return. She knew she couldn’t have seen this conversation before, but it felt familiar. It’s Fanny Price, she realised. It’s Lady Bertram telling Fanny what a comfort she is to the family, and how she can never leave them, and all the while Fanny is secretly in love with Edmund. Violet had thought Jane might have used the tumultuous details in her own life to help craft her novels, but she hadn’t realised just how much truth was hidden in their pages. Amazing. After sitting in silence a few minutes more and wiping her eyes, Violet went back to the garden and found Peter guarding the door. 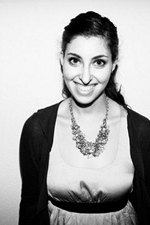 Rachel Berman was born and raised in Los Angeles, which naturally resulted in a deep love of the UK from an early age. Reading and writing have been favorite pastimes for as long as she can remember. Rachel has a BA in English Literature from Scripps College and an MA in London Studies from Queen Mary, University of London. Her focus is 19th century British Literature. She enjoys hiking, musical theatre, fancy water, Pilates, vegan baking, good TV and movies, and researching new book ideas!

Jane Austen has always been an author near and dear to Rachel’s heart for her ability to tell a story so compelling, it remains relevant hundreds of years later. And, for creating Henry Tilney.

21 thoughts on “A Preview & Exclusive Excerpt of Aerendgast: The Lost History of Jane Austen, by Rachel Berman”