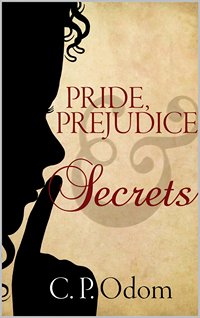 Last year I had the pleasure of being introduced to Jane Austen fan fiction author C. P. Odom via his novel Consequences. His writing invoked deep feelings, as he was able to draw me in completely to his story. He had me fully enveloped in his characters and their lives, which resulted in Consequences being one of my favorite reads of 2014. When I heard about his latest “what-if” novel, Pride, Prejudice and Secrets, I immediately began searching for a way to receive a review copy.

Secrets tells the tale of our beloved Lizzie and Darcy in Jane Austen’s Pride and Prejudice, although it’s Elizabeth now instead of Jane who falls ill in an untimely manner. Darcy has just worked up the courage to deliver an ill-conceived and prideful offer of marriage, and Elizabeth, still in a haze and unsteady from sickness, accepts his offer. When she fully recovers from her ailments, however, she is mortified to learn that she is betrothed to “the last man in the world whom I could ever be prevailed on to marry.” Not only this, but all of society has become accustomed to the prospect, so for her to break off said engagement would be the equivalent of social banishment, not to mention the effect it would have on her unmarried sisters. How, then, is she to avoid this unfortunate misunderstanding and escape with her and Darcy’s pride unharmed? She has to use every ounce of her sharp wit and captivating personality to pull off this accomplishment. Will she be forced to remain with Darcy or will she be able to extract herself with her reputation intact?

For those of you who have read Consequences, let me forewarn you that this particular work is not as dark as I had imagined that all of Odom’s works might be. I had prepared myself to be emotionally devastated again, and interestingly enough this work did not go as deep emotionally, which may make it better suited for a first-time reader of Odom.

Just as in Consequences, Odom was able to tap into this deep well of emotion and make me care about the plights of the characters. Elizabeth and Darcy are not the only characters whose stories are re-written. Caroline, Bingley, Jane, and Wickham are all given special attention. The originality showcased in altering the stories of these four characters is a testament to Odom’s strong writing style. Much of the book is about Lizzie discovering her own pride and prejudices via an internal monologue, which I found to be an interesting plot device. Rather than figuring this out by sparring with Darcy, she observed the interactions of Darcy with her loved ones and would then reevaluate her former thoughts and assumptions about the man. This was a great way to track Elizabeth’s growth as a character and it definitely kept me hooked throughout.

Odom’s penchant for historical research is well-represented in the story, but most especially in Wickham and Col. Fitzwilliam’s storylines. What could be dry and droll fact regurgitation actually makes for some edge-of-your-seat storytelling. Creative, imaginative, and well-characterized, Odom has a sure hit on his hands with Pride, Prejudice, and Secrets. If you’re already a fan or if you’ve never had the pleasure of reading any of his prior work, do yourself a favor and pick this one up.

9 thoughts on “Pride, Prejudice and Secrets by C. P. Odom – A Review”