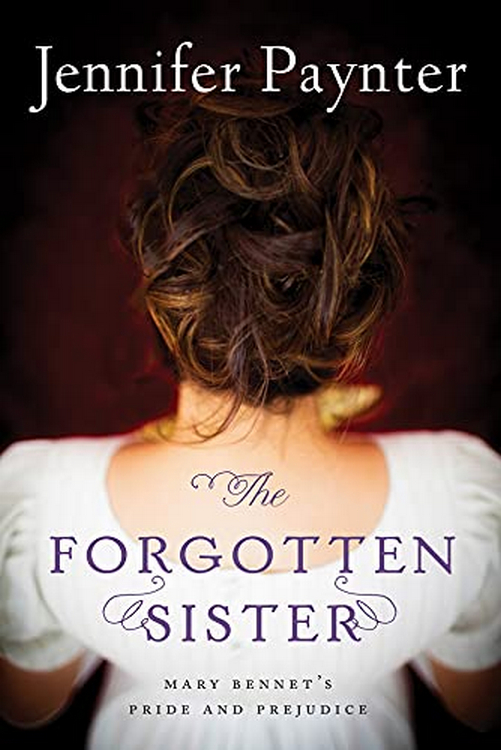 With only half a dozen speeches in Pride and Prejudice Mary Bennet still manages to make an impression. Bookish, socially awkward, and prone to moralizing, it’s hard to picture her as the heroine of a romance novel. Though I’d laugh along at her cluelessness Mary has always had my sympathy, so when I discovered Jennifer Paynter’s The Forgotten Sister: Mary Bennet’s Pride and Prejudice I couldn’t wait to read it. Would this book rescue Mary from the shadows of Pride and Prejudice? I hoped so.

The Forgotten Sister opens before the events of Pride and Prejudice, with Mary recounting her story in her own words. She begins with an admission of early worries, “For the best part of nine years–from the age of four until just before I turned thirteen–I prayed for a brother every night.” (8)  By then family life is strained, but early on Mr. and Mrs. Bennet are carefree and happy. Young Jane and Elizabeth are doted on by their parents, who are optimistic there is still time to produce a male heir and secure their entailed estate. Everything changes though when Mary, a third daughter, is born. Worries set in. The Bennets begin bickering. About a month after Mary’s birth Mrs. Bennet has an attack of nerves so acute that Mary is sent away to a wet-nurse, Mrs. Bushell, with whom she stays for several years.  From then on, neglect by and separation from her family become recurring patterns in Mary’s life.

The Forgotten Sister provides new background to explain Mary’s personality. A frightening encounter when she is young makes her timid and tongue-tied. The kindness shown by her pious instructor pushes Mary toward rigid religious beliefs, though the harsh moralizing mini-sermons she sometimes gives are just an awkward girl’s attempt to join the conversation. Because all four of her four sisters are paired in close bonds, Elizabeth with Jane and Lydia with Kitty, Mary is left without a close companion in the family, and being often on her own does not help her acquire social skills.

At the assembly dance where Jane catches the eye of Bingley and Elizabeth begins her antipathy for Darcy, Mary has her own pivotal encounter. She bumps into the handsome son of her former wet-nurse as he races up the stairs to join his band, and then Mary can’t stop trying to spot Peter Bushell through the crowd. Though far beneath Mary in station, he’s a talented musician. When their eyes meet as he is playing his fiddle he smiles and, she cannot help herself, she smiles back, though she then resolves to look at him no further because she “…could not possibly befriend a person of his order.” (110)

But Peter is kind during their brief encounters, leaving Mary alternately relaxed and flustered. Though her feelings are decidedly mixed she’s left with a strong desire to see him again. But would it be proper? Mary’s religion councils her that all people are equal in the eyes of God, but that’s not what society says. Increasingly drawn to Peter, Mary remains deeply divided. How does an inexperienced, devout girl decide what to do?

The unique slant and moving insights of The Forgotten Sister: Mary Bennet’s Pride and Prejudice kept the book in my hands any moment I had free. It’s fascinating to see younger versions of the characters from Pride and Prejudice, and events that took place before and after that story. I love when a novel incorporates fascinating bits of history or offers vicarious travel pleasures, and The Forgotten Sister has the surprising bonus of taking us by ship around the world to rough and tumble Australia when it is still part penal colony.

Still, Mary was difficult for me to like in the early pages of the book. Her feelings of anger and resentment toward her family are understandable, she’s often left out and sometimes ridiculed, but her spite could be hard to take. And my beloved Elizabeth, when seen through Mary’s eyes, does not seem quite as wonderful as before, which is disconcerting.

But the realism of Mary’s character and feelings ultimately adds to the strength of the novel. And there’s a good precedent in the original for enlivening the story by shaking up the reader’s comfortable notions. The first time I read Pride and Prejudice I abhorred Darcy just as much as Elizabeth did, so when he handed her that letter after his disastrous proposal at Hunsford Parsonage, I was as shocked and disoriented as she was. The Forgotten Sister provides some of that same, wonderful eye-opening catharsis, and by the end of the book, Mary has a new and promising future.

We received a review copy from the publisher in exchange for an honest review. Austenprose is an Amazon affiliate. Cover image courtesy of Lake Union Publishing © 2014; text Jenny Haggerty © 2014, austenprose.com

11 thoughts on “The Forgotten Sister: Mary Bennet’s Pride and Prejudice, by Jennifer Paynter – A Review”