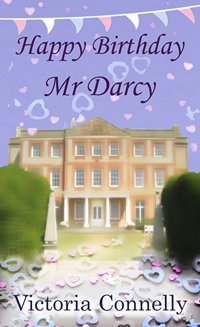 The Austen Addicts series has evolved through the years into a guilty pleasure for me. Happy Birthday Mr. Darcy is Victoria Connelly’s fifth installment in this contemporary romance series loosely inspired by Jane Austen’s Pride and Prejudice. The novella reunites us with her original characters from the first in the series, Weekend with Mr. Darcy, and opens a week prior to when Warwick Lawton (Austenesque author who writes under the female nom de plume, Lorna Warwick) is to pledge his troth to his Austen scholar/fiancé, Katherine Roberts.

Katherine is enchanted with the Regency themed wedding plans, her antique Russian engagement ring, and her empire-style gown. She had never seen anything so beautiful. Well, not since Matthew Macfadyen had strode across the dawn meadow in the 2005 adaptation of Pride and Prejudice. She really didn’t feel worthy of such a dress and it felt like a terrible extravagance to have something so lovely for just one day. Though passionately in-love with her fiancé, not unlike many brides, doubts about the marriage state and how her life is to change loom overhead right up until the wedding hour.

A colorful cast of characters with nods to Austen’s own characters, including Warwick’s marriage-cynic of a sister and his handsome, jovial best man, adds to the wedding festivities. Dame Pamela, a favorite from Weekend with Mr. Darcy, opens her manor home to host the wedding and quips these two Janeites are marrying the same year that Pride and Prejudice celebrate its two-hundredth birth. “Mr. Darcy is doing well for his age,” Dame Pamela said with a little chuckle. “Pleasing women for two centuries is no mean feat!”

It was autumn of 2011 when I first discovered Victoria Connelly. I was in high dudgeon as it was the weekend of the Jane Austen Society of North America (JASNA) Annual General Meeting (AGM) in Fort Worth, Texas and I would be missing the festivities. Austenprose blog mistress Laurel Ann Nattress had left me with a copy of A Weekend with Mr. Darcy, the first in the Austen Addicts series, as some consolation; I could not help but commiserate with Kitty Bennet when her sister Lydia left her home at Longbourn for her adventure at Brighton! Although not the thrill of attending an AGM Regency ball, Connelly’s first in her Austen Addicts series was a balm to my battered spirits. Since then, the Austen Addicts series continued: Dreaming of Mr. Darcy, Mr. Darcy Forever, and then the novella, Christmas with Mr. Darcy.

There are no big surprises in Happy Birthday Mr. Darcy. But I must agree with the sage Mr. Knightley from Emma: “Surprises are foolish things.” However, despite being a harmless bit of Austen pastiche, this little darling of a book was but a light, nibble of meringue that left me wanting more.