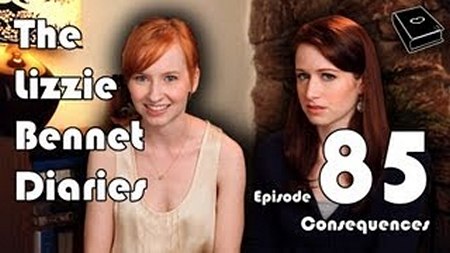 This week on The Lizzie Bennet Diaries I will be looking at episodes 85-89 and Gigi’s Domino videos. There was just too much to get through with the Lydia storyline to add in Jane and Bing, so I will save that for next week. These are emotionally packed videos, though a lot of the action happens off stage like it does in Pride and Prejudice. 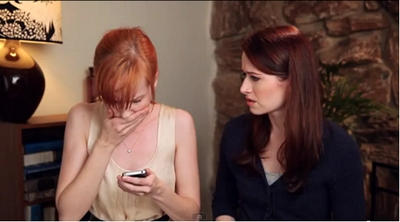 Lizzie rushes home from her internship at Pemberley Digital, Darcy’s Company, when Charlotte tells her about Lydia and George Wickham’s website. George videoed an intimate encounter between he and Lydia and sold it to a distribution company. The website was advertising the count-down to the release of the video. When Lizzie arrives home she thinks that Lydia knows about the website. It is only after she confronts Lydia that she reveals she had no idea about the site. Lydia stares at the website in horror and disbelief. She just keeps repeating, “This is a joke right?” Yet Lizzie knows it is no joke. George sold the tape without Lydia’s knowledge and never returns any of Lydia’s text, calls or tweets.

A main theme from this week’s videos is Lizzie and Lydia’s coming to terms with each other. Episode 87 makes me tear up every time I watch it. It is really wonderful, though it strays from Jane Austen’s original text which does not give Lydia and Elizabeth a chance at reconciliation. When Lydia returns home, she is gloating over her marriage to Wickham and pretends that her elopement was not scandalous. The fact that George abandons Lydia in The LBD is perhaps the best thing that ever happened to Lydia. It allows her to go back to her family instead of her remaining in his clutches.

In later episodes Lizzie blames herself for this fiasco. She thinks she could have prevented it if she would have just talked to Lydia or been there for her. Yet in episode 85, she acknowledges George’s power over people when she says, “George has a history of convincing smart women to do dumb things.” I think this is a direct reference to Gigi, but it might also be an indirect reference to herself. George helped to convince her that Darcy was rude, and spiteful. Lizzie and the viewers can see George’s power to manipulate women when we looks at how he treated Gigi, Lizzie, and Lydia.

Lydia was vulnerable to George. She fell for him hard and quickly. She believed that he loved her, and to prove her love to him she let him film them. She was cut her off from her normal source of support (her sisters), which made her dependent on him. Lydia is devastated by George’s betrayal and questions her own self worth.  She says, “If he is all bad then what does that say about me?” Lizzie consoles her by saying, “You don’t deserve awful things to happen to you because you trusted someone who was there for you when no one else was.” Episode 87. These are powerful lines and really show Lizzie’s compassion for her sister. She doesn’t blame Lydia, but herself for not being there when Lydia needed her.

Lizzie proves that she is there for Lydia and apologies for not “really seeing her” before. Both sisters admit that they have been rather consumed with themselves and neglected their relationship with each other. This makes The LBD stand out from the novel by focusing on sisterly relationships. Lizzie and Lydia do reconcile in The LBD. In one of the most touching moments from the series, Lizzie hugs Lydia and cradles her in her arms saying, “I love you… I love you… You are not alone.”

Domino is a new communication application that is being developed by Darcy’s company, Pemberley Digital. Gigi Darcy (Darcy’s sister) does “test videos” to check out Domino’s features. Domino is suppose to be a “life revealing application.” The application can call by phone and video a conversation. The system is also suppose to auto-edit, auto-update and auto-upload the demo videos. In describing the Domino, Hank Green says, “Domino may be a fairly weird application in real-life terms, but it totally kicks ass for the purposes of this show in terms of giving us unedited real-time conversations that otherwise have no business being shared.” I think he is right. Domino might seems a little far-fetched, with its self editing videos and such, but I think it is mainly a plot device so that the application will auto update the videos even if Gigi does not want all of the information on the internet. 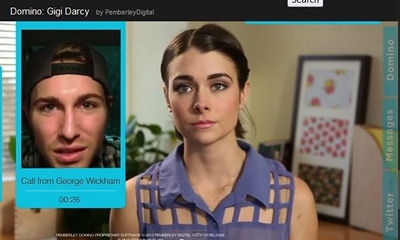 The Domino videos are interesting because they let us see more of Gigi, Fitz, and Darcy, and we get a glimpse into what they are doing to find George Wickham and take down the site. The videos are vague about how Darcy and Fitz are trying to take down the site, but we do know that they are working on it. Gigi also gets to play a role because she is the one who calls George and gets him to answer the phone and use Domino (thus download the app and accepting the terms and conditions which allows Darcy track him). We don’t exactly know how Darcy found him, or what they said to each other when Darcy confronted him, BUT I don’t think there were many nice words exchanged. Here are some of the tweets between Gigi and Fitz about the search for George

Jane Through It All

Jane is a wonderful support for both of her sisters throughout these videos. She comforts them and brings them tea saying, “Everyone deserves tea.” Her sweetness and astuteness really show how much she loves her sisters and how well she knows them. Jane truly is wise when she says, “It not about doing anything. Its just about being here and her knowing that she doesn’t have to go through any of this alone.” The sisters are there to remind Lydia that she doesn’t have to face the world alone. After the video comes down, Lizzie finally admits to Jane that she saw Bing when she was at Pemberley (but more on that next week).

THE VIDEO COMES DOWN

When the video is removed from the website in episode 88, Lizzie and Lydia are both grateful and thank whoever took the video down. They also apologize to each other. Lizzie says, “I am sorry I didn’t really know you.” and Lydia says, “I didn’t really let you.” Both sisters acknowledge their mistakes and move forward with their relationship.

These are the most serious videos in the series. They are also some of the most moving and most heartfelt because it is through adversity that the sisters begin to see each other in a new light. Though these episodes also stray from the novel, I think they stray in a way that makes the story stronger. Lydia is no longer a throw away character. The viewers have come to know and love Lydia’s much more in The LBD than the readers ever did in Pride and Prejudice. This investment in the character development is not wasted because Lydia is allowed to change and grow.

Next week I will be looking at episodes 92-100! I can’t believe the series is really over!

Don’t forget to check out the LBD Kickstart. They have some fabulous perks, and we want them to keep up the great work!

3 thoughts on “A Closer Look at The Lizzie Bennet Diaries: Episodes 85-89 and Domino Videos”