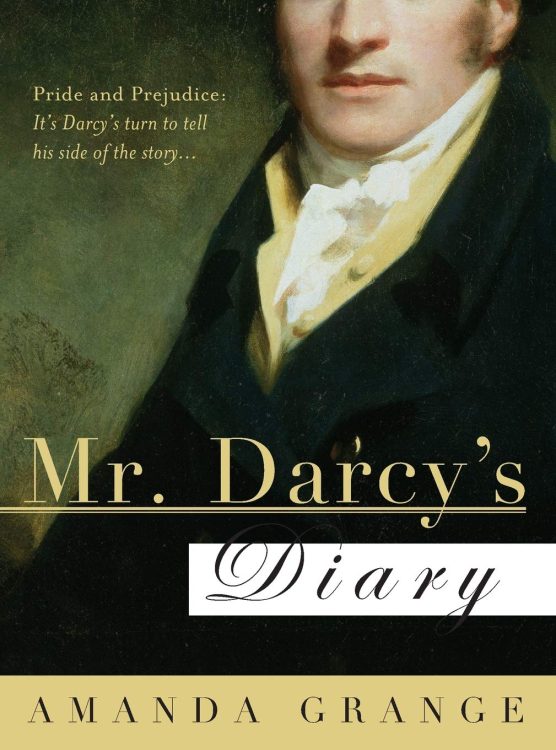 In 2005 author Amanda Grange gave Pride and Prejudice fans what they had been craving for centuries—Jane Austen’s classic story retold entirely from the perspective of its iconic romantic hero—Mr. Darcy. It was certainly not the first novel to explore this concept, but Mr. Darcy’s Diary remains, after many other attempts, the best in a very crowded field of Darcyiana.

I first read Darcy’s Diary eight years ago when it was released in the UK. I paid a fortune for the first edition to be shipped to the US. I did not regret it. My copy retains its place of honor on my Austen sequel bookshelf, along with the five other novels in her Austen Hero Diaries Series that Grange has since produced. She has a large international following for her work which she has earned through honest homage and clever craftsmanship.

Writing a first-person narrative of a classic hero who is a bit of a prig in the original story has its challenges. In Pride and Prejudice, the reader sympathizes with the heroine Elizabeth Bennet in her dislike of Mr. Darcy. We meet him and draw our conclusions of his personality from her perspective—he is a proud and disagreeable man—we see why she thinks so, but we do not know why.

Seeing the same events unfold from his eyes does not absolve him of his bad behavior, but as the narrative progresses, we are more sympathetic to his reasons. As we discover his inner thoughts and outward actions, our second impressions countermand his arrogant noble mien: we learn details of his chance intervention of the elopement of his sixteen-year-old sister Georgiana with his nemesis George Wickham; we see his management of his soft-hearted friend Charles Bingley and learn why he is guiding him by the manipulation of his confidence and Bingley’s sisters; we see his attraction to Elizabeth Bennet spark and grow from his original cool intolerance to his admiration of her “fine eyes” and saucy impertinence—and his puzzlement of her brusque behavior to him.

‘Oh,’ she said, ‘I heard you before; but could not immediately determine what to say in reply. You wanted me, I know, to say “Yes,” that you might have the pleasure of despising my taste; but I always delight in overthrowing those kind of schemes. I have therefore made up my mind to tell you, that I do not want to dance a reel at all – and now despise me if you dare.’

‘Did I really seem so perverse to her? I wondered. And yet I could not help smiling at her sally, and her bravery in uttering it.’ (40)

Close readers of Pride and Prejudice will recognize lines of Austen’s original dialogue (like Elizabeth’s speech to Darcy quoted above) interlaced with Grange’s new text. This ingenious co-mingling is seamless and we partake in many of the important passages where Darcy interacts with Elizabeth in the original novel, and then his private reaction. This works for this reader because Grange does not try to write like Austen in Elizabeth’s head, but as Grange in Darcy’s.

For those who are a student of character (like our heroine Elizabeth), it is interesting to observe our hero Darcy’s view of events from a male perspective. The whole Men are from Mars, Women are from Venus theory plays out beautifully and Grange takes full advantage of the differences in the sexes and how they think and react to the same scene when Elizabeth arrives at the Netherfield Ball.

“I continued walking towards her. ‘I am glad to see you here. I hope you had a pleasant journey?’ I asked. ‘This time, I hope you did not have to walk!’

I wondered if I had offended her. Perhaps she felt I had meant my remark as a slight on her family’s inability to keep horses purely for their carriage. I tried to repair the damage of my first remark.’” (51)

Clueless! There is some hope of improvement. As Darcy’s admiration of Elizabeth grows, it begins to humble his pride. While he is in Kent visiting his aunt Lady Catherine de Bourgh, we begin to see the change as he reacts to Elizabeth’s explanation to Darcy’s cousin Colonel Fitzwilliam of his behavior when they first met at the Meryton Assembly.

“In her eyes, my refusal to dance became ridiculous, and I saw it so myself, for the first time. To stride about in all my pride, instead of enjoying myself as any well-regulated man would have done. Absurd! I would not ordinarily have tolerated any such teasing, and yet there was something in her manner that removed any sting, and instead made it a cause for laughter.” (78)

Even though many will know the final outcome of the story, Grange keeps us in suspense by adding new scenes and inner thoughts that only Darcy would be privy too—and now we are too. What fan of Pride and Prejudice, and Mr. Darcy, could possibly resist reliving a cherished novel and walking in his shiny, black Hessian boots? I couldn’t.

We received a review copy from the publisher in exchange for an honest review. Austenprose is an Amazon affiliate. Cover images courtesy of Sourcebooks © 2007; text ©2013 Laurel Ann Nattress, austenprose