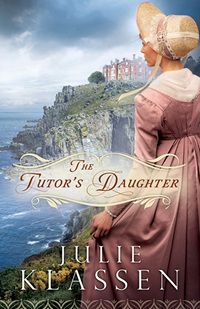 In keeping with her much loved style of traditional Regency romances, Julie Klassen has recently published her sixth novel, The Tutor’s Daughter, a romantic mystery set in Regency England. This novel blends the satisfying romance of Jane Austen with the Gothic surprises of Charlotte Bronte, coming together in a delightful style that is all the author’s own.

Ever since her mother died, Emma Smallwood has helped her father run his all-male boarding school. At twenty-one, she has found her time consumed by the many school-related burdens that her father, in his grief, has ignored; teaching history, geography, and math, as well as trying to make ends meet for the quickly failing academy, with only a few moments to spare to dream about travel and adventures of her own. But just when the last pupil graduates and Emma runs out of all options to restore Smallwood Academy to its glory days, a letter arrives offering a new position to both Emma and her father, as tutor and tutor’s daughter for one year at Ebbington Manor along the stormy coast of Cornwall. While her father is overjoyed to leave the place that reminds him of his departed wife, Emma unearths long-buried memories, ones that remind her of two particular pupils from her father’s academy. Phillip Weston, of the kind blue eyes, warm friendship, and stolen kiss, and Henry Weston, of the flashing green eyes, malicious pranks, and partner in one hard-to-be-forgotten dance. Emma has discovered that the letter and advantageous job opening is from none other than Lord Weston, the father of both her friend and her nemesis.

On her arrival at Ebbington Manor, Emma is disconcerted by the mysteries that seem to be in every dark corner and abandoned wing of her new home, as well as in the lives of everyone she meets. She and her father arrive virtually unexpected and are treated with suspicion from Lady Weston and disdain from Rowan and Julian Weston, the twins they are to teach. From the desperate cries that wake her in the middle of the night, to the hauntingly beautiful piano music that no one admits to playing, Emma is torn between staying uninvolved and seeking out the answers to all her questions on her own. But when she receives bloody threats and the animosity of Mr. Teague, the local who makes a living from salvaging cargo from wrecks, Emma finds herself caught up in a whirlwind of treachery, not knowing who to trust. Should she trust Lizzie, Lady Weston’s young and mercurial ward, Philip, who is the same friendly and flirtatious man she remembered, or Henry, who has transformed into a man of resolve and courage? With her life in danger and her faith in God tested, Emma must make her choice and discover the answers to all the many secrets, even those of her own heart.

The Tutor’s Daughter is definitely a novel of suspense. Every character–every chapter–has some newly uncovered mystery or clue. Sometimes this got to be a bit much—as I was reading I tried to tie in all the individual “clues” to one big mystery, only to discover that there were literally nine different secrets, large and small, that are all revealed at the end. At 409 pages, this should be considered an epic. Julie Klassen seemed to want to add everything possible to this book, from historical anecdotes about Cornwall, wreckers (those who salvage leftover cargo from wrecks), and special needs children, to romantic peril tied in with faith in God. All of this together made for a well written and exciting, if sometimes exhausting, read. Some of the most interesting parts of this book were Emma’s flashbacks of her growing-up years at her father’s academy. They provided much-needed insights into who Emma really was since at the beginning of the book she seems more repressed (busy as she is with taking care of her father and the school). Her past relationships with Henry and Philip Weston are slowly revealed by flashbacks chapter by chapter, so almost like an onion (or a flower if you’d rather a more romantic allusion), her back story is revealed layer by layer. By the end of the novel, I found myself, almost without realizing it, very much attached to the main characters, much more so than when I first met them.

One of my favorite parts of The Tutor’s Daughter is Henry’s point of view past and present. Through his eyes, you can see his take on some of the same events that Emma remembers (and cringes at), sometimes from a drastically different angle.

On a whim, he decided to toss pride aside and try transparent honesty instead. “Do you recall the last time you and I danced? I am afraid I was rude to you.” She ducked her head, embarrassed. “You didn’t like being forced to dance with me than any more than now, I imagine.” It was his turn to be taken aback. “Miss Smallwood, you are mistaken. I am very much enjoying dancing with you.” She stole a glance at him from under her long lashes. “And the last time we danced?” He grimaced, almost wishing he hadn’t brought up the past. “I had a dashed wart on my hand and was afraid you’d be repulsed.” She looked up, a grin quivering on her lips. “That was all?”

“That was enough. Dashed embarrassing.”

Her grin widened. He wasn’t sure if he liked her reaction or not. She seemed to be enjoying his mortification a bit too much. She said, “You might simply have said so.”

“In front of that lot? Never. Probably would have given me the nickname Wartson before the day was up.” p. 204

“I have a good stance. Let me help you.” She grinned. “Just try to remain vertical so you don’t butt me with your very large head.”

He smirked up at her. “One wonders how I’ve found hats to fit me all these years.”

“I imagine your hatter is exceptionally well paid.” He placed his hand in hers but warned, “If I start to fall, let me go. Do you hear? I don’t want to have to put my back out lifting you up again.” p. 349

She walked through the water, her steps made slow and arduous by heavy, sodden skirts. Her eyes remained fastened on his. Another wave sprayed through the window, pelting Emma’s face. Her eyes filled with tears, too many to be blinked away, and salt water both warm and cold ran down her cheeks. She saw answering tears in his eyes. And somehow she knew the tears were not for himself but for her.” p. 348

–that made the climax, as well at The Tutor’s Daughter as a whole, a book well worth the read.

7 thoughts on “The Tutor’s Daughter, by Julie Klassen – A Review”