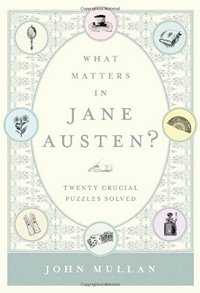 From the desk of Sarah Emsley

“The closer you look, the more you see,” writes John Mullan in What Matters in Jane Austen? Elizabeth Bennet learns this lesson in Pride and Prejudice when she reads and rereads Mr. Darcy’s letter “with the closest attention” to understand why he separated Bingley from Jane and why he doesn’t trust Wickham. Mullan’s compelling analysis of detail in Jane Austen’s novels persuades us that “Little things matter.” In a series of chapters on what he calls “puzzles,” he asks questions about details and discusses how and why they matter. In the process, he demonstrates that the popular pastime of answering quizzes about the novels is not necessarily trivial, but can lead us to a deeper understanding of Jane Austen’s careful craftsmanship and her innovative contributions to the history of fiction.

Mullan pays attention to everything from the ages, names, looks, reading habits, sex lives, incomes, and deaths of Austen’s characters, to the narrative techniques she uses when she shows us their thoughts, when she breaks the pattern of narration to address her reader directly, and when she departs from the consciousness of her heroine to give the point of view of another character. Details about income, for example, show how in Mansfield Park “The reader truly attuned to the value of money should know that the Price family could live a more comfortable life than they do.” Mullan makes the excellent point that “Willoughby reads his way into the Dashwoods’ hearts”—and that while the 1995 film of Sense and Sensibility shows Willoughby and Marianne reading Shakespeare’s Sonnet 116, in the novel they read Hamlet, a choice of play that “testifies to the literary seriousness of the Dashwoods, and to the willingness of Marianne’s suitor to take on the most demanding parts.” When he asks “What Makes Characters Blush?” he shows how Austen uses blushes to signal guilt, which sets her apart from other contemporary novelists whose heroines blush virtuously, and he points out that the spontaneous “Austen blush” is nearly impossible to perform on screen or stage.

Austen wants her readers to think about sex and death, although she is not always obvious about the way she calls our attention to these matters. From the first line of Pride and Prejudice, in which we’re asked to believe the universal truth about a rich bachelor’s desire for a wife, “Austen’s stories rely on an acknowledgment of men’s sexual appetites,” writes Mullan. Very few deaths happen within the novels—only Mrs. Churchill in Emma, and Dr. Grant and Lord Ravenshaw’s grandmother in Mansfield Park—yet Mullan shows how the responses of Austen’s characters to these deaths and others, such as the deaths of Fanny Harville, Sir Walter Elliot’s still-born son, and Lady Susan’s husband, tell us much about the living. While he argues that such details about money, reading, blushing, sex, and death matter because they “reveal people’s schemes and desires,” however, he focuses more on what they tell us about social history and Austen’s narrative strategies than on what they say about her understanding of psychological complexity and her moral vision.

At times Mullan overstates his case or doesn’t fully develop his argument. After discussing the often-overlooked role of the lower classes in the novels, he concludes, “the servants see everything.” While he’s right to claim that “we as readers should see them watching and listening,” there are still many private scenes and conversations they do not witness. In discussing right and wrong ways to propose marriage, he claims that a “good man” would be bound to honor his first proposal, as Edward Ferrars does in Sense and Sensibility, but “A woman … can change her mind.” I wondered why he doesn’t explore the question of whether Austen believes a “good woman” may reverse her decision after accepting a proposal. The women he cites who change their minds, including Lucy Steele, do so for radically different reasons. Lucy’s moral character is not improved by her decision not to marry Edward Ferrars, even though the decision improves his life and that of Elinor Dashwood. When Mullan discusses why Austen’s plots rely so much on “blunders,” he suggests that a line from the ending of Emma could serve as a motto for her fiction: “Seldom, very seldom, does complete truth belong to any human disclosure.” At the same time, however, his own approach in reading and rereading the novels, just as Elizabeth reads and rereads Darcy’s letter “with the closest attention,” points to another line from the novels that could equally serve as a motto. Almost no one tells the complete truth, but Austen suggests it’s always worth paying attention to the details to get as close as possible to it.

Little things do matter in Jane Austen because they tell us about bigger things. Janeites, rejoice! This beautifully written book about Austen’s six major novels, plus Lady Susan and the unfinished novels Sanditon and The Watsons, is both a helpful, highly readable guide to Austen’s work, and a scholarly contribution to criticism that analyzes Austen’s achievement. Such books are rare. Mullan argues persuasively that Austen knew she was creating a kind of fiction quite different from what her contemporaries and predecessors produced, and he highlights her successful experiments in conveying the thoughts and inner lives of her characters (pioneering the technique that later came to be called “free indirect discourse”).

What Matters in Jane Austen is a thoroughly engaging close reading of Austen’s fiction that encourages us to read closely to see and understand even more. I can’t help but wish, however, that Mullan would take his argument even further: little things matter not only because they show us Austen’s “extraordinary narrative sophistication,” as he concludes, but also because they reveal the subtleties of her insight into the moral lives of her characters. Ethics matters in Jane Austen, as well as craft.

16 thoughts on “What Matters in Jane Austen?: Twenty Crucial Puzzles Solved, by John Mullan – A Review”