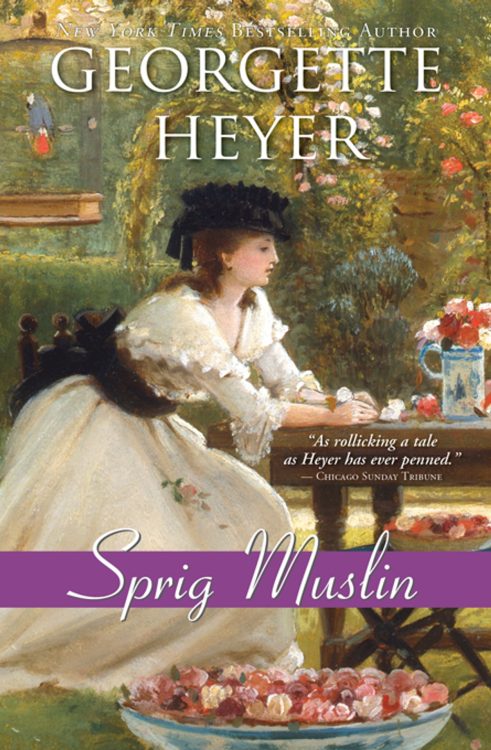 From the desk of Laura A. Wallace:

Georgette Heyer’s Sprig Muslin is one of her most entertaining Regency novels.  It is a “road book,” full of adventures, comical situations, and fun characters.

At the outset, I must beg anyone who leaves a comment to avoid spoilers.  New readers should have the pleasure of discovering Amanda’s antics, their consequences, and who feels what for whom, on their own.

Sir Gareth Ludlow is one of society’s best-loved bachelors.  We first meet him calling upon his sister, whose offspring consider his visit to be a high treat:

“Watching him, as he contrived, while displaying over and over again for the edification of little Philip the magical properties of his repeating watch, to lend an ear to the particular problem exercising Leigh’s mind, Mrs Wetherby thought that you would be hard put to it to find a more attractive man, and wished, as she had done a thousand times before, that she could discover some bride for him lovely enough to drive out of his heart the memory of his dead love. . . but she had never been able to detect in his gray eyes so much as a flicker of the look that had warmed them when they had rested on Clarissa Lincombe.”

Clarissa had been beautiful, vivacious, and headstrong.  She and Gareth were considered a perfect couple—and so they were until she managed to break her neck in a carriage accident, trying to prove her mettle by driving Gareth’s spirited horses without permission.  Seven years later, he has never fallen in love again, and come to the conclusion that he must marry without it.  So he decides to offer for one of his oldest friends, the Lady Hester Theale, who is as unlike Clarissa as it is possible to be.

But on his way to pay his addresses to Lady Hester at her father’s country seat, he encounters, quite by chance, a very young but resourceful and determined lady named Amanda, who has run away from home and has a remarkable facility for making up stories.  She is obviously an innocent girl, and Gareth reluctantly takes charge of her, with the intention of restoring her to her family.  Unfortunately, she refuses to tell him her name, so he resolves to take her to London and entrust her to his sister’s care until he can discover her identity.  But in the meantime, he takes her to Lady Hester, knowing he can rely upon her kindness to allow her to stay overnight, and so she does.  But Amanda runs away, and their highly entertaining adventures form the rest of the novel.

The people they encounter during their travels, from the Hon. Fabian Theale, Hester’s uncle, to Hildebrand Ross, a young gentleman who is a poet, enjoying his first Long Vacation on his own, to Barnabas Vinehall, who was a friend of Gareth’s father, the cast of secondary characters help them along in what would film (if only we could be so lucky and someone would write the screenplay) as a classic screwball comedy, or perhaps an Oscar Wilde play.

This novel shows Heyer’s skills at the top of her form, with a tight plot, delightful and deftly-drawn characters, plenty of wit and humor, and an ensemble ending second only to those in The Grand Sophy and The Unknown Ajax.

We received a review copy of the book from the publisher in exchange for an honest review. Austenprose is an Amazon affiliate. Cover image courtesy of Sourcebooks Casablanca © 2011; text Laura A. Wallace © 2011, austenprose.com. Updated 9 March 2022.

9 thoughts on “Sprig Muslin, by Georgette Heyer – A Review”