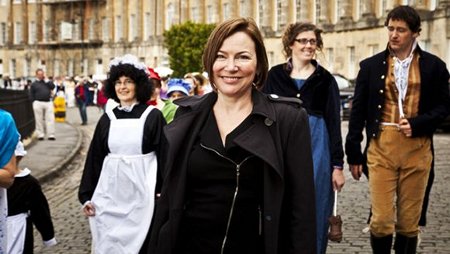 Historian and television celebrity Amanda Vickery’s documentary on the fandom of Jane Austen aired in the UK yesterday on BBC. The Many Lovers of Miss Jane Austen contains Vickery’s observations on Austen’s fame with interviews of scholars and fans.

To mark the 200th anniversary of the publication of Jane Austen’s first novel, Sense and Sensibility, Amanda Vickery explores the writer’s fluctuating popularity and the hold her fiction has on readers today. She talks to literary scholars, film directors and costumed devotees at Austen conventions to consider why the plots and characters continue to delight, amuse, console and provoke, argues that different generations see their own reflections in the stories, and watches a rare, handwritten manuscript of an unfinished Austen novel go under the hammer at Sotheby’s. Featuring contributions by Andrew Davies, Charles Spencer and Howard Jacobson.

I attended the Jane Austen Society of North America’s AGM in Fort Worth, Texas last October and had the pleasure of meeting Prof. Vickery.

She was there with a full film crew to record many of the events during the conference including speaker Andrew Davies, the screenwriter of the A&E/BBC miniseries of Pride and Prejudice (1995) and many other Austen film adaptations, and interviews of some of the attendees. Two of my fellow Puget Sound JASNA members are featured in the documentary: Mary Laney and Kimberly Brangwin. Here’s a clip:

No news yet if The Many Lovers of Miss Jane Austen will air on North American or elsewhere, but this highly anticipated documentary is only rivaled by another BBC documentary, Jane Austen: The Unseen Portrait? which airs on the BBC on December 26th, 2011 in the UK. Geesh. Us US Janeites have to wait (or have other illegal resources) to see everything good on this side of the pond.

Jane Austen is one of the most celebrated writers of all time but apart from a rough sketch by her sister Cassandra, we have very little idea what she looked like. Biographer Dr Paula Byrne thinks that is about to change. She believes she has come across a possible portrait of the author, lost to the world for nearly two centuries. Can the picture stand up to forensic analysis and scrutiny by art historians and world leading Austen experts? How might it change our image of the author? And what might the portrait reveal about Jane Austen and her world? Martha Kearney seeks answers as she follows Dr Byrne on her quest.