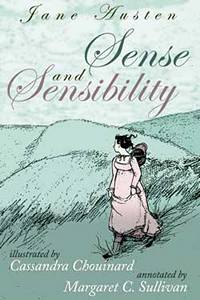 As 2011 marks the 200th anniversary of Jane Austen’s first published novel, Sense and Sensibility, we are offered another annotated edition to help us understand the social and historical context of the world that Jane Austen places us into in late eighteenth century England.

The Sense and Sensibility (The Jane Austen Bicentenary Library) is the first Jane Austen novel, in what I hope will be the bookend of Jane Austen’s six major works, to be offered in eBook format from Girlebooks. Yes, the format is digital gentle readers – and I think it quite appropriate that Margaret Sullivan is leading the way for us as its annotator. Many know Margaret as the editrix of AustenBlog.com, but she is also a strong advocate of digital books, and has for many years been waving their flag in attempt to prepare us for the inevitable. That time has come. This is the first book I am reviewing for Austenprose that is being produced solely for the digital market.

Sense and Sensibility is the tale of two sisters, Elinor and Marianne Dashwood, each cut from the same cloth, yet facing financial, social and romantic trials together from totally different perspectives, and – with varying degrees of hardship and success. Level headed and practical Elinor is the older of the two and often the only one in the family to keep her widowed mother and impetuous younger sister on a straight path. Marianne is wildly romantic and hell-bent to stretch the limits of proper decorum into the next county. Three men will change their life paths: Edward Ferrars, a reserved and stoic eldest son whose family aspires to greatest, yet he craves the simple life a country parson; Colonel Brandon, retired from the army and from love because of the loss of his first love many years hence; and Mr. Willoughby, handsome, charming and impassioned, but at a price. As the young ladies search for love, honor and financial security, Austen weaves in a rich social tapestry of minor characters, social commentary and the dry humor that she is renowned for.

While Sense and Sensibility offers some recognizable themes of the era of financially challenged young women searching for love and security in a society whose constraints sharply narrow their possibility of success, Austen has infused deep social context as well. Of all of Austen’s six major novels, S&S is driven by legal inheritance laws of primogeniture in England and how women were affected by them. These can be very puzzling to the contemporary reader and Sullivan’s notes throughout the text can help smooth a few furrowed brows. For example, in Volume One, Chapter two “Mrs. John Dashwood now installed herself mistress of Norland; and her mother and sister-in-law were degraded to the condition of visitors.” This one sentence is the lynchpin of the novel. If you understand why the widow Dashwood and her three daughters are be to displaced, downsized in social standing, the rest of the narrative will all fit into place. If you don’t you’re in trouble and will miss much of the inside story that Austen wants you to experience. If you tap on the numbered endnotes within the text, it will take you to the explanation. Tapping on the number again will take you back to the text. It is that simple.

With only 97 endnotes, this edition is not as extensively annotated as this year’s The Annotated Sense and Sensibility, by Jane Austen, Edited and Annotated by David M. Shapard, Anchor Books (2011), however, it does contain: A biography of the authoress; A bibliography and further reading; Information and Jane Austen’s life and culture; Author’s having fun with Jane Austen’; Fiction inspired by Sense and Sensibility; Films adapted from and inspired by Sense and Sensibility; and a buoyant forward and an unerring eye by the annotator. The illustrations by Cassandra Chouinard add levity, but are not expandable, so it was difficult to appreciate any detail. One must also take a leap of faith and assume that this is an unabridged text, but what version used, is not stated.

The eBook is available in Adobe Reader PDF, Kindle/Mobipocket PRC, ePub & Microsoft Reader LIT for the modest price of $2.99. Yes, there are a lot of “free” editions of S&S out there to be had for digital readers. Don’t be fooled by “free” gentle readers. Not all eBooks are created equal. The expert formatting and craftsmanship exhibited by this Girlebook edition is well worth the value.  For a middlin’ annotated edition, this Bicentenary Library presentation is “everything that is worthy and amiable.”