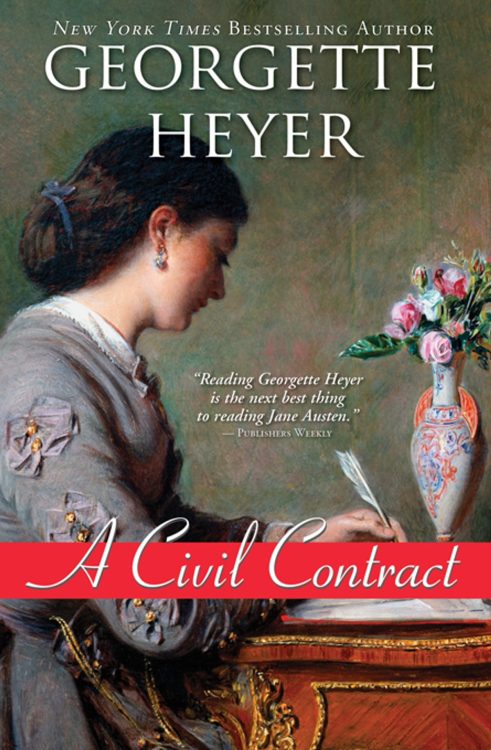 From the desk of Laura A. Wallace:

A Civil Contract is an atypical Georgette Heyer novel.  While the setting is firmly Regency, beginning at the time of the Battle of Orthez (February 1814) and ending with that of Waterloo (June 1815), it is neither lively nor witty.  It is a quiet book, with a love story that grows gradually, without any sparkle or adventure.  The eponymous contract is a marriage contract between an impoverished, newly-acceded peer and a wealthy “Cit” (Citizen of the City of London)’s daughter.  It is an inauspicious beginning:  the aristocrat is in love with someone else, the bride is homely, and the Cit is vulgar.

However, what follows is a sensitive, nuanced exploration of human relationships that from today’s perspective may seem almost quaint:  commitment, respect, duty, honor, fidelity, civility, resentment, and generosity.  I say “quaint” because the most cursory glance at current divorce and familial statistics show an absence of almost all of these qualities (saving resentment) to such an extent that a marriage and family where they prevail seems almost naïve, or even alien.  Imagine a marriage where commitment, civility, and respect are more important than passion and romance, even at its inception, yet fidelity and appreciation are also central.  This isn’t a “romance” novel:  it’s an “intimacy” novel, in a non-sexual way.  (The couple does have sex, though the only way you know this for certain is that they have a baby:  Heyer almost never writes about sex directly.)

Money plays a big role in the novel, and a feminist reading would no doubt analyze the connection between money and sex.  But I think that to reduce it to money and sex would fail to do it justice in almost every respect.  Yes, of course, the contract is an exchange of money for a social position that is literally consummated on the body of the woman, but that is the least important aspect of the situation.  The real story is how they grow together and create something new:  a lifetime together based not on physical urges but in common goals and a determination to make it work and find contentment.  When money comes to the fore, it is more usually (though certainly not always) a point of contention between the hero and his father-in-law rather than his wife:  it highlights the differences of class and the meaning of nobility (which, in Heyer’s world, is not always exclusively associated with a character’s station at birth).   With more time and space, I could take it a step further, and analyze the tension between money and power being played out over the pregnancy.

Despite the serious overtones, the novel does not lack for the comic relief or the masterfully-drawn secondary characters at which Heyer excels.  The most notable is the Cit (the father-in-law), who is hopelessly vulgar, but also shrewd, generous, and kind.  (In her new biography of Heyer, Jennifer Kloester describes him as “one of [Heyer]’s comic triumphs” and quotes her as saying that he continually “tried to steal the whole book, & had to be firmly pushed off the stage.”)  The recently-widowed dowager peeress, on the other hand, is languishing but selfishly manipulative, and when these two strong-willed persons encounter one another, she is completely nonplussed, while her elder daughter cannot help but “regard him with much the same nervous surprise as she would have felt at being addressed by an aboriginal.”  Even more entertaining is the clash of titans between the Cit and the hero’s aunt, who presents the bride at court.  She routs him completely, leaving him in the unfamiliar circumstance of having nothing to say.   Further amusement comes from the hero’s second sister, an irrepressible damsel not yet out who initially conceives the idea of saving the family fortunes by becoming a famous comedic actress, an ambition that survives (even after her brother’s marriage) until she encounters Kean’s performance in Hamlet, when she decides that she must become a tragic actress instead, in order to play opposite him.

Many Heyer fans name A Civil Contract as their favorite Heyer novel.  I personally have found that my appreciation of it has grown over the years, and I did not always like it so well as I do now.  I once thought it was a sad book, but I no longer think so:  it is a hopeful book, and ultimately a very positive one.

The Sourcebooks edition is typical:  a lovely (though Victorian) cover, good paper, and an easy-to-read typeface, with only a few “scannos,” one of which is “Playoff” for General Platoff.

We received a review copy of the book from the publisher in exchange for an honest review. Austenprose is an Amazon affiliate. Cover image courtesy of Sourcebooks Casablanca © 2011; text Laura A. Wallace © 2011, austenprose.com. Updated 9 March 2022.

32 thoughts on “A Civil Contract, by Georgette Heyer – A Review”