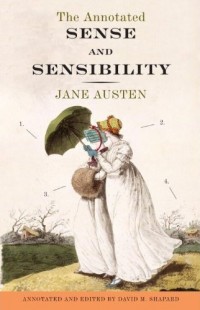 How appropriate that The Annotated Sense and Sensibility is being published during the bicentenary year of Jane Austen’s first published novel.

This new book includes the complete text of Jane Austen’s classic with annotations by Dr. David M. Shapard, an expert in eighteenth-century European History who also brought us similar annotated editions of Pride and Prejudice in 2007 and Persuasion in 2010. I enjoyed both of his previous works. I find annotated editions of classics fascinating, especially if they are written from the perspective of historical and social events and not weighed down with scholarly opinions. Dr. Shapard’s agenda here is obviously to enlighten the reader by opening up Austen’s two hundred-year old text with facts, tidbits, asides, and information that a novice reader or veteran can relate to so they can appreciate the story even more.

This volume weighs in at a hefty one pound and six ounces and contains 784 pages of wow factor for any Jane Austen fan or literature lover. Jane Austen’s complete and unabridged text is included on the left hand page and the enumerated annotations on the right. No stone has been left unturned. Even the illustration on the front cover depicting two fashionably attired Regency-era young ladies walking in the countryside with an umbrella receives its own corresponding page of enlightenment on the history of the umbrella, walking as an amusement, large muffs as a winter accoutrement, and an observation on the picturesque landscape depicted in the illustration. This keen sense of the era in relation to the text continues throughout the over 2,000 annotations including: textural explanations of historical and social details, black and white illustrations of art works, caricatures, cartoons and maps, definitions of archaic words, citations from Jane Austen’s life and letters, a chronology of the novel, extensive bibliography, fifteen page introduction by the editor, and his literary interpretations of plot and characters. It is a monumental achievement that I will spend years coming back to and exploring.

I know that there has been criticism of Dr. Shapard’s unscholarly approach to annotation in his two previous editions. He uses open and accessible language for the layperson, and for the sake of clarity, he repeats definitions so the reader does not have to jump back and forth throughout the book for answers. In my view, this is considerate and not tiresome as some have complained. After all, who is this book’s primary audience? Pleasure readers and students, or scholars?  If you are a scholar you should be seeking primary source material and interpreting it in your own style, as Dr. Shapard has chosen to do in this volume. Amusingly, I find objections to the un-pedantic qualities of his writing an irony that Jane Austen would take delight in.

Overall, this new edition was mesmerizing. My only complaint is that not every inch of the right hand page is packed to the brim with annotation – but I am a greedy Janeite. Retailing at $16.95, this is a bargain resource book that every Jane Austen and Regency-era history enthusiast should own.

40 thoughts on “The Annotated Sense and Sensibility, by Jane Austen, Edited and Annotated by David M. Shapard – A Review”