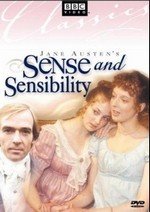 This 1981 BBC seven-part miniseries of Sense and Sensibility is a solid but flawed adaptation of Jane Austen’s masterpiece. In my mind, the character of Marianne Dashwood is always the benchmark for a superior adaptation. She is a complicated creature driven by emotion and racked with vulnerability, and if the actress portraying Jane Austen’s most melodramatic character can play her as intended, the whole production can rest on her shoulders. Tracey Childs as Marianne Dashwood exuded all the frantic emotion and romantic “sensibilities” that Marianne should at all the right moments, and Irene Richards as her sister Elinor was equally convincing, and at times touching, as her stoic, stable and guarded counterpart. However, my disappointment in the male characters: Edward Ferrars, John Willoughby and Colonel Brandon, pushed this production below my expectations. Part of this can be attributed to the loose adaptation of dialogue by screenwriter Alexander Baron and partly to Austen herself, who chose to craft male roles that are weaker than the two female ones. Yes. Not everything in Sense and Sensibility is balanced, and that was Austen’s point. Even though this imperfection is one of its charms, it can be unsatisfying. Here is the description of the production by the distributor.

Offering equal measures of humor and drama, this magnificent remastered  BBC production is an utterly charming version of Jane Austen’s Sense and Sensibility.

This delightful story tells of two sisters attempting to find happiness in the tightly structured society of 18th century England. Elinor, disciplined, restrained and very conscious of the manners of the day, represents sense. Outspoken, impetuous, emotional Marianne represents sensibility. Attracted to a man already promised to another, Elinor suffers silently to keep scandal away from her family. Marianne enjoys a flirtation with a handsome scoundrel that could lead to her downfall. Through their experiences with men and their relationship with each other, they learn that neither sense nor sensibility alone is enough, but that one must strive for a balance of the two.

The “magnificent remastered” boast makes one wonder what they had to start with? Considering that this was originally videotaped instead of today’s standard of digital film, we must make allowances, but it is still blurry and faded in comparison. The film locations are mediocre too. I have been truly spoiled by the 1995 Ang Lee and the 2008 John Alexander productions magnificent locations. The costumes exhibited the oddest colors and most unflattering of Regency styles in *gasp* polyester fabrics, and the screenwriter Alexander Baron chose to eliminate little sister Margaret entirely! (For shame)

What saves this 3 hour adaptation is the acting. Irene Richards, who you might recognize from her portrayal as Charlotte Lucas in the 1980 BBC Pride and Prejudice, is a solid oak who bends with the wind of change and shades her sister and mother from her own romantic pain. Her scene where Colonel Brandon asks her to inform Edward Ferrars of this offer of a church living was really moving. Tracey Child as Marianne happily did not play the melodrama over the top like Ciaran Madden did in the earlier 1971 production. I was amazed at the similarity of her interpretation to that of Kate Winslet’s 1995 version. Minor roles of note were Julia Chambers who plays cunning vixen Lucy Steele to a tea, and Amanda Boxer as stingy Fanny Dashwood. The scene where Fanny discovers that Lucy Steele and her brother Edward have been secretly engaged might be one of the best screaming scenes on film! Overall, an enjoyable but flawed production that could have benefited from more of Jane Austen’s beautiful language.