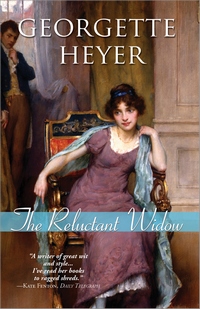 The Reluctant Widow, first published in 1946, was Heyer’s 32nd novel and her 17th Regency.  It was my first Heyer, and it hooked me completely.  I confess that I sometimes find it hard to differentiate one Heyer story from the next.  The headstrong heiresses and their plights tend to merge in my mind over time, but the heroine of The Reluctant Widow is different.  She’s still plucky and headstrong, but Elinor Rochdale has an appeal that transcends the other Heyer girls.  Maybe it’s the fact that she is a working girl, albeit one with pedigree; maybe it’s her inherent honesty.  You get the feeling that she simply couldn’t lie, however much she wanted to.  Unlike so many other Heyer heroines, Elinor is not a schemer.  She doesn’t have an agenda, other than to live decently and without a lot of fuss. She’s not out to hoodwink, bedevil, dazzle, or charm anyone, and this makes her so very appealing as a heroine.

Plus the story is first rate.  The plot is awfully convoluted, but the upside is that this means you can read it a few times and it still feels fresh. To begin with the beginning, we first meet Elinor when she is on her way to a new governess post—her aristocratic father died after losing all his money and she is determined not to live off her relatives. She accidently gets into the wrong carriage when the coach drops her off at her stop, and she ends up being talked into marrying an absolute scumbag of a man, who is dying and must marry so that he can leave his estate to a wife instead of the cousin he abhors. Turns out the cousin is a hero of the first order, Lord Carlyon, but Elinor finds him “odious,” which is actually Heyerian code for “simply irresistible.”

The mystery of the novel involves Elinor, Carlyon, and his flighty, tonnish brother Nicky figuring out what the heck is going on in the ramshackle house, Highnoons, which Elinor inherited when her husband died but a few hours after marrying her. Catherine Morland types will be delighted to know that the house comes complete with hidden staircases, secret entrances, and other wonderfully “horrid” attributes.

The Reluctant Widow is a perfect combination of mystery story and romance. Unlike so many of Heyer’s Regency Romances, it is not just about how a worthy young woman finds the right husband, but it provides a breathtaking historical whodunit as well.  Was Elinor’s late husband a spy for Napoleon, or was he just caught up in a web of treachery beyond his understanding? Will Elinor, Carlyon, Nicky, and his incorrigible hound, Bouncer, find the missing documents that detail the British army’s plans for the summer campaign before they fall into the wrong hands?

Heyer was absolutely at the top of her game when she wrote this novel—the dialogue sparkles, the plot is watertight and intricate, the red herrings are fresh, and the characters are interesting and comfortably recognizable without being stock.  It’s a pleasure to read such a perfect specimen of a genre.

The Reluctant Widow is one of only two Heyer novels that have been made into movies—the other is Arabella. The movie version of The Reluctant Widow, which was made in 1950, can be viewed on You Tube, and you can access it here. I have yet to find anyone who hasn’t declared it simply awful, which is such a shame because The Reluctant Widow, like so many other Heyer novels, would make an absolutely terrific film. Watch the movie if you dare, but make sure you read the book first!

Jane Greensmith is a lifelong devotee of classic literature who loves a good story and is always on the lookout for great writing and interesting perspectives.  She’s the author of Intimations of Austen, a slim volume of backstories, sequels and what-ifs for the Austen oeuvre.  When not reading, writing, or working, she coaxes plants to grow in the semi-arid Colorado soil, starts and occasionally finishes quilting projects, and fantasizes about time travel.  She named her blog Reading, Writing, Working, Playing so that could write about anything that strikes her fancy without danger of being accused of going off-topic. You can follow Jane on Twitter as JanetGS.

Enter a chance to win one copy of The Reluctant Widow, by Georgette Heyer (Sourcebooks, 2008) by leaving a comment stating what intrigues you about the plot or characters, or if you have read it, which is your favorite character or scene by midnight Pacific time, Monday, September 6th, 2010. Winners will be announced on Tuesday, September 7th, 2010. Shipment to the continental US and Canadian addresses only. Good luck!

40 thoughts on “The Reluctant Widow, by Georgette Heyer – A Review”