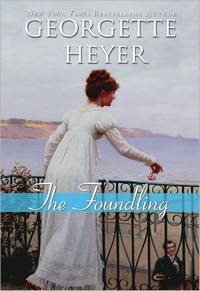 Guest review by Claire of The Captive Reader

Originally published in 1948, The Foundling was one of the very few Heyer Regency novels I had not read.  As is always the case when you’re working against a deadline, I had some trouble tracking down a copy (even the library large print edition had multiple holds!) but I found one and settled down for what turned out to be a very energetic and amusing read.

At twenty-four, the Duke of Sale (Gilly) is still being cosseted by his extended family and staff who, having gotten into the habit of caring for the Duke in his invalid youth, have not yet realised that he’s grown into a capable, if frustrated, young man.  When Gilly’s young cousin becomes entangled with the beautiful foundling Belinda and her enterprising guardian, Gilly immediately spies a chance to rebel against his protectors and to test his competence.  Quickly, he becomes entangled in an exhilarating adventure, and, with two rather troublesome dependents in tow, finds that he needs all his wits about him to manage the extraordinary circumstances into which he’s been thrust.

What fun this was!  It is truly an old-style romance, by which I mean an adventure tale with sinister villains, daring kidnappings, a beautiful damsel, and the appropriate comic relief.  Except that Gilly, for all his titles, is hardly the dashing hero such circumstances usually require.  It’s lovely to see how he grows and manages to handle the extraordinary situations on his own, having been cared for by others his entire life, but it is just as nice to know that such success is unlikely to go to his head.  Gilly, the reader is assured, shall remain as kind and stable as ever, only more confident of his own abilities and far more independent.

If you’re familiar with Heyer’s style and, more importantly, her plots, there won’t be many surprises here but that doesn’t lessen the enjoyment.  Indeed, part of the fun with any Heyer novel is comparing it to those you have previously read, recognizing a certain plot twist from one, a secondary character with a doppelganger in another.  Most obviously, The Foundling is very similar in plot to its inferior successor Charity Girl (originally published in 1970).  Indeed, Harriet from The Foundling is almost identical to Henrietta in Charity Girl, in name, personality, and fate.  Gilly has less distinct relations among Heyer’s heroes, being of a more gentle and retiring nature than most.  In his evolution though and the reactions of those around him, I can’t help but draw comparisons with Cotillion’s Freddy.  The Foundling truly distinguishes itself with its villains.  So few Heyer novels have any true villains but here we have swindlers and kidnappers and a very young, very poor excuse for a highwayman (hardly qualifying as a villain, he is however the only one to successfully get arrested).  Indeed, the chief villain is the brilliantly named Mr Liversedge, a name that Dickens himself would applaud.  Of course, because it’s Heyer, even the villain is treated to a very neat and quite extraordinary fate.

Considering the relative simplicity of the plot, The Foundling is a surprisingly long novel.  This length gave Heyer ample opportunity to show off her impressive period knowledge.  Typical of her stories with young male protagonists, there is perhaps an over-zealous use of Regency slang.  I personally adore it, but I imagine it could be disorienting for those new to Heyer’s style.  I particularly loved getting such a detailed glimpse into the male domain, usually relegated to the periphery of Heyer’s stories.  We’re treated to far more information on male pastimes and clothing than in most (any?) of her other books.  For me, it’s this obsession with detail, with creating a vivid and accurate sense of time and place that first established Heyer as one of my favourite novelists and keeps me returning to her books.

Claire is a twenty-something Canadian girl trapped in the corporate world, desperately seeking escape through an ever-expanding library and the world of book-blogging.  Having been introduced to the delights of Georgette Heyer by her grandmother during a summer visit as a teenager, Claire continually struggles to interest others in what they dismiss as “silly romances” and to prevent herself from using Regency slang in normal conversation.  She has had little success with either endeavour.  She began blogging as The Captive Reader in January 2010, having run out of coworkers, friends and family members willing to listen to her rant about her reading habits and interests.

Enter a chance to win one copy of The Foundling, by Georgette Heyer (Sourcebooks, 2009) by leaving a comment stating what intrigues you about the plot or characters, or if you have read it, which is your favorite character or scene by midnight Pacific time, Monday, September 6th, 2010. Winners will be announced on Tuesday, September 7th, 2010. Shipment to continental US and Canadian addresses only. Good luck!

30 thoughts on “The Foundling, by Georgette Heyer – A Review”