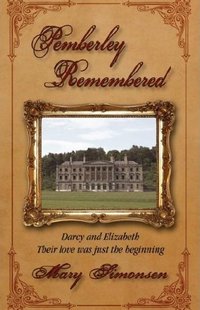 When I read the advance publicity on Pemberley Remembered, author Mary Lydon Simonsen’s debut novel about love, war and Pride and Prejudice, I was intrigued by the concept of three different romantic storylines interconnected through one hundred and fifty years of English history. Add to that a mystery involving the inspiration of Austen’s famous characters Mr. Darcy and Elizabeth Bennet, and you have my complete attention. This concept was definitely a new slant on the Pride and Prejudice sequel merry-go-round and I was motivated to find out if she could pull it off.

Simonsen gives us a likeable heroine in Maggie Joyce, a 22 year old American working for the Army Exchange Service in post World War II London. A devoted fan of Pride and Prejudice, Maggie is intrigued by her roommate’s teasing remarks that Austen’s characters of Mr. Darcy and Elizabeth Bennet where based on real people who lived at an estate near her family’s village in Derbyshire. They set off for a week-end to explore Montclair, the palatial estate once occupied by William Lacey and Elizabeth Garrison, the reputed Darcy doppelgangers. The estate seems to fit the description of Pemberley, the Darcy manor in Pride and Prejudice, but curious Maggie is not convinced and seeks out the assistance of locals Beth and Jack Crowell who have very close ties to the Lacey family. As the Crowell’s share their own research and documents with her, Maggie begins her own journey into the real-life parallel story of the Lacey and Garrison families and their uncanny resemblance to Austen’s characters in Pride and Prejudice.

During her research, Maggie meets handsome ex Army Air Corpsman Rob McAllister who is also working in London and she falls in love. As a bomber navigator he survived his 30 mission tour over Germany, but the scars of war, both physical and emotional have left him hollow and noncommittal. Additionally, as Maggie’s new friend’s Beth and Jack Crowell reveal their knowledge of the Pemberley/Montclair families, we learn their personal story too, and the narrative broadens into three different generations of couples becoming intertwined as we are re-introduced through a series of letters to the back story of the Pride and Prejudice characters, their connection to the Crowell family, and Maggie and Rob’s fledgling love relationship.

The story line, characters and subject are intriguing; however it is only the execution that could make this multi-layered story believable, entertaining and cohesive. While the complicated plot line would defy even a veteran author, no one can call Simonsen a coward for taking on this incredible challenge. Unfortunately, it was more than her inexperience could pull off. In the first two to three chapters, I kept waiting for the build up and hook to the real-life Pemberley mystery to throw the heroine into the investigation, but it never arrived. Without it, I felt disconnected to the story. Moreover, there was no sleuthing to discover and meet the Crowell’s, the local residents who openly reveal their years of research on the Pride and Prejudice connections to a total stranger. When they hand over 18th-century family letters for her to take home like they were an extra piece of tea cake, the historian and genealogist in me just cringed.

Some of my favorite novels in my library are war time romantic dramas and I can heartily recommend A Town Like Alice by Neville Shute or Coming Home by Rosamunde Pilcher. I was not expecting this caliber of story from a first time self published author, so I read Pemberley Remembered with on open heart. It is an interesting debut novel that would have benefitted from an experienced editor. Even though the story goes off on many tangents, it is obvious from the multiple historical references and antecedents that Simonsen did her research on Georgian and World War era English history as she includes stories about events, people and places to support her characters with aplomb. The most enjoyable aspect of her narrative was the personal stories behind the two modern couples.  The back story of the doppelgangers of Mr. Darcy and Elizabeth Bennet, William Lacey and Elizabeth Garrison was amusing, but too close to the original Pride and Prejudice plot line and characters to be respectful of Jane Austen, who in my view did not have to borrow anything from anyone to create her masterpieces.

4 thoughts on “Pemberley Remembered, by Mary Simonsen – A Review”