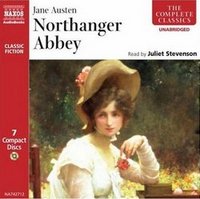 It is believed that Jane Austen wrote many of her first works for the entertainment of her family and would read them aloud for their opinions and enjoyment. It is not hard to imagine that Northanger Abbey was presented to her family in this manner. The language and phrasing lends itself so freely to the spoken word almost like a stage play, that I was quite certain that an audio book would be a great enhancement to the text. Add to that the talent of a creative narrator and you have a great combination for several hours of entertainment ahead of you.

I adore audio books and listen to them in the car during my commute to work.  It is a great time to tune out the traffic, clear my head, and get lost in a good story. When I decided that I wanted to listen to an audio version of Northanger Abbey I discovered that there were three new unabridged audio editions that had been produced in the last two years to choose from. The first Blackstone Audiobooks (2007) was read by Nadia May, the second by Tantor Media (2006) and read by Donada Peters, and the third by Naxos AudioBooks (2006) and read Juliet Stevenson. The first two readers appeared to be professional narrators specializing in the classics with a diverse range of authors, and the third Juliet Stevenson is a well known British stage and screen actress, whose performance as the acerbic Mrs. Elton in the 1996 movie adaptation of Jane Austen’s novel Emma was so hilarious, that I knew she would be an excellent choice to read the novel with the extra bit of animation that I desired.

Ms. Stevenson did not disappoint and far exceeded my expectations. She added just the right amount of irony and humor to the reading of Northanger Abbey that no one would be in doubt that it is a burlesque on the sensational Gothic fiction or other overly sentimental novels popular in Jane Austen’s day. Her choice of characterizations was imaginative and captivating. Hearing her interpretation of the emptiness of Mrs. Allen and her frivolous distinction for fashion, Isabella Thorpe and her shallow endearments, and Henry Tilney with his knack for reading and adapting to different personalities with wit and charm, I have a deeper appreciation and understanding of the novel.

I was happy to learn that Naxos AudioBooks has made quite a solid commitment to present quality productions of all of Jane Austen’s six major novels in unabridged and abridged formats. You can read about all of their recordings on their excellent web site and listen to a PodCast of an interview of Juliet Stevenson as she discusses her involvement in the audio recordings and her affinity to Jane Austen. Of note is the free download for this month of Feuille D’Album, an 1917 short story by Katherine Mansfield and read by Juliet Stevenson.

Rating: 4 out of 5 Regency Stars

Leave a comment by October 30th to qualify for the free drawing on October 31st for one unabridged, and one abridged copy of Jane Austen’s Northanger Abbey read by Juliet Stevenson, Naxos AudioBooks (2006)