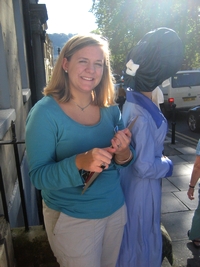 The ultimate Austen adventure continues with our featured weekly columnist, Virginia Claire Tharrington straight from the trenches of Austen central, The Jane Austen Centre in Bath, England where she is interning until December. Join her every Saturday as she shares with us her incredible adventure that every Janeite, and even Austen’s heroine Catherine Morland would envy.

This week has been another kind of quite one at the Jane Austen Centre. I have continued to give talks and work in the gift shop. The one major accomplishment of the week came yesterday when I gave my first talk without any notes. I wish I could say I decided to not take my notes up or that I had them with me and just found myself to not need them but neither are true. I had forgotten them so I was kinda forced to either give a talk or stand in front of a group of people and just stare at them. I choose to do the first as one would imagine and it went off very well. I found that my talk began to flow very easily from me and though I still struggle with a few transitions I have found it to be going much better. This week my study abroad coordinator from Meredith College was also visiting Bath because she and her husband have a house here so they came to hear my talk which I was very excited for them to hear because I wanted someone from home to know exactly what I have been up to these last six weeks. I do not think she was disappointed in the least with my talk and in fact she said that she pitied my Jane Austen teacher next semester because I would know so much.  I do feel like my knowledge of Jane Austen has grown and strengthened while I have been here. I think my knowledge of Austen has become more focused on her life and her time in Bath especially! She is a fascinating person no matter how you study her but I think by looking at her family and her letters you start to get a fuller picture of Jane. 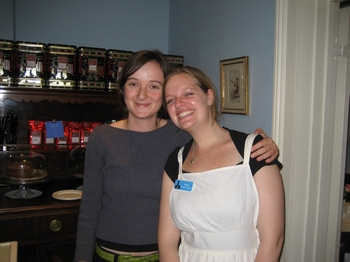 The other project that I have been doing this week was to take a survey about how people found out about the Centre and to see if they were enjoying the tea rooms. The tea rooms were getting rave reviews with an average score or about 9 or so which I thought was very good. The tea rooms are a lovely spot. Jackie, Andrew and I were up there for my interview when I first started and it was lovely. I have not worked in them as some interns have but that is probably for the best of the tea rooms. I doubt I am the best waitress and I know I am not a good tea maker unless tea bags are included. I have enjoyed being up there though for events during the festival or a hen party that I worked at (a hen party is a mix between a bridal shower and a bachelorette party depending on the bride). The fun thing about the tea rooms is that they are run by a really nice girl named Sarah and the fact they have fun things like Darcy Millionaire shortbread cake and such. I think it just makes the Centre a little more special if you take tea there as well. I have been meaning to take tea up there but I feel bad skipping out on working to go have tea upstairs and I haven’t had my friends come visit me yet but when they come I will defiantly be taking them to our lovely regency tea rooms.

Cheers till next weekend! I am off to Amsterdam and Prague this next week for break and I don’t know how much Jane Austen I will be studying except reading Mansfield Park for class but perhaps I may pick up a

couple copies of Pride and Prejudice for my collection.

Cheers until next week,

3 thoughts on “An Austen Intern Reports in From The Jane Austen Centre: Week 7”