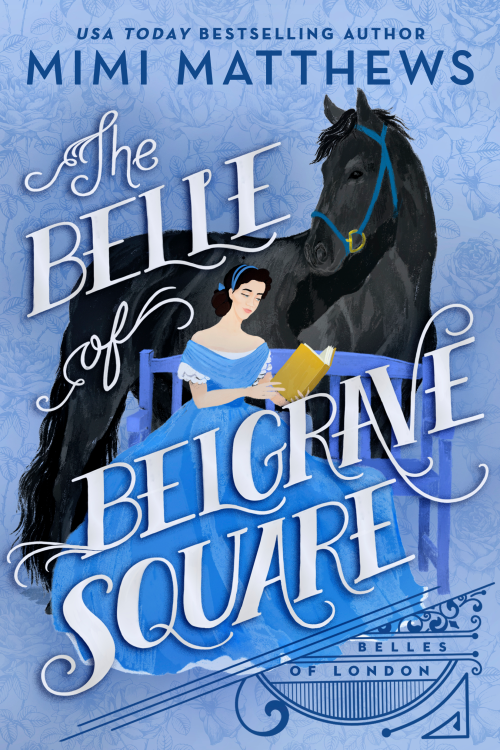 Bestselling historical romance author Mimi Matthews is joining us today for an exclusive interview regarding her forthcoming novel, The Belle of Belgrave Square. It involves a heiress who escapes her difficult family by a marriage of convenience to a questionable military hero. There are strong literary themes and nods to classics like The Blue Castle by L.M. Montgomery and the fairy tale Beauty and the Beast.

Mimi graciously agreed to share some insights with us about the story, her heroine and hero, and her future novels.

Welcome Mimi. You have a new book releasing on October 11, The Belle of Belgrave Square. It is the second novel in the Belles of London series. Can you share how all four of the novels in the series are connected?

Thanks so much for having me! My Belles of London series features four bold, unconventional young ladies who meet during the 1862 London season. Each is a gifted equestrienne, more comfortable in the saddle than in a ballroom. The strength of their friendship—both with each other and with their horses—is what ties the novels together.

I was delighted by your heroine, Julia Wychwood. She loves to ride her horse and eat bonbons in bed while reading novels. What were your greatest challenges in writing her story?

I’m so glad you enjoyed Julia! One of the challenges in writing her journey was allowing her the room to gain confidence in a natural and believable way, while still maintaining the pacing of the story. She’s a shy, socially anxious young lady. I didn’t want her decision to fight for her future to come out of nowhere.

Your hero, Captain Jasper Blunt, is not immediately appealing to the reader, in fact, he is rather gloomy and disreputable. What was your inspiration for his personality and storyline?

I love a hero with a gruff, grumpy exterior. I’m also deeply attracted to characters that aren’t what they seem at first meeting them. People with murky pasts and seemingly sinister histories—whether true or only rumor—are a never-ending source of fascination for me, both as a reader and as a writer.

Your heroine, Julia, must make critical, unconventional choices to find her own happiness. What was life like for a young woman of Julia’s social standing in Victorian England?

It could be quite stifling, especially for a young lady of Julia’s temperament. A lot was expected of fashionable young ladies, both during the London season and outside of it. Not everyone was up to that level of pressure and scrutiny.

You are famous for impeccable historical research. Many of your romance novels are set during Victorian era. What intrigues you about this time in English history?

There was so much change going on in the Victorian era. So much invention and innovation. That change was juxtaposed by incredibly restrictive social rules. I like the tension that creates in a story.

I always enjoy the swoon worthy romance that you create in your stories. How do you get inside the head of your characters to create such endearing personalities and compelling plot lines?

For me, a lot of it involves having empathy for my characters. Most of what they’re going through, I’ve gone through myself—at least, on an emotional level.

What is up next for you in your writing career?

So many exciting things! I’m finishing up my Belles of London series, with The Lily of Ludgate Hill (Book 3) coming in January 2024 and The Muse of Maiden Lane (Book 4) out later that autumn. After that, I’m starting a wonderful new series for Berkley/Penguin Random House called the Crinoline Academy. I’ve been describing it as Great Expectations meets the Umbrella Academy, with a dash of Victorian-era Charlie’s Angels. The first book is scheduled for early 2025.

I’m also working on a sequel to my Regency novels The Work of Art and Gentleman Jim. Called Return to Satterthwaite Court, it’s set in 1843 and features the children from the two earlier stories. It will be out in April 2023. A second novel in this series is currently slated for June 2023.

USA Today bestselling author Mimi Matthews writes both historical nonfiction and award-winning proper Victorian romances. Her novels have received starred reviews in Publishers Weekly, Library Journal, Booklist, and Kirkus, and her articles have been featured on the Victorian Web, the Journal of Victorian Culture, and in syndication at BUST Magazine. In her other life, Mimi is an attorney. She resides in California with her family, which includes a retired Andalusian dressage horse, a Sheltie, and two Siamese cats.

A BookBub Best Romance of 2022

A London heiress rides out to the wilds of the English countryside to honor a marriage of convenience with a mysterious and reclusive stranger.

Tall, dark, and dour, the notorious Captain Jasper Blunt was once hailed a military hero, but tales abound of his bastard children and his haunted estate in Yorkshire. What he requires now is a rich wife to ornament his isolated ruin, and he has his sights set on the enchanting Julia Wychwood.

For Julia, an incurable romantic cursed with a crippling social anxiety, navigating a London ballroom is absolute torture. The only time Julia feels any degree of confidence is when she’s on her horse. Unfortunately, a young lady can’t spend the whole of her life in the saddle, so Julia makes an impetuous decision to take her future by the reins—she proposes to Captain Blunt.

In exchange for her dowry and her hand, Jasper must promise to grant her freedom to do as she pleases. To ride—and to read—as much as she likes without masculine interference. He readily agrees to her conditions, with one provision of his own: Julia is forbidden from going into the tower rooms of his estate and snooping around his affairs. But the more she learns of the beastly former hero, the more intrigued she becomes…

Enter a chance to win a complete set of paperback copies or digital copies of all 13 of Mimi Matthews’ published novels plus a $25.00 Amazon gift card! Open internationally until October 11, 2022. Giveaway details available at Mimi’s blog.

30 thoughts on “An Exclusive Interview with Mimi Matthews, Author of The Belle of Belgrave Square + Giveaway”