Happy Friday, dear readers! In anticipation of the paperback release of one of my favorite novels of 2020, I have re-read The Jane Austen Society, by Natalie Jenner. Like Austen’s novels, I have picked up on new insights into the characters and themes and see the story in a new light. I highly recommend a re-read and envy those who will be discovering the story for the first time.

The paperback edition released this week on July 6th and it is packed with exciting extras:

For those unfamiliar with the novel here is a description from the publisher and a link to our review.

END_OF_DOCUMENT_TOKEN_TO_BE_REPLACED

Hello gentle readers. Summer is in full swing here at Woodston Cottage. My hydrangeas, anemones, and roses are blooming. We had a heatwave over the weekend that sent this hot weather wimp inside and under a fan!

Today I am so happy to welcome bestselling author Rachel McMillian to Austenprose for an exclusive interview in celebration of her latest historical fiction novel, The London Restoration, which just released this week.

Rachel is a multitalented writer who is happiest when she is lost in history researching her latest novel. She has written two historical mystery series: the Herringford and Watts mysteries set in 1910 in Toronto, Canada, and A Van Buren and DeLuca mysteries set in 1937, Boston, USA. Recently, she has branched out into nonfiction too with Dream, Plan, and Go: A Travel Guide to Inspire Your Independent Adventure (2020), and her END_OF_DOCUMENT_TOKEN_TO_BE_REPLACED

My regular readers and friends will remember how much I admire and enjoy reading the Queen of Regency Romance, Georgette Heyer. We reviewed all her historical novels during a month-long celebration here on Austenprose in 2011.

While I continue to work through the long list of her books, there are scholars who have read them all and studied her life and work. The first among them is Dr. Jennifer Kloester. Austenprose reviewed her Georgette Heyer: A Biography of a Bestseller when it released in 2011 and have followed her career ever since. I was delighted when she agreed to an exclusive interview. Her extensive knowledge of Heyer and her own talent and brilliance are dazzling.

Please join me in welcoming Dr. Kloester to Austenprose today. Additional questions by readers are welcome, so please have your share of the conversation!

What was the first Georgette Heyer book that you read, and what were your first impressions?

The first Heyer novel I ever saw was Cotillion but the first one I ever read was These Old Shades. I loved it! I’d never read anything like it and it only made me long for more. Luckily the tiny YWCA library in the remote mining town where I was living in Papua New Guinea had a wealth of Heyer novels and I soon became immersed in her world. I remember being carried away by the story and characters and the language–– oh, it was wonderful, so alive and fresh and co completely convincing. Even when I didn’t understand a particular word, Heyer’s skill always meant I got the gist of the meaning. Her characters lived for me then and they live for me now.

Why were you inspired to write a biography of her life? END_OF_DOCUMENT_TOKEN_TO_BE_REPLACED 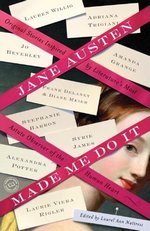 I was thrilled to be interviewed for the What’s Old Is New podcast by Nicole of Linus’ Blanket blog and Jen of Devourer of Books blog. It was such fun chatting with two fellow book bloggers and Janeites!

You can read more about my experience on the Jane Austen Made Me Do It blog and listen to the podcast for free by following this link. (Curious of your impression! Does my voice sound like what you expected?)

Please welcome Austenesque author Mary Lydon Simonsen on the first stop on her official blog tour today for her new Pride and Prejudice variation, The Perfect Bride for Mr. Darcy. This new novel released on New Year’s Day and my review was posted yesterday. After reading it, I was curious about Mary’s inspiration and choices that she made in expanding characters and changes to the original Austen storyline. She offers this blog in celebration of her book’s release, elaborating on her creative choices and insights that readers will find quite helpful.

Thank you, Laurel Ann, for inviting me to join you today to talk about my new book. As a long-time reader of your blog, I consider it to be an honor.

The Perfect Bride for Mr. Darcy begins shortly after Darcy’s awful proposal to Elizabeth at Hunsford Lodge.  After parsing Darcy’s letter, Lizzy begins to have second thoughts about rejecting so worthy a suitor. As for Darcy, he quickly realizes that such a self-righteous, unfeeling response to Lizzy’s refusal probably closes the door to any renewal of his attentions. Between the letter and Lizzy’s harsh words, both parties leave Kent feeling that they will never come together. So that’s that. Right?

Fortunately, for our favorite couple, there are those who disagree. First, Anne De Bourgh, after realizing that Elizabeth is perfect for her cousin, sets a plan in motion to bring the two together at Pemberley. Along the way, she enlists the aid of an eager Georgiana Darcy.

When I first read Pride and Prejudice many years ago, I was about the age of Georgiana, and although I would have preferred to be more like the spunky Elizabeth Bennet, I was quiet and shy like Darcy’s sixteen-year-old sister. Because of that, I wanted to know more about her. I also thought that Anne de Bourgh got the short end of Austen’s pen. After all, she had to live with Lady Catherine and had to accept the fact that her mother had decided that she was destined to marry Mr. Darcy without having any say in the matter. Wasn’t that punishment enough? Little did I know that more than three decades later I would have an opportunity to stage an intervention with these characters. END_OF_DOCUMENT_TOKEN_TO_BE_REPLACED

Lauren Willig, one of my favorite historical romance novelists has just released The Mischief of the Mistletoe, her seventh novel in The Pink Carnation series. Set in Regency-era Bath she has elevated Reginald “Turnip” Fitzhugh, one of her very popular comedic characters from the series, and given him his own spy adventure and a romance. One of the supporting characters is our very own Jane Austen and the storyline parallels her unfinished novel The Watsons. It is rollicking great romantic adventure and I recommend The Mischief of the Mistletoe highly.

Please join me in welcoming Lauren Willig today to chat with us about her new novel and its Jane Austen connections.

LAN: Welcome Lauren. Many of your male characters in the Pink Carnation series are iconic romantic heroes, rivaling Jane Austen’s Mr. Darcy or Captain Wentworth in honor, bravery and integrity. Only one is a lovable bumbler – Reginald “Turnip” Fitzhugh. He is endearingly flawed, and because I dearly love to laugh, one of my favorite characters. Turnip is a very unusual name. Can you share his back-story and why you decided to spotlight this un-conventional hero in The Mischief of the Mistletoe?

LJW:  I hadn’t intended to write a book about Turnip.  I threw him in there purely for comic relief.  Ever notice how any group of guys seems to contain the one slightly clueless friend who acts as a foil for the rest of them?  (Extra points if that guy is named Bertie, Bunty or Gussy Finknottle.)  Turnip was that guy.  But as the series continued, emails started pouring in, asking when Turnip was going to get some lovin’.  And I began to wonder if there might not be more to my lovable vegetable than I had previously imagined.

There was a school of thought that posited that Turnip was another Percy Blakeney, hiding a cunning intelligence beneath a foppish façade.  I didn’t want to go that route, partly because Baroness Orczy already had, and partly because it seemed too easy.  I wanted to make Turnip heroic despite his lack of endowment in the brainbox.  The more I explored Turnip’s character the clearer it became that he really did have one thing going for him, hidden beneath those gaudy waistcoats: an enormous heart.

Side note: several people have asked me how Turnip came to be called Turnip.  As followers of the series know, his real name is Reginald and his doting (ahem) sister calls him “Reggie”.  At least, she does when she wants something from him.  When I wrote the early books in the series, I was on the tail end of a massive Blackadder obsession.  As anyone who has watched Blackadder knows, just as sheep are inherently amusing animals, turnips are inherently amusing vegetables.  When I wanted a silly name for a character, what better than the sheep of the vegetable kingdom? END_OF_DOCUMENT_TOKEN_TO_BE_REPLACED