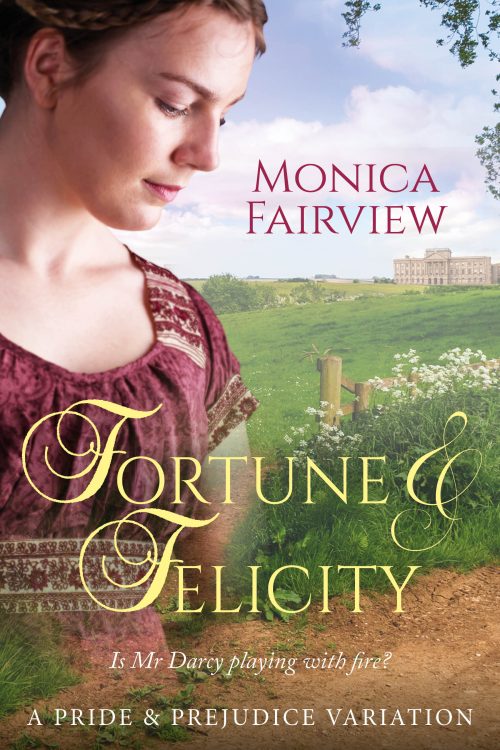 Hunsford Parsonage is a popular jumping-off spot for Pride and Prejudice variations. This is when Mr. Darcy makes his ill-phrased marriage proposal to Elizabeth Bennet, is soundly refused, and presents her with a letter the following morning to defend himself against her accusations. It’s the seminal event of the book, making it an ideal spot to imagine “what if” things had happened differently there. That is where we begin in Monica Fairview’s newest variation, Fortune & Felicity.

The Prologue shows an agonized Darcy struggling to write that important missive. When he accidentally spills ink over the finished letter, he decides it must be fate intervening. Consequently, he consigns his night’s work to the fire, leaving Elizabeth ignorant of its contents.

The surprise here is that, unlike most variations, the book then skips ahead seven whole years. During that time, the Bennet family fared poorly. Lydia did run away with Mr. Wickham who, predictably, abandoned her. Mr. Bennet paid dearly to marry her off. He subsequently died, resulting in Mrs. Bennet’s removal from Longbourn to a simple cottage provided by her brother Mr. Gardiner. Jane is married, but not to Mr. Bingley. Her husband, Mr. Grant, is a tradesman whose business is struggling, and they have four children with another on the way. Elizabeth lives with them, having married Thomas Heriot, a naval officer who died at sea three years ago and left her a penniless widow.

Darcy bowed to Lady Catherine’s wishes immediately after that terrible night seven years ago and married Anne de Bourgh. “He had done it in a moment of anger against the world, a moment of supreme indifference to his own fate.” It was not a happy marriage for many reasons.

Anne recently died, and their five-year-old daughter Kathy is a difficult child, “well on her way to becoming a Lady Catherine.” Not only is she willful and spoiled, but she emphatically tells Darcy that she hated her mother. Although Anne had loved her daughter, she was too sickly and fretful to be much of a mother.

Rather than continue being a financial burden to her family, Elizabeth seeks work as a governess. Mr. Darcy is the only potential employer to show any interest, forcing her to swallow her pride and be interviewed for the position. After so many years, Darcy has gotten over his desire for her, but he’s startled by her appearance when he first sees her. “Before him, he saw a serious woman looking for a position, weighed down by circumstances, dressed in a matron’s mob cap and plain dress. She was perfectly ordinary. Miss Elizabeth Bennet was gone. It was Mrs. Elizabeth Heriot that sat before him, a woman whose experiences he knew nothing about.  She was a stranger.”

Hoping she retains enough of her old warmth and liveliness to handle his obstinate daughter, Darcy engages Mrs. Heriot to be Kathy’s governess. Soon Elizabeth is on her way to Pemberley to meet her new charge.

Kathy proves to be a tough nut to crack. Although Elizabeth is quite capable after caring for Jane’s rowdy brood and, on occasion, the Gardiner children, Kathy rudely rejects Elizabeth’s attempts to engage her. Fortunately, Georgiana comes to visit with her husband and their two little boys, and Kathy becomes more cooperative when sharing lessons with her younger cousins.

Ms. Fairview does a wonderful job of conveying Elizabeth’s situation more realistically than is usually found in Jane Austen fan fiction. As a governess, she must wear gowns that are simple (she must dress herself without assistance), dark-colored, unadorned, and made of drab fabrics. Most of the servants are unfriendly, and Elizabeth must use the servants’ stairways, corridors, and passageways. When the household is particularly busy and Elizabeth offers to help, Mrs. Reynolds admonishes her—Elizabeth’s duties are strictly in the classroom. Then there’s Kathy herself, who continues to be a challenge.

The chemistry between Darcy and Elizabeth is developed extremely well. By leaping ahead those seven difficult years, Ms. Fairview gives us more mature, more emotionally scarred versions of these beloved characters. Darcy confuses matters from the start by directing Mrs. Reynolds to treat her “like a gentlewoman,” not recognizing how this could be perceived by others. The point of view switches back and forth, showing Elizabeth struggling to find her place in the household, Darcy slowly becoming more obsessed with her, and both fighting their growing attraction to each other. Things come to a head at a marvelous Cinderella-like ball that leads to a disastrous aftermath.

Generally, the plot is beautifully executed with well-drawn characters. It’s fun to read a Jane who’s so emotionally charged thanks to her current pregnancy. I do note that part of her story arc is left dangling. We’re told she almost died giving birth to her last child and her doctor advised her against having another, but she’s pregnant again. We never learn what happens to her. Caroline Bingley turns up, still unmarried, still after Darcy, and still full of underhanded mischief. Georgiana has grown into a confident, mature woman, and I particularly enjoy the characterization of Lord Barrington (“Barry”), her insightful husband.

Overall, I found Fortune & Felicity to be the perfect mixture of humor, romance, realism, fairy tale, and, naturally, Pride and Prejudice.

We received a review copy from the publisher in exchange for an honest review. Austenprose is an Amazon affiliate. Cover image courtesy of White Soup Press © 2020; text Debbie Brown © 2020, austenprose.com.

28 thoughts on “Fortune & Felicity: A Pride and Prejudice Variation, by Monica Fairview — A Review”