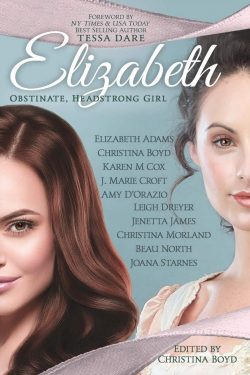 The Jane Austen Fan Fiction (JAFF) world has been exploding with stories about Elizabeth Bennet for a long time now. What can possibly be left to explore about this beloved Pride and Prejudice character and her Mr. Darcy? Ten talented storytellers prove they can always find new ground to cover in the character-driven anthology, Elizabeth: Obstinate, Headstrong Girl.

One of these storytellers is the anthology’s editor, Christina Boyd, who took on two roles by including her own contribution here. Well-known historical romance author Tessa Dare provided the foreword. In it, she eloquently explains her lifelong admiration for the fictional Elizabeth Bennet.

As the book’s title suggests, Elizabeth’s obstinacy and stubbornness are highlighted; however, her intelligence, humor, and willingness to admit when she’s wrong are apparent throughout, too. Another recurring topic is Elizabeth as a young woman struggling to fight male dominance in society. Naturally, other Pride and Prejudice characters have important roles, most particularly Mr. Darcy himself. All the ten stories are told from Elizabeth’s point of view, though not necessarily in first person. The snippets below give a small taste of the delicious contents.

Starting with the modern era and making our way back to traditional Regency settings, we begin with Leigh Dreyer’s contribution, “The Last Blind Date.” Charlotte to Elizabeth: “You convince yourself at the start of any relationship that the guy is an idiot, treat him like he’s an idiot the whole time, and refuse to even consider a second date.”

For Karen Cox’s story, “Resistive Currents,” it’s 1980. Darcy’s thoughts regarding Elizabeth, a WOMAN majoring in electrical engineering: “An ECE education seems like a pretty difficult route to take in order to get an MRS Degree or to please a daddy who wanted a son.”

Continuing back in time to 1934, Beau North’s “Love in Limelight” takes us to Hollywood. “William Darcy was an insufferable prig and an unrelenting thorn in my side. Since signing my contract for The Headstrong Girl, I’d made it my business to repay him in kind.”

“The House Party” by Jenetta James happens in 1913 when British suffragettes are demanding the right to vote. Elizabeth’s thoughts regarding Darcy: “She upbraided herself for her interest in the man and resolved to end it. For why she should concern herself with such a pre-historic creature as could not support the obvious way in which the world must go?”

Several authors remain in Jane Austen’s Regency era, including Christina Morland with her “Atmospheric Disturbances.” Elizabeth, speaking to Darcy during their betrothal, says, “ ‘If you supposed from our previous encounters’—she tugged free of his hold—‘that my impertinence was a mere ploy to attract difficult men’—then crossed her arms—‘allow me to disabuse you of this notion!’ ”

In “The Age of Nescience,” J. Marie Croft describes experiences over the years that influenced Elizabeth, starting when she was ten years old. Elizabeth herself observes, “As much as I admire Papa’s sarcasm, his amusement in others’ faults is, in itself, a fault. I am, I think, an odd mixture of my parents—offspring of Papa’s aloof cynicism and Mama’s injudicious volubility.”

According to Joana Starnes in “The Uncommonly Busy Lane to Longbourn,” the day following the Netherfield ball is quite an enlightening one for Elizabeth. Darcy to Elizabeth: “Has anyone told you that you can be awfully headstrong?” Elizabeth’s response: “No. To my good fortune, most of those in my circle are well-mannered.”

It’s three years after Mr. Bingley returned to Hertfordshire WITHOUT Darcy in Amy D’Orazio’s “Resolution.” “What I wanted to do was grab him by the cravat and demand some answers. Why had he not returned? Was there someone else he loved? Was it Lydia’s affair which drove him from me?”

“Something Like Regret” by Elizabeth Adams starts when Elizabeth is touring Pemberley. “I had claimed [the title] Cleverest Bennet Sister as my own years ago and I was loath to relinquish it.”

Fittingly, Christina Boyd’s story gets in the final word. “A Mate for Life” imagines an older Elizabeth, who advises her granddaughter Adelaide, “You must know that this man, who you will betroth all that you are and all you own, is someone you can honor and respect.”

While the anthology is filled with gems, the two Christinas—Morland and Boyd—penned my favorites. Beyond having wonderful plots, they offer substantive truths about entering a marriage. Learning how to work through arguments, however uncomfortable, is necessary for a healthy relationship. And, at my age, I can relate to a grandmotherly Elizabeth Darcy whose sage advice is based on having enjoyed a lifetime of marital love. Elizabeth Adams’s story is the only one that misses the sweet spot for me. Her writing is lovely and it’s likely that the angst-less, romance-filled plot will appeal to many readers, but I feel it lacks both dramatic tension and a turning point.

The writing sparkles throughout the entire book. It elicits chuckles and tears, head shakes and nods, groans and cheers, and maybe a few swoons at the romantic bits. These short stories, as diverse as they are remarkable, confirm that, yes indeed, there are plenty of new stories to tell about Elizabeth Bennet.