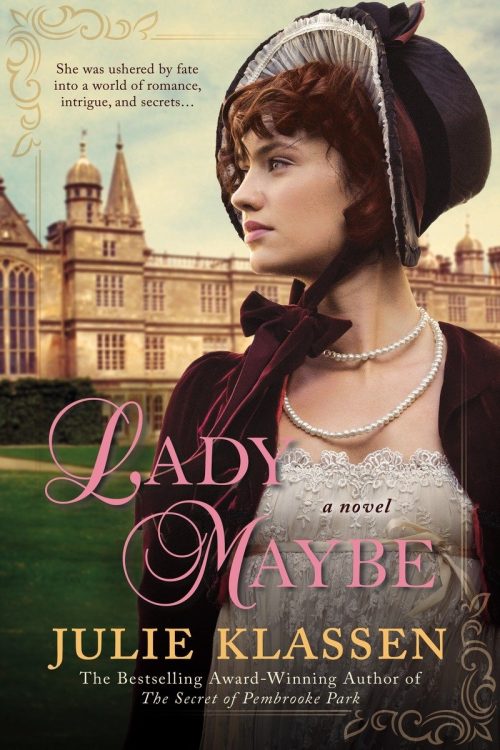 For the past several years, Austenprose has had the joy of reviewing books inspired by a beloved author, Jane Austen, as well as those set in the Regency period. One author, in particular, has appeared more than once and has written numerous Regency books inspired by the timeless novels of Jane Austen and the Bronte sisters: Julie Klassen. In her latest novel Lady Maybe, Klassen blends notes of Charlotte Bronte’s Jane Eyre and Daphne du Maurier’s Rebecca, to create a mystery-filled Gothic romance about the power of truth, and the lengths people will go to conceal it.

Lady Marianna Mayfield: Pressured into a marriage to Sir John Mayfield by her money-obsessed father, Lady Marianna ignores her older husband to instead focus on her many flirts, especially her lover, Anthony Fontaine. When her husband suddenly decides to take her with him to a house far away from Bath, she obeys—her silent companion and husband beside her, and the surety that her lover will do anything to find her.

Sir John Mayfield: Plagued by the knowledge that he’s married to a woman he loves but who ignores him and cheats on him openly, Sir John eases his pain by fencing and confiding in his wife’s companion. After months of an unhappy marriage, Sir John comes up with a plan—if he can quickly remove his wife from Bath and the arms of her lover, they can overlook the secrets that are eroding their marriage, and for the first time, be truly happy together.

Hannah Rogers: Ex-companion to Lady Marianna Mayfield who vanished from the Mayfield residence months ago. On her sudden return asking for the last of her pay, Lady Marianna convinces her to be her only friend on the journey to Devonshire. While strangely reluctant to leave and uncomfortable in the Mayfield’s company, Hannah accepts, vowing to return for someone hidden behind.

James Lowden: When Sir John’s new solicitor arrives at the doorstep of Clifton House, the Mayfield’s new residence, he enters with his own ideas of the characters of those who live inside. His goal: To uncover the truth amidst the lies. But that task is much harder than he ever imagined….

After a horrible accident, one heroine wakes up with no memory of who she is, and the view of her friend floating away in the ocean. After realizing who she is while recovering at Clifton House, she enters into a world of confusion and lies, because what—who—is at stake is worth more than the truth. Or so she thinks. When James Lowden arrives at the doorstep asking invasive questions about her past actions, can she manage to escape the woman she’s become to save the most important person in her life? And when Sir John Mayfield wakes up from his coma, will he help her, or finally release her to the consequences of all of her mistakes?

Like Julie Klassen’s previous Regency novels, Lady Maybe is filled with exciting mysteries and surprising revelations, even until the final pages. It’s always a fun experience as a reader to be completely shocked and continually surprised by what the characters have done in the past or are doing within the book’s pages, and yet again, Klassen skillfully weaves together all the mysteries for an interesting and complex story.

One aspect of the complexity of Lady Maybe that I did not enjoy, however, was the tangled web woven by the heroines and heroes. One heroine spent most of the novel claiming innocence while really making the worst choices of them all, another was constantly accused of wrongdoing (yet, for me at least, sympathetically and realistically human), a hero who was like beginning-of-Pride-and-Prejudice Mr. Darcy on steroids, and another like brooding Mr. Rochester. Really, it felt like most of the novel was a story of two villains and two villainesses, rather than two heroes and two heroines. The sometimes clichéd characters (and overly dramatic dialogue), as well as their selfish motives and lack of self-awareness, were alternatively disappointing and frustrating to me.

All that being said, something Lady Maybe shows masterfully is what life is like when trapped by the problems and consequences of harmful decisions and actions. This novel also shows that human emotions are not always clear-cut (a topic also covered in Jane Austen’s Mansfield Park), and that ultimately, everyone has the chance of redemption. While I believe Klassen’s previous novels are stronger in characterization, plot, and message, Lady Maybe has its own redeeming qualities that many readers will find worth the read.

We received a review copy from the publisher in exchange for an honest review. Austenprose is an Amazon affiliate. Cover image courtesy of Berkley Trade © 2015; text Katie Patchell © 2015, austenprose.com

2 thoughts on “Lady Maybe: A Novel, by Julie Klassen – A Review”