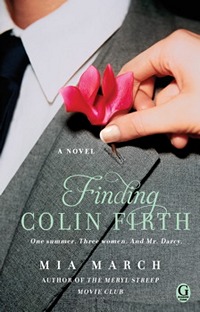 What Janeite would not stop dead in her tracks when she spies “Colin Firth” in the title of a book? Mia March’s latest offering Finding Colin Firth: A Novel certainly set off all my bells and whistles. The smolderingly sexy British actor not only won our hearts when he emerged dripping wet from Pemberley pond as Mr. Darcy in the 1995 adaptation of Pride and Prejudice, but he also has an acclaimed career, winning the best actor Academy Award in 2011 for The King’s Speech. Who wouldn’t want to find Colin Firth? But no, dear friends, this is not a “How to” book sharing tips and advice on how to track and successfully have a Firth encounter. Eeesh! It’s a work of fiction about three women unknowingly bound together and whose lives intersect when the actor is slated to film a movie in a coastal Maine town. Daily rumors of Mr. Firth’s arrival fuels fantasy and stirs the excitement in their lives and aspirations. (Just imagining spotting Mr. Firth in my little town sets this fan-girl’s heart racing!)

A year after her mother’s death, (who incidentally was a Colin Firth fan), 22-year-old Bea Crane receives a mysterious letter from her deceased mother, confessing she adopted Bea as a newborn. “…Now that I feel myself going, I can’t bear to take this with me. But I can’t bear to tell you with my final breaths, either, I can’t do that to you. So I’ll wait on this, for both of us. But you should know the truth because it is the truth.” Shocked, Bea tracks down her birth mother to Boothbay Harbor, Maine and decides she must see this unknown woman for herself.

In Boothbay, Bea learns that 38-year-old Veronica Russo is an unmarried waitress-slash-magic pie baker-slash-Colin Firth fan who has only in the last year returned to her hometown. After years of failed relationships, her friends worry she will end up alone.  “…she’d started saying what felt light-hearted but true at the same time, that she was holding out for a man who felt like Colin Firth to her. Her friend Shelley from the diner had known exactly what she meant. ‘I realize he’s an actor playing roles, but I get it,’ Shelley had said. ‘Honest. Full of integrity. Conviction. Brimming with intelligence.  Loyal. You just want to believe everything he says with that British accent of his –and can trust it.’” Having failed to escape haunting memories of her youth, Veronica has come home to confront her past then “maybe her heart would start working the way it was supposed to. And maybe, maybe, maybe, the daughter she’d given up for adoption would contact her.” Now back to those magic pies by Veronica… She calls them elixir pies claiming to cast hope, love or banishment– or anything that conjures up a solution to one’s troubles. “For a heartbroken friend, Healing Pie. For a sick friend, Feel Better Pie. For a down-in –the dumps friend, Happiness Pie. For the lovelorn, Amore Pie.” And they seem to work! On everyone except Veronica. At least so far.

After seeing her birth mother at the diner, but not brave enough yet to approach her, Bea decides to take a tour of Hope Home, a home for unwed pregnant girls where she was born. There she meets a Manhattan journalist, Gemma Hendricks. Upon first coming to town, the recently fired Gemma thought she could curry favor with her old magazine by scooping a coveted human-interest story on Colin Firth. Instead, she is offered a freelance gig at the local newspaper to write a story on the 50th anniversary of Hope Home.  At a crossroads herself, Gemma has only just discovered she is pregnant but has yet to share the news with her devoted attorney husband. She loves living and working in the city but already knows her husband wants to move to the suburbs and start a family.  “How would she ever get back what she had at ‘New York Weekly’? Alexander would realize this in a hot minute and argue her into that Dobbs Ferry house before she new it.  He’d make his own case until she had no arguments of her own. And once she had the baby? He’d bombard her with articles about working mothers and bad nannies and reckless day cares.”

Although this is an intricate concoction, cooking up a potentially emotionally heated story, it would be a failing indeed were I not to mention the elephant in the room. A glaring error, in fact. And I mean GLARING—Red-light GLARING error—in the beginning of the book. Veronica is baking a pie while supposedly watching the mini-series Pride and Prejudice. The Colin Firth, 1995, A&E five-hour version. March writes, “Fitzwilliam Darcy’s face filled the TV screen. ‘If, however, your feelings have changed, I will have to tell you; you have bewitched me, body and soul, and I love, I love, I love you. I never wish to be parted from you from this day on…’” Although it’s not Austen’s prose, this Janeite loves that line and all its saccharine-sweet sentiment. I know for a fact it’s what the Matthew Macfadyen’s Mr. Darcy from the Joe Wright 2005 version of P&P says to Kiera Knightley’s Lizzy Bennet as they meet in a mist-covered field at daybreak!  So, I went back and made sure I hadn’t missed something—something like Veronica was watching the newer version. But no, she is supposed to be watching the Colin Firth version. Ugh! It is incredulous any author writing about the namesake of her book, or her editor, or the layers of people who read it before publication could let such an obvious blunder slip through unnoticed. From then on I had my doubts March was a fan of Colin Firth or P&P – and speculated maybe she wrote this bit of pastiche to take advantage of the current popularity and ready-made fan base of both. Prejudiced thereafter, I read any mention of Mr.Firth or his movies with a cynical eye, thinking this could be any popular actor and his movies dubbed in. Nevertheless, I soldiered on because honestly, I liked the premise—and was hopeful.

Did I enjoy the book? Hmmmmm… Yes, I did. It was an interesting story with strong plot lines. Although Finding Colin Firth: A Novel dealt with powerful issues regarding teenage pregnancy, adoption, marriage, and relationship struggles with a happy ending for all, I must admit I never felt overly invested in any of the characters to really like them. There seemed no shortage of disjointed “telling” from the three main characters’ point of view but scant, soulful interaction. Given the themes, I thought there would have been more depth. Pity. In short, it’s a good book. Easy, breezy bit of chic-lit that I liked. Not loved.

Yes, there is a Colin Firth sighting, eventually, but then again, he’s not really the story. Just the bait.

12 thoughts on “Finding Colin Firth: A Novel, by Mia March – A Review”