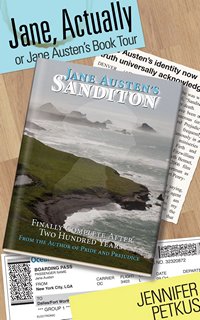 From the desk of Jeffrey Ward:

What would YOU say to Jane Austen if it became possible to communicate with her personally after two centuries? Jennifer Petkus’ third novel, Jane, Actually explores that possibility with an endless array of “what-if’s:” Is there an afterlife? If so, in what form? If departed souls are immortal, will the living be able to communicate with them? Will one departed soul be able to contact another departed soul? How will departed souls legally verify their identities? Can a disembodied soul fall in love with another disembodied soul?

A little background is necessary. In her debut novel, Good Cop Dead Cop, the author establishes a discovery that enables departed souls to contact the living via a technological marvel known as the “afternet.” In her second novel My Particular Friend, Petkus mashes together Sherlock Holmes with Jane Austen’s Bath for a Regency romp that is impossible to pin a label on. With great warmth and humor, the author ingeniously mashes together the “afternet” with the very-alive but the disembodied soul of Jane Austen and you actually get Jane, Actually.

Jane’s identity has been legally verified by the afternet authentication committee and she has finished her incomplete novel Sanditon, she has acquired an agent and staunch promoter in Melody Kramer and a grand book tour is planned. Although Jane communicates easily over the afternet, she is invisible, so the search begins for a suitable avatar to be her visual embodiment. A young acting student coincidently named Mary Crawford is one of the finalists. She knows next to nothing about Jane Austen, not even the literary significance of her own name. However, Jane takes a liking to her and she is chosen over more qualified candidates. Getting Jane and Mary to “sync-up” using the afternet proves difficult and frustrating but they warm to each other nevertheless.

Everything appears to be progressing smoothly but there is trouble afoot for Jane in the person of Dr. Alice Davis, one of the world’s most foremost subject matter experts on Jane Austen. One of her English counterparts, fellow expert and journalist Courtney Blake, has discovered a never-before-seen letter that Sotheby’s London auction house has verified as written in Jane’s hand. Dr. Davis plans to spring this revelation on Miss Austen at the Jane Austen Society of North America (JASNA) general meeting and prove this Jane Austen is a fraud if she is unable to define her own letter’s contents.

Her unlikely and unwitting accomplice is Stephen Abrams a doctoral candidate whom she advises. Stephen meets Jane’s avatar Mary and the beginnings of a romance ensue. Mary is utterly devoted to Jane but poor Stephen is unaware to what extent Dr. Davis plan is to discredit Jane’s identity.

Jane also has been communicating with an Albert Ridings for a decade via the afternet. Albert died during World War I and was from the same general region as Jane in Hampshire, England.  She has disguised her identity this entire time, not wishing him to get caught up in her celebrity.  Their relationship appears to have progressed to intimate fondness and even love for each other but her lack of forthrightness may jeopardize his trust and faith in her.

The author’s depiction of Jane Austen is chillingly authentic. She is intelligent and savvy, having eavesdropped on practically every development in the two centuries since her death. As this reviewer suspected, Jane is kind and loyal but does not suffer fools as she turns on those who wish to manipulate her with caustic wit. She shows mastery in most things except perhaps her own confused feelings about love. A precarious romantic moment is in the air for both couples as the invisible follow the visible through a country dance at the JASNA meeting:

“It was time for Stephen and Mary to progress through the line and Albert and Jane effortlessly followed them.‘But love requires hands to hold and lips to kiss,’ Jane said.  ‘Let me not to the marriage of true minds admit impediments as the man said.’ Albert said in response.” (A quote from Darcy in P & P)

As it was all but impossible to categorize My Particular Friend, Jane, Actually: or Jane Austen’s Book Tour defies literary labels as well! It is part science fiction, part fantasy/paranormal, part romance, part mystery/suspense, and ALL Jane Austen.  Is it absurdly fantastic? Yes!  Is it compellingly entertaining? Double-yes!!

The author’s love for Jane Austen pours forth from her impressive research and footnotes. And, before you lose yourselves in Jane, Actually, be sure to read the introductory explanation on the complexities of the afternet v-e-r-y carefully. One wonders what Jennifer Petkus will come up with next when she comes back to earth. Her creative imagination, character development, and gifted writing skills apparently know no boundaries.