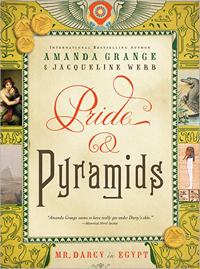 Please join us today in welcoming authors Amanda Grange and Jacqueline Webb on their blog tour of Pride and Pyramids, a new Austenesque sequel to Pride and Prejudice that takes Elizabeth, Darcy and their family to Egypt. Leave a comment to enter a chance to win one of three copies of the book available.

Amanda: I’d long wanted to write a sequel to Pride and Prejudice, but there were already a lot of sequels available and I didn’t want to repeat the usual story of Elizabeth and Darcy settling down at Pemberley. I didn’t want to write about the Darcys having marital problems either, since I firmly believe they live happily ever after, but a book needs incident in order to make it interesting, which created a dilemma. Then one day I was emailing Jackie, whose first book was set in Egypt, and something clicked, because it reminded me that Egyptology was a huge craze in the Regency era. The wealthy young men of the eighteenth century often extended their Grand Tour of Europe to include Greece, Turkey and Egypt, and interest was heightened in 1799 – when Jane Austen was writing Pride and Prejudice – because of the discovery of the Rosetta Stone. The Stone was brought to England and it was displayed in the British Museum from 1802 onwards. Interest continued to grow and Belzoni’s account of his adventures in Egypt, in 1815, (which was very useful for our research!) added more fuel to the fire. So it seemed a perfect setting for a sequel which would be new and fresh, but at the same time accurate for the period. I was very excited by the idea and suggested we write it together because Jackie had researched Egypt intensively for her previous book and had all the relevant research books at her fingertips.

Jacqueline: When Amanda suggested we collaborate on a Jane Austen sequel I was delighted. My first book The Scarlet Queen is based in Egypt about a young woman searching for an elusive cache of treasure in the Valley of the Kings, so I had already done a lot of research around this topic. My novel was set in the Edwardian era, about a hundred after Pride and Prejudice, but Egypt had been popular with the Europeans since Georgian times. Elizabeth, Darcy and their growing family were well-off and had enough leisure time to make the journey seem plausible and it was the kind of thing wealthy Europeans would do, although it would have been adventurous. However that aspect fit in well with the characters of Elizabeth and Darcy and allowed us to imagine them in a whole new environment, as well as meeting up with some old faces.

Amanda: Yes, we wanted to include some of the minor characters from Pride and Prejudice in Pride and Pyramids, as well as introducing some new ones.  As the book starts in London, then moves to Pemberley, before heading off to Egypt, we get a chance to catch up with Jane and Bingley. Then Lizzy and Darcy find they see rather more of Mrs Bennet than they intended! They have six lively children by this time, as the book is set fifteen years after their marriage. They’re still recognisably the characters from Pride and Prejudice, but we see them in their role of parents as well as in their interludes as a couple. And, of course, there are tombs and pyramids and an eerie little doll, which causes quite a bit of trouble! It was a lot of fun to write and I hope Pride and Pyramids will be just as much fun to read. It’s Elizabeth and Darcy as you’ve never seen them before!

Amanda Grange was born in Yorkshire, England, and spent her teenage years reading Jane Austen and Georgette Heyer whilst also finding time to study music at Nottingham University. She has had over twenty novels published including six Jane Austen retellings, which look at events from the heroes’ points of view. Woman said of Mr Darcy’s Diary: “Lots of fun, this is the tale behind the alpha male,” whilst The Washington Post called Mr Knightley’s Diary “affectionate”. The Historical Novels Review made Captain Wentworth’s Diary an Editors’ Choice, remarking, “Amanda Grange has hit upon a winning formula.” Austenblog declared that Colonel Brandon’s Diary was “the best book yet in her series of heroes’ diaries.”

Jacqueline Webb lives on the Wirral, which is near to Liverpool, England, with her husband, two sons, two cats and one dog. She is a teacher of French and English and she has had two historical romances published by Robert Hale – The Scarlet Queen  and Dragonsheart. She has also just had a paranormal romance e-book published by Lyrical Press Sophronia and the Vampire, under the name Jacqueline Farrell. She has always enjoyed writing but didn’t get really serious about it until she was in her early forties. Her sons were very small and she was working part-time and feeling as though she was just rushing from work to babies without any time doing something she enjoyed. So she joined the Romantic Novelists’ Association and submitted a novel to their New Writers Scheme. Although she didn’t get anywhere with that submission she was given some great advice and wrote another novel which did get published.

Giveaway chance for Pride and Pyramids

Enter a chance to win one of three copies of Pride and Pyramids by asking either author about their research and writing experience, or, which of Jane Austen’s original characters from Pride and Prejudice you would like to fall victim to the mummy’s curse by midnight PT, Wednesday, July 11, 2012. Winners to be announced on Thursday, July 12, 2012. Print edition shipment to US and Canadian addresses only. Ebook edition internationally. Good luck!