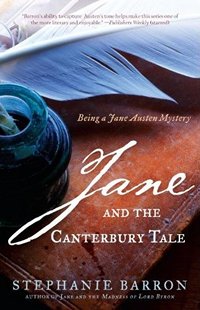 There is a trail that winds through the edge of the grand country estate of Godmersham Park in Kent owned by Edward Austen-Knight, elder brother of the authoress Jane Austen. Pilgrims have traversed this foot-path for centuries on their way to the shrine of the martyr Saint Thomas Becket at Canterbury Cathedral. Chaucer based his famous narrative, The Canterbury Tales, on pilgrims who travel across this path. Author Stephanie Barron places her eleventh novel in the Being a Jane Austen Mystery series in this rich, historical environment and spins a fascinating murder mystery to rival any story offered by the Knight, the Nun, or the Miller in Chaucer’s original.

In the fall of 1813, while visiting her wealthy, widowed brother Edward at his grand estate in Kent, Jane attends a wedding at the neighboring Chilham Castle. Joined that day in connubial bliss are the beautiful young widow, Adelaide Fiske, and the dashing Captain Andrew McCallister. Jane’s young niece Fanny Austen-Knight is also in attendance and being courted by a queue of eager Beaux. While locals John Plumptre, James Wildman, and George Finch-Hatton watch her dance the waltz with visiting dandy Julian Thane, a footman delivers a curious gift to the bride, a silken reticule that she accepts with some trepidation. Inside are dried brown beans. Jane is quick to observe that the bride’s reaction must have some hidden meaning.

The following morning a man is found dead upon the pilgrim’s path on the Godmersham estate near the ancient parish church dedicated to St Lawrence the Martyr.  At first, it is thought that he was felled by a stray hunting shot by one of the young local men out for a morning’s sport of pheasant, but Jane sees the signs of an entirely different transgression. Her brother Edward, First Magistrate for Canterbury, is called to the scene and concurs that this was no hunting accident. The coroner arrives to offer his assessment and soon discovers that the deceased is none other than Curzon Fiske, the thought-to-be-dead first husband of the recently married Adelaide, who after abandoning his wife in a flight from his creditors four years prior, departed for India and died there. Inside the depths of his coat pocket was a stained note with St Lawrence Church written upon it and one dried brown bean – an ominous tamarind seed.

As the mystery swiftly unfolds we are privy to an interesting collection of characters who each have their own tale to tell: a grieving widower, a young girl experiencing romance and heartbreak, an odious clergyman, a Bond Street Beau, a loose maid, a callous and calculating mother, and our adventurous detective Jane Austen, ever observant, always witty, relaying all of their stories in her journal and cleverly solving the crime.

Each chapter is epigraphed by pertinent quotes from Chaucer’s tale and every word of this novel is a treasure. Barron is a Nonpareil in channeling my dear Jane. After eleven novels I never doubt her historical detail or unerring voice. This may be the last in the series, and I am sorely grieved at the loss. Jane and the Canterbury Tale is engaging, rich, and dramatic. The ending is a shock, but not nearly as devastating as the possibility of the demise of this series.

This is my ninth selection in the Being a Jane Austen Mystery Reading Challenge 2011, as we are reading all eleven mysteries in the series this year. Participants, please leave comments and or place links to your reviews on the official reading challenge page by following this link.

Author Stephanie Barron has generously offered a signed paperback copy of Jane and the Canterbury Tale to one lucky winner. Leave a comment stating what intrigues you about Jane Austen as a detective, or if you have read Chaucer’s The Canterbury Tale, which was your favorite character by midnight PT, Wednesday, September 21, 2011. Winner to be announced on Thursday, September 22, 2011. Shipment to US addresses only. Good luck!

27 thoughts on “Jane and the Canterbury Tale: Being a Jane Austen Mystery (Book 11), by Stephanie Barron – A Review”