Jane Austen—that lauded, shrewd observer and chronicler of humanity—was also a skillful sleuth. Or so readers are thoroughly convinced in the fourteenth book of acclaimed historical mystery author Stephanie Barron’s Being a Jane Austen Mystery series, Jane and the Year Without a Summer.

Off to the Less-Celebrated Watering Hole

It is 1816, and Jane Austen is facing ill health of unknown cause. In an attempt to treat her ailments, she travels with her sister Cassandra to drink allegedly restorative mineral waters, attracted to the remedy END_OF_DOCUMENT_TOKEN_TO_BE_REPLACED

I have great news to share today. Bestselling historical mystery author Stephanie Barron has a new “Being a Jane Austen Mystery” in the queue.

Jane and the Year Without a Summer arrives on February 8, 2022, marking the fourteenth novel in the popular series. Set in Regency England, the series is based on actual events and people in Austen’s life and times. Inspired by the author’s life-long admiration of Austen and her writing, Barron’s skill at channeling her voice and the historical detail is nonpareil. Here is a description of the book, the big cover reveal, and an exclusive excerpt from the novel. END_OF_DOCUMENT_TOKEN_TO_BE_REPLACED

As a fan of the Being Jane Austen Mystery series, I have been all anticipation for the latest edition, Jane and the Waterloo Map. Author Stephanie Barron knows her Austen lore, as well as a being a masterful storyteller and researcher; writing in a most Austen-like style. She is also The Incomparable when it comes to Regency mysteries. Given that disclaimer, and holding the series in much esteem, I feel quite at liberty to share my impressions herein.

The novel opens with our dear Miss Austen attending her sick brother Henry at his London residence while editing the proofs of her latest novel, Emma, for her publisher John Murray. Summoned to Carlton END_OF_DOCUMENT_TOKEN_TO_BE_REPLACED

The holidays make me nostalgic for past times I’ve never actually experienced, so I leapt at the chance to spend the Yuletide season with Jane Austen. Jane and the Twelve Days of Christmas is the twelfth installment in a series that features one of my favorite novelists as an amateur sleuth, but so far I hadn’t managed to read one of them. It seemed high time to rectify that lapse, especially since author Stephanie Barron studied European history in college and then worked as a CIA analyst, highly suitable credentials for writing a story of intrigue set in the past.

The book opens on a blizzardy, bitterly cold evening with Jane Austen, her mother, and her sister Cassandra traveling by coach to the home of Jane’s eldest brother James and his family in Hampshire. Unfortunately, when they reach the end of the public line the women find that James has sent an unlighted open horse cart for the last few miles of their journey, even though it’s dark outside and blowing END_OF_DOCUMENT_TOKEN_TO_BE_REPLACED

Here we are at the ninth novel in the Being a Jane Austen Mystery series, Stephanie Barron’s sagacious slant on “our dear Jane” as a sleuth!

The spring of 1811 finds Jane in London staying with her banker-brother Henry Austen and his sophisticated wife Eliza at their residence on Sloane Street preparing her first novel, Sense and Sensibility, for publication. While attending a performance of Macbeth at the Theatre Royal at Covent Garden, it is difficult to determine who is the bigger draw to the audience; the esteemed actress Mrs. Siddons on stage, or the beautiful Russian Princess Evegenia Tscholikova in a box. That very week, her private letters to her married lover Lord Castlereagh had been published in a London paper for all to read. Such a shocking scandal for a Tory Minister is sure to have serious repercussions, but finding the lifeless body of the Princess strewn across the his front steps the next morning with her throat cut should not be one of them. Jane and Eliza are shocked, but certain that it is not the suicide that the paper reports. END_OF_DOCUMENT_TOKEN_TO_BE_REPLACED

Please join us today in welcoming author Stephanie Barron on her book blog tour in celebration of her eleventh novel in the Being a Jane Austen Mysteries series, Jane and the Canterbury Tale to be released tomorrow by Bantam Books.

Walking Godmersham in Search of a Tale

About a dozen years or so ago, when my elder son was still a toddler and my younger not yet born, I left Sam in the care of a nanny and his dad, and wandered around England alone.  I had ten days to myself, and the trip would have been intensely boring to anybody but me—no Tower of London, no Blenheim, no flying trip to Warwick Castle.  The itinerary was entirely dictated by places Jane Austen had lived.  I had written two books about her and intended to write more; but I needed a visual sense of all the places she had known, or could possibly have used herself as settings for her novels.

In some cases, it was easy to find her—in Bath, for example, where a cottage industry in Austen Walking Tours is thriving.  Other places were more challenging.  I was intrigued by the possibility that Jane had actually visited the town of Bakewell in Derbyshire, three miles from the ducal seat of Chatsworth—a town she actually mentions in Pride and Prejudice, although tradition insists she was never there.  She might have gone to Bakewell, possibly, while spending six weeks with her cousin Edmund Cooper in his tiny village of Hamstall-Ridware, Staffordshire.  Having seen the easy places—Portsmouth and Southampton, Chawton and Bath, Hans Crescent in London—I threw myself behind the right-handed wheel of a rented car and took to the carriageways, as highways are called in England.  They terrified me.  I consistently made the mistake of hugging the right lane of multi-lane roads, thinking it would be the “slow” lane—except, of course, in a reverse-world it was the fast lane, and I was the object of frustration and ridicule. END_OF_DOCUMENT_TOKEN_TO_BE_REPLACED

In the winter of 1807, we find Jane Austen in the seaport of Southampton living in hired lodgings while her brother Francis Austen’s new residence is made ready for them at Castle Square. The Austen women (Jane, sister Cassandra, their widowed mother, and a dear family friend Martha Lloyd), will all be residing together under her brother’s kind graces. He is at present a landlocked Royal Navy post-captain anxiously awaiting his next assignment, and his first child.

News has reached Frank of a possible new ship, but the circumstances of its availability are a two-edged sword. Its previous captain is a personal friend, Thomas Seagrave, who has been charged with violating the Articles of War by murdering an unarmed French captain during a siege. The prime witness to the assault is Seagrave’s first lieutenant, Eustace Chessyre, an older officer who has been passed by many times for promotion. The case against END_OF_DOCUMENT_TOKEN_TO_BE_REPLACED 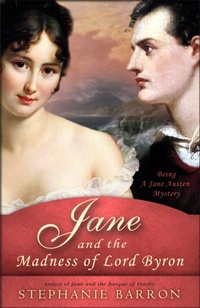 One thinks of Jane Austen as a retiring spinster who writes secretly, prefers her privacy and enjoys quiet walks in the Hampshire countryside. Instead, she has applied her intuitive skills of astute observation and deductive reasoning to solve crime in Stephanie Barron’s Austen inspired mystery series. It is an ingenious paradox that would make even Gilbert and Sullivan green with envy. The perfect pairing of the unlikely with the obvious that happens occasionally in great fiction by authors clever enough to pick up on the connection and run with it.

Jane and the Madness of Lord Byron marks Stephanie Barron’s tenth novel in the best-selling Jane Austen Mystery series. For fourteen years, and to much acclaim, she has channeled our Jane beyond her quiet family circle into sleuthing adventures with lords, ladies and murderers. Cleverly crafted, this historical detective series incorporates actual events from Jane Austen’s life with historical facts from her time all woven together into mysteries that of course, only our brilliant Jane can solve. END_OF_DOCUMENT_TOKEN_TO_BE_REPLACED