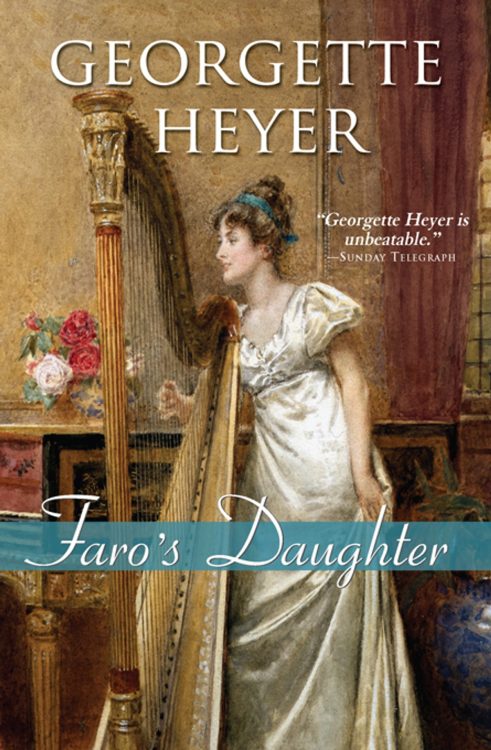 From the desk of Joanna Go:

Published in 1941, Faro’s Daughter was written during a trying time in Georgette Heyer’s life when she was at odds with her agents and publishers, and war was wreaking havoc on the publishing industry.  She was forced to put this work aside in favor of another, but reading the seamless story now belies all that turmoil.  This is a rollicking romp of a romance story that features one of Heyer’s most endearing couple truly well matched in wit, wiles, and words.

‘I may be one of faro’s daughters, but I’ll not entrap any unfortunate young man into marrying me, even if my refusal means a debtors’ prison!’ (Chapter 4)

That is the pickle that Deborah Grantham finds herself in.  Orphaned 10 years prior, Deborah and her younger brother Kit were raised by their kind-hearted, but addle-brained aunt, Lady Bellingham, who was in turn left badly dipped by her husband.  To make ends meet, Lady Bellingham decided to parlay her knack for hosting famous card parties into running a ‘proper’ gambling house in the respectable area of St. James’s Square and Deborah has been presiding over her gaming tables ever since leaving the schoolroom.  Her refreshing beauty, quick wit, and charming ways are an instant hit with the ‘ton’ customers, but her reputation has been continually called into question by working in such a place.  To make matters worse, Lady Bellingham has absolutely no head for business and soon sinks them into debt.  Thus, the clever Deborah is forced to balance the advances of two patrons of consequence to keep themselves afloat.  On one hand is the odious and maquillaged Lord Ormskirk: a widower twice over who’s twice Deborah’s age, he has acquired the debts and mortgage of Lady Bellingham and only has dishonorable designs of making Miss Grantham his mistress.  On the other hand is the handsome and impetuous Lord Adrian Mablethorpe: an heir to a great fortune and title who’s five years Deborah’s junior, he vows to save Miss Grantham from her wretched situation and only has the honorable intention of making her his wife… that is, when he comes of age in two months.  Giving in to Ormskirk is unpalatable while robbing the cradle with Adrian is unconscionable, so what is a girl to do?

Enter Max Ravenscar, the older cousin and trustee of Lord Adrian Mablethorpe.  He has been tasked by his aunt to employ whatever means to save Adrian from a disastrous alliance.  In their first encounter, Ravenscar engages Deborah in an impromptu game of picquet to size her up.  As the stakes get higher and higher, neither one is willing to back down until push comes to shove and one has to bow out gracefully and this cleverly sets the tenor of their relationship.  Miscalculating Deborah as a grasping schemer, Ravenscar offers her an outrageous sum of money to relinquish her hold on his love-struck cousin.  Shocked and angered by such an insult, Deborah throws the bribe back at the insufferable Mr. Ravenscar.  She silently vows to punish him in the most vindictive way and devilishly resolves to live up to his low opinion of her.  From such inauspicious beginnings of wrong impressions and injured pride, the sparks and barbs continue to fly between the two as they race in a game of one-upmanship that involves an outrageous scene at the Vauxhall Gardens, three abductions that all have unexpected results, and a nail-biting curricle race.  With several aces up in each of their sleeves, the ante keeps rising…  The one who blinks first will have to fold… and the one who finally holds all the aces will win in this game of love.

The first thing that struck me was Heyer’s bold choice of a heroine who works out of a gaming house.  How was it that she is not more of a social outcast than she is?  Heyer, in her inimitable style of a throw-away line comparing Lady Bellingham’s establishment to ‘one of the Archer-Buckingham kidney’, hints that the story is set in the 1790’s, alluding to the notorious Ladies Archer and Buckinghamshire who were pilloried in the newspapers for fleecing young men at the game of Faro, and nicknamed ‘Faro’s Daughters.’  But as Jane Aiken Hodge explains in her biography of Heyer, this was pre-Regency period and ‘the social code was much less rigid… the age when the plebian Miss Gunnings could become duchess.’

Heyer truly shines in this one with sparkling dialogue, pitch-perfect chapter construction, and unrelenting dramatic pace.  But what I enjoyed most is its echo of two other favorite literary couples of mine.  With Max Ravenscar’s concession that Deborah is ‘tolerably handsome’ and Miss Grantham’s emphatic ‘Marry you? I would rather die in the worst agony you can conceive!’, one can’t help but draw a parallel to Mr. Darcy and Elizabeth Bennet; while their unending witty war of words throughout the novel is surely a send up to Shakespeare’s Beatrice and Benedict.

So, members of the Austenolatry and Bardolatry clubs, place your bets on this one!

We received a review copy of the book from the publisher in exchange for an honest review. Austenprose is an Amazon affiliate. Cover image courtesy of Sourcebooks Casablanca © 2008; text Joanna Go © 2010, austenprose.com. Updated 19 March 2022.

83 thoughts on “Faro’s Daughter, by Georgette Heyer – A Review”