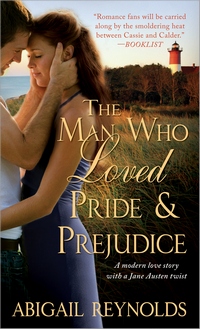 Guest review by Christina B.

I was anxious to read The Man Who Loved Pride & Prejudice: A Modern Love Story with a Jane Austen Twist, by Abigail Reynolds as I have been a fan of her Pemberley Variations series for a few years, own all her other commercially published and self-published books and look forward to anything new offered by this author. But I would be quite remiss if I did not warn you, as a friend, that this is a Sourcebooks re-issue of Reynolds’ contemporary romance Pemberley by the Sea, loosely inspired by Austen’s novel Pride & Prejudice. As a reader of many Jane Austen based prequels, sequels and what-ifs, I would have been miffed had I bought this book only to discover I had previously purchased it in 2008 under its original name or even the self-published book from 2007. It is the humble opinion of this reader that Sourcebooks would have done better had they represented this in small text under the new title, “Previously Pemberley by the Sea.”  That said, if you haven’t read it the mass market compact paperback size (and bargain price of $6.99!!) is an ideal companion for your summer vacation. Apparently an entirely new book by Reynolds entitled Mr. Darcy’s Obsession is due out October 2010. Yes, please! In the spirit of Sourcebooks re-issue, here is my re-issue of my original review of this novel:

The story begins on the summer seaside resort of Woods Hole, a research Mecca for marine biologist Dr. Cassie Boulton. As she overhears a conversation between Calder Stephen Westling, III, a rich Republican politician’s son and his friend Scott, Democratic humble inner-city Chicago Cassie casts Calder as pompous and insulting. Sound familiar? As a relationship grows between Cassie’s friend Erin and Scott (paralleling Jane and Bingley), Calder and Cassie are thrown together on various excursions; and like Darcy, Calder finds himself drawn to Cassie. There is a particularly passionate, albeit spontaneous love scene at the beach, and although Calder believes this is only the beginning to their relationship, Cassie dissembles to concentrate on her research. By summer’s end, Calder leaves under a cloud of misunderstanding and heartache, and Cassie returns to her tenure track at a Philadelphia college. Later, she discovers the true identity of one of her favorite romance novelist Stephen R. West is none other than her very own Calder Westing. Like Darcy’s letter to Elizabeth, Calder’s novel (which he has dedicated to her) confesses through his own Pride and Prejudice adaptation, all he was unable to verbalize.

Reynolds does a great job with her characterizations with the exception of Rob Elliott, who is utterly contrived and unconvincing as Cassie’s previous love interest. He is supposed to lend depth to Cassie’s lack of confidence in men; unfortunately, his character seems almost a thin afterthought. Unlike Darcy and Elizabeth, when Calder and Cassie do finally get together, there is quite a bit of coddling and reassuring for each others insecurities. But given their personal histories, can you really blame them?

I own all of Abigail Reynolds’ published works, and as much as I dearly enjoy all her Regency era Pride & Prejudice “what ifs”, this modern romance is a favorite. The first time I read this romance (when Reynolds had self-published it in 2007) I read it from cover to cover in one night as I simply could not put it down. The 2008 Sourcebooks edition had undergone major professional edits – deleting the entire gang connection – which served to make it stronger and more cohesive. And the re-issued The Man Who Loved Pride & Prejudice remains the type of easy read you will want to keep at the top of your ‘to be re-read’ book stack as there is just enough delicious romantic tension to keep you turning the pages. Is it Austen? Well, most assuredly not. But this modern romance can easily stand on its own. For mature eyes only.

4 thoughts on “The Man Who Loved Pride and Prejudice, by Abigail Reynolds – A Review”