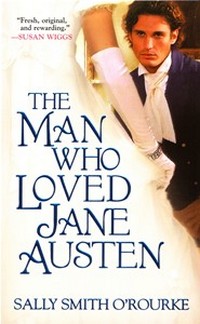 Was fictional hero Fitzwilliam Darcy in Pride and Prejudice based on a real person who author Jane Austen met and fell in love with in 1810? In this reissue of her 2006 novel, author Sally Smith O’Rourke cleverly re-engages our fascination with Austen’s ultimate romantic hero Mr. Darcy and presents readers with a contemporary heroine pursuing the question if Darcy’s character was inspired by Austen’s personal experience?

New York City artist Eliza Knight is a 21st-century Austen fan who discovers two old letters tucked behind the mirror of her new antique vanity table addressed to “Dearest Jane” from F. Darcy, and the second unopened letter to Fitzwilliam Darcy, Chawton Great House. Puzzled, Eliza knows that Mr. Darcy is Jane Austen’s fictional creation and not a real person, or is he? Determined to find out if the letters are real or a crafty hoax, she presents them to an Austen scholar and Head of the Rare Document Department at the New York Public Library who skeptically examines them. When the scientific testing and hand writing analysis prove they are authentic, Eliza is shocked. In addition, she learns that another similar letter has recently surfaced leading her to its owner, a wealthy horse breeder in the Shenandoah Valley of Virginia. Determined to meet him, she travels to his estate Pemberley Farms to learn about his interest in Jane Austen and why he shares Fitzwilliam Darcy’s name. When Eliza reveals to him that she has discovered additional letters similar to his, he is anxious to know at any price the content of the sealed letter and is very keen to purchase them. When she refuses to sell the two hundred year old letters, his intense reaction and admission that the message in the unopened letter was meant for him is unbelievable. Eliza knows that the notion is absurd, until he begins to tell her the entire amazing story.

This is not your typical Jane Austen sequel; in fact, it is not a sequel at all; falling into a uniquely new Austen book category – Austen paranormal mystery romance! To say more would spoil the multi-dimensional plot, but just imagine a blending of a Jane Austen biography, a contemporary romance novel and the movie Somewhere in Time and you might begin to understand my meaning. This is a ‘what if’ story that asks the reader to imagine another possibility of how Jane Austen was inspired to create her most alluring and romantic hero, Mr. Darcy. Austen purist will have to turn a blind eye to the historical and biographical flubs, (and there are more than a few), and disarm the ‘breach of etiquette’ alarm in their heads in order to just let go and enjoy the ride. Romance readers will take pleasure in Ms. O’Rourke’s breezy modern style which at times was dryly witty and at others hampered by contrite clichés. The possibility that Fitzwilliam Darcy was actually a real person is an intriguing notion that many Austen scholars have researched and enthusiasts have speculated upon for years. I commend her creativity in trying to fictionally answer the riddle but felt that the story could have been more convincing if she had taken her audience and herself more seriously. None-the-less, The Man Who Loved Jane Austen is a pure bit of escapist muslin that will in turns miff and amuse you.

2 thoughts on “The Man Who Loved Jane Austen, by Sally Smith O’Rourke – A Review”