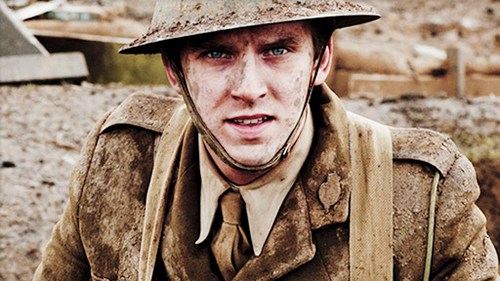 As episode four of season two of Downton Abbey on Masterpiece Classic unfolded last night, the emotions of the household passed into the dark side of the moon. Three members return to Downton, all bringing heartache.

Sacrifices are felt both upstairs and downstairs from the devastating war. While shocking news brings sadness and concern to loved ones at home, those not so loved employ blackmail and deceit to play out their power games and revenge. However, when the going gets tough, who better than to be in your corner than the Dowager Countess Violet? Granny on the warpath, fighting for her family and staff, is an implacable force.

The final scene of this emotional episode will leave a lump in your throat. Even the theme music played over the final credits sounds like a requiem mass. Here is a brief recap of the episode from PBS.

Amiens, 1918: Devastating news from the front rocks the very foundations of Downton Abbey, and it is up to the Dowager Countess to buck bureaucratic protocol and bring Downton’s men home. In an unwelcome return, Vera Bates threatens to make public the scandalous story of Lady Mary’s ill-fated indiscretion. Desperate to contain the story, Mary appeals to the savvy opportunist Sir Richard Carlisle.

Mary is not the only woman to consider hard sacrifice. Some will make it against their will, some will be denied a chance, and some will refuse. Daisy may buckle from its pressure, while Lavinia desperately wishes for such a burden. Sybil must push back. And Cora, preoccupied with the running of the home, cannot see that a sacrifice may already have been made.

“They’re going to chuck everything they’ve got at us.” Matthew Crawley

Matthew. When this episode opened at the front with a scene of rats the size of small dogs, I knew we were in for some startling visuals. Being the cynic that I am, I can usually find humor in just about anything, but I have to confess upfront that there is nothing to laugh about men living in deplorable conditions and dying in the trenches in France. When you and William prepare for battle I felt an overwhelming sense of doom. With my lace hanky at the ready, I bravely continued. My instincts were right. Not good.

“I say. Is this an instrument of communication or torture?” Dowager Countess Violet

Dowager Countess of Grantham. Thanks for the one true laugh of the entire episode. You vs. technology. Anyone who has ever tried to learn a new computer program, cell phone or any other electronic device today was laughing out loud with you. But, the burning question of the night? Who the heck is your niece Shrimpy who you were conversing with on the telephone? What kind of name is that? One is reminded of fictional characters named Bunny, Slugo and Turnip, but Shrimpy seems so funny coming from the lips of the esteemed Dowager Countess. (Will we meet Shrimpy next season?)

Matthew. Your return after being injured on the front is a shocker to all of your family and the downstairs staff. You do not take the news of your probable life-long limitations very well, and we can’t blame you. Your reaction to push away all who love you is pretty typical. This turn of events would bring many a man to his knees. We commend you for your dignity, but please don’t make anymore rash decisions.

“Who would of thought it? The cold and careful Lady Mary Crawley. Well, we know better now.” Sir Richard Carlisle

Lady Mary. You have told us that your fiancé is from a tough world. Well, he just pulled you into it. Do you really want to marry that  Rupert Murdock wannabe from hell? Whatever the outcome of the scandal from your night of sin might bring, it would only last a few years. Ditch the jerk. Go to America and find a randy Yank and be happy, please. Last season was all about you being tormented by the entail. This season it is the fallout from being pamuked. (addition of verb to the Downton lexicon courtesy of @OBriensBangs)

To engage in sexual intercourse with a Turkish diplomat.

“Good God almighty. The engagement is announced between Lady Mary Josephine Crawley, eldest daughter of the Earl and Countess of Grantham and Sir Richard Carlisle, son of Mr. and the late Mrs. Mark Carlisle of Morningside, Edinburgh.” Lord Grantham

Edith! I loved your reaction during the surprising news of the announcement in the London newspaper of Mary engagement in this scene. Your expressions are priceless. I wanted to know what your were thinking. Are you happy because Mary is finally going to be married and move out of Downton? Or, are you inwardly beaming because Mary looks like a fool in front of your parents for not having any control over her fiancé? Or, are you thinking now your parents are so distracted by Mary’s problems that you might get a chance to drive that tractor again?

I think we are at the point in the narrative where things look very grim for many before the story arch. Not to worry. Screenwriter Julian Fellowes has taken us to the dark side for a reason. He knows what he is about.

Even though this episode was filled with sadness and loss, the plot is moving in an interesting direction. There are so many open ends to tie up. What is Vera Bates going to do next to ruin her husband’s happy life with Anna? Will Mary really marry that heartless Rupert Murdock wannabe who holds her secrets over her like blackmail? Can Lavinia say no to her inner child and find the strength to return to Matthew? What will Matthew’s new different life be like in a wheelchair? And poor Edith and Sybil. Is romance even possible for them now with so many good men dead in the war, and the one that wants one of them a socialist? Stay tuned.