It’s time to brush up on your etiquette period drama fans. The Gilded Age premiers on Monday January 24th on HBO. We shall soon be immersed in the 1880s New York social whirl of Mrs. Astor’s elite, “Four Hundred,” along with some of those social climbing upstarts, the nouveau riche. Gasp!

Period drama fans have been on high alert since the announcement of The Gilded Age in 2018. It started out in production at NBC and then moved to HBO. It’s been a long wait with many starts and stops. The new lavishly produced nine-part historical drama is the creation of Julian Fellowes of Downton Abbey fame. With a pedigree like that, even Emily Post will approve.

The actors attached to this production are quite impressive, notably Christine Baranski as Agnes van Rhijn, a socialite entrenched in old values and social order, Cynthia Nixon as Ada Brook, her younger sister who is dependent on her charity, and Louisa Jacobson as Marian Brook, their young penniless cousin sent to live with her estranged aunts. 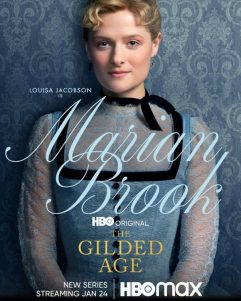 Other interesting casting includes Blake Ritson (Mansfield Park, 2007) as Oscar van Rhijn, Agnes’s son, and way down the roister of dozens of actors in a recurring role is Nathan Lane as Ward McAllister, the ultimate arbiter of social rules and style in old New York. That fact brought a smile. Lane will definitely bring some levity to the series.

The production stills released so far are dazzling, and the trailer is a big tease alluding to future drama and romance. For all of us who adored Downton Abbey, this new series is like catnip. We will be glued to our television sets while sipping wine and eating oysters on the half-shell a la Rockefeller. Well, yes on the wine, maybe NO on the oysters!

There is an official HBO website for The Gilded Age that lists the huge cast, extensive production team, a brief history of the era, and links to the podcast.

Now on to the meat of it – the story!

The American Gilded Age was a period of immense economic change, of great conflict between the old ways and brand-new systems, and of huge fortunes made and lost. Against the backdrop of this transformation, HBO’s The Gilded Age begins in 1882 with young Marian Brook (Louisa Jacobson) moving from rural Pennsylvania to New York City after the death of her father to live with her thoroughly old money aunts Agnes van Rhijn (Christine Baranski) and Ada Brook (Cynthia Nixon).

Accompanied by Peggy Scott (Denée Benton), an aspiring writer seeking a fresh start, Marian inadvertently becomes enmeshed in a social war between one of her aunts, a scion of the old money set, and her stupendously rich neighbors, a ruthless railroad tycoon and his ambitious wife, George (Morgan Spector) and Bertha Russell (Carrie Coon). Exposed to a world on the brink of the modern age, will Marian follow the established rules of society, or forge her own path?

“Another fantastic confection from Downton Abbey’s Julian Fellowes – but distinctly American. Also, much more history is included. Coon, Spector & Benton are the stand-outs.”— Grace Randolph, Beyond the Trailer

“If you’re normally enamored with period dramas, Masterpiece on PBS, or well-orchestrated ensemble pieces, The Gilded Age should provide plenty of entertainment in the weeks to come.”— Ben Travers, IndieWire

“The journey across the Atlantic seems to have invigorated [writer-producer Julian Fellowes’] imagination — The Gilded Age is comfortably shaping up to be his most ambitious, if not his best series since Downton.”— Katie Rosseinsky, London Evening Standard

“Fellowes remains an absolute master at juggling a dizzying number of subplots as well as finding intriguing wrinkles in characters with relatively small roles, such as Blake Ritson as Agnes’s scheming son. There’s a particular embarrassment of riches on the actress side, with Audra McDonald, Jeanne Tripplehorn and Donna Murphy to help class up the already-classy joint.”— Brian Lowry, CNN.com 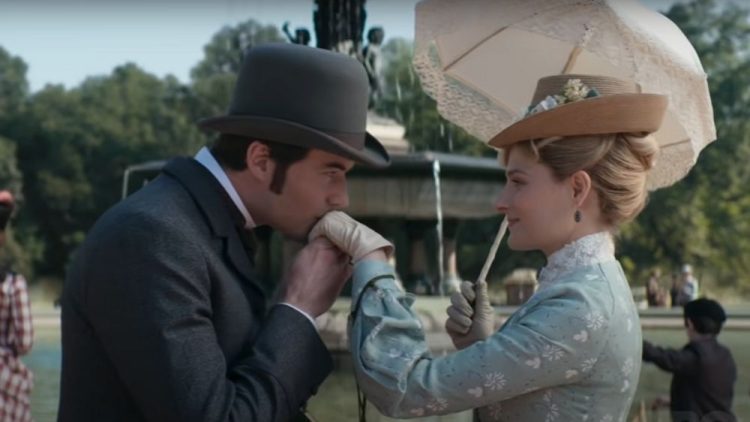 A Bit of Gossip

Here’s an interesting fact. Louisa Jacobson who plays Marian Brook, the young penniless cousin of the van Rhijn sisters, is Meryl Streep’s daughter. I wonder if she can entice her mom into a guest role.

Are you as excited as I am about a new series from Julian Fellowes?

What do you think of the casting? The plot? The costumes?

Drop us a line below and share your thoughts on this preview and what you are currently watching! We would love to hear from you!

7 thoughts on “A Preview of Julian Fellowes’ new Period Drama, The Gilded Age on HBO”