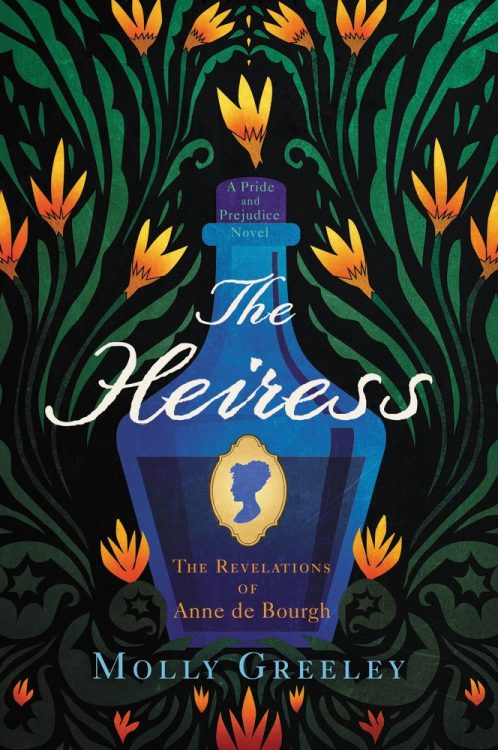 In Jane Austen’s Pride and Prejudice, Miss Anne de Bourgh is known only as the sedate and sickly shadow of her mother, Lady Catherine’s, condescending and loudly opinionated character. The heiress of Rosings Park in Kent, Miss de Bourgh was intended from infancy—as a favorite wish of both her mother and her aunt—to marry her first cousin, Mr. Fitzwilliam Darcy of Pemberley in Derbyshire, thereby uniting two grand fortunes and estates. But when Mr. Darcy ultimately marries that obstinate, headstrong Miss Elizabeth Bennet instead, what is to become of Miss de Bourgh? This is one of many questions explored in Molly Greeley’s fascinating second Pride and Prejudice variation, The Heiress: The Revelations of Anne de Bourgh.

Anne de Bourgh was a wretchedly inconsolable infant. Her parents and nurse were therefore quite thankful for the medical intervention when the local doctor prescribed a dose of sleep-inducing laudanum and declared that she would always possess a delicate constitution. Consequently, Anne spends her formative years receiving twice-daily doses of her magic drops that keep her in a permanent state of lethargy. “My medicine turned me stone-heavy, a breathing statue, eyelids drawing down despite all my best efforts and thoughts drifting like milkweed fluff.” (118)

Under her mother’s formidable thumb, Anne drifts through her days in a stupor, confined to the house and gardens, wearing only what her mother selects, eating little but what her mother approves and her weak appetite allows, not permitted to dance or sing or play an instrument, and restricted from learning or reading too much. All are convinced that she is far too frail to do much of anything at all but simply exist. “If I had a shell like the snail, I thought, I would tuck myself back inside of it, away from their branding pity. I felt at once all-too-visible in my fine gowns and gaudy bonnets, and ill-defined as the edges of a ghost.” (316)

Anne is merely a detached observer of her own life, her languorous health slowly turning to vivid hallucinations. Despite her governess’s insistence that she could aspire to be so much more than what she has settled for, “if you did not stun yourself so thoroughly with your medicine” (1171), Anne continues to see herself as she has long been trained to. “Useless, I whispered inside my head, little mortified arrows that pierced my softest inner places. Useless, stupid, useless.” (1188)

Years pass by with nothing much to distinguish them from each other, until eventually the only certainties she had—her father running their estate, her expected betrothal to her cousin, and the steady support of her governess—begin to leave her, one by one. “My drops were such solace then, letting me float until at last the passage of time dampened my mother’s disappointment. I awakened to find everything exactly as it had been before, except for the tattered and singed remains of my own future.” (1286) When Anne discovers a long-overlooked letter from her former governess, will she finally have the strength to do what she must to overcome the invisible chains that bind her?

Even as a devoted fan of all things Austenesque, I have never actually read a Pride and Prejudice variation with Anne de Bourgh as the protagonist. It was refreshing to view that world from the perspective of a largely unknown secondary character. I am rarely appreciative of first-person narration, but it proved to be necessary for Anne’s story to come alive. We know the background and characters surrounding her well enough; this was Anne’s chance, as a girl imprisoned for decades in her own body, to finally tell her tale in her own words. Although I certainly pitied Anne for all that she endured, I still felt a bit like a detached observer myself, never quite developing an emotional attachment to her.

This story is told with beautifully descriptive prose that has an almost lyrical flavor at times. As Anne weaves in and out of her drug-induced awareness, the reader floats into the atmospheric depths along with her and witnesses her intense torture when she suffers from her opiate-addicted withdrawals. There were some surprisingly intimate moments that I would grant four out of five tea kettles for steam level, but they were tastefully depicted. The story’s conclusion deserves a special mention for the truly lovely and comforting picture it paints, and I also admire the colorful cover design.

The Heiress: The Revelations of Anne de Bourgh shines a beam of hazy sunlight into the dark shadows where a sheltered, unloved creature has been hiding in oppressive, cold stillness, waiting to be awakened with warmth.

We received a review copy of the book from the publisher in exchange for an honest review. Austenprose is an Amazon affiliate. Cover image courtesy of William Morrow © 2021; text Katie Jackson © 2021, austenprose.com.

9 thoughts on “The Heiress: The Revelations of Anne de Bourgh (A Pride and Prejudice Novel), by Molly Greeley — A Review”