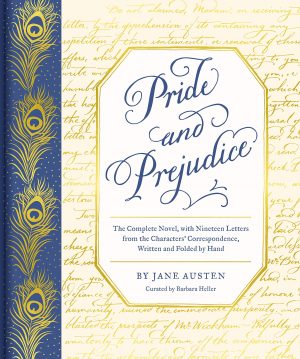 Let me ask you a serious question, Janeites. How many copies of Pride and Prejudice do you own? Fess up. Five, ten, twenty—or more than you will publicly admit to?

I fear that I fall into the latter category, having collected new and vintage copies of the classic novel since my teens when my mom gave me my first copy from her library. Since then it has been an uphill battle against my willpower. When a new shiny P&P hits the market, it’s mine.

Imagine my delight then when I spied a new P&P that included nineteen handwritten letters tipped in. WHOA! Pride and Prejudice: The Complete Novel, with Nineteen Letters from the Characters’ Correspondence, by Jane Austen & Barbara Heller contains the full unabridged text and recreated letters that Jane Austen’s characters wrote to each other during the course of the novel designed to look like they just arrived by post in 1813! I kid you not. Physical letters to hold in my hot little hands.

I did not think it was possible to heighten this Janeites’ P&P experience, however, this new edition blew my bonnet off. I want to frame the “Be not alarmed, Madame,” letter from Mr. Darcy and prominently display it in my home. To see his handwriting and signature. SWOON! Thank you very much, Austen Gods.

Here is a preview of this enchanting new edition to further pique your interest. If you are as much of a Pride and Prejudice geek as I am, it will only take about five seconds for you to realize that this book is a brilliant, eye-popping expansion of the beloved classic that makes you feel one step closer to the characters. It was a total thrill for me. Enjoy!

This deluxe edition brings to life the letters exchanged among Jane Austen’s characters in Pride and Prejudice.

Glassine pockets placed throughout the book contain removable replicas of 19 letters from the story.

These powerful epistles include Lydia’s announcement of her elopement, Mr. Collins’s obsequious missives, and of course Darcy’s painfully honest letter to Elizabeth.

Perusing the letters will transport readers straight to the drawing-room at Netherfield or the breakfast table at Longbourn.

For anyone who loves Austen, and for anyone who still cherishes the joy of letter writing, this book illuminates a favorite story in a whole new way.

Barbara Heller’s career in film and television encompasses finding furnishings and props for many shows including The Americans and When They See Us; location managing films for Francis Coppola, Nancy Meyers, and Barbet Schroeder; and directing award-winning short films that have played at festivals around the world (Cannes, Berlin, Sundance). To satisfy her curiosity, she reported on why hotels fold the end of the toilet paper into a point for NPR. She graduated from Brown University with a degree in English Literature and lives with her son in New York City.

18 thoughts on “A Preview of Pride and Prejudice: The Complete Novel, with Nineteen Letters from the Characters’ Correspondence, by Jane Austen & Barbara Heller”