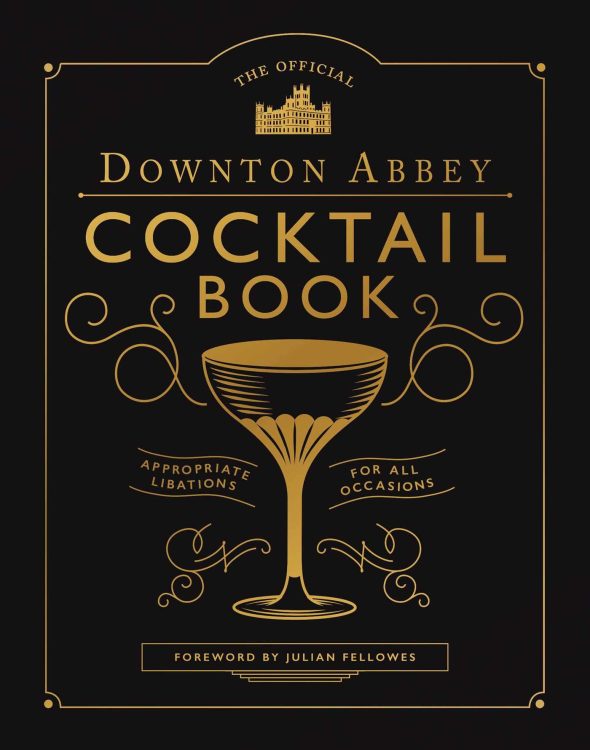 “Drinking is very important at Downton Abbey. At least three types of wine are served at every upstairs dinner, plus port for the gentlemen after it. There’s alcoholic punch at parties, plenty of Champagne, and, as the years go by, the gradual adoption of the cocktail.”

And so, begins the introduction to The Official Downton Abbey Cocktail Book by food historian Annie Gray. Continuing, she goes on to describe the mention of American-style cocktails in season two, which takes four more seasons before we see the very proper British butler Mr. Carson reluctantly serving them to the Crawley family and their guests at a pre-dinner gathering. A cocktail party? Are the shades of Downton to be thus polluted? The Dowager Countess of Grantham is shocked. We are amused.

It is her granddaughter Lady Edith who embraces the consumption of alcohol in the series. Living a modern life after being jilted at the altar by Sir Anthony Strallan, and then alone after her lover Michael Gregson moved to Germany in order to renounce his British citizenship so he could divorce his mentally ill wife and marry her. That was the plan until he was murdered. Out of all the main characters in the series, Edith deserved a drink.

There is so much emotional tension swirling in Downton that the audience has needed this cocktail book since the series opener in 2010. Here are more details about the book including a description from the publisher and a slide show of several of the beautifully designed pages.

Timed to coincide with the much-anticipated Downton Abbey movie, this enticing collection of cocktails celebrates the characters, customs, and drinking way of life at Downton Abbey.

Cocktails were introduced in the drawing rooms of Downton Abbey in the 1920s when US prohibition inspired the insurgence and popularity of American-style bars and bartenders in Britain. This well-curated selection of recipes is organized by the rooms in the Abbey in which the drinks were served and spans everyday sips to party drinks plus hangover helpers and more. In addition to classic concoctions like a Mint Julep, Prince of Wales Punch, and Ginger Beer, this collection features character-specific variations such as Downton Heir, Turkish Attaché, The Valet, and The Chauffeur. The recipes reflect drinks concocted and served upstairs and down, as well as libations from village fairs, cocktail parties, and restaurant menus typical of the time. Features 40+ color photographs, including drink images photographed on the set of Downton Abbey.

Annie Gray is an historian, cook, writer, and broadcaster specializing in the history of food and dining. Annie frequently appears on television and radio, including The Great British Bake Off, Heston’s Great British Food and BBC Radio 4’s Kitchen Cabinet. In 2017 Annie published her first book, The Greedy Queen: Eating with Victoria.

Foreword by Julian Fellowes, the writer and creator of the Emmy and Golden Globe Award-winning TV series Downton Abbey. He is also the Academy Award-winning screenwriter of Gosford Park and the author of the bestselling novels Past Imperfect, Snobs, and Belgravia.

This beautifully designed book contains dozens of full-color images from the pre-movie, six-season TV series, showcasing the upstairs and downstairs characters enjoying libations. You will find recipes for classic cocktails like the Mint Julep and Planter’s Punch, along with beverages that have been inspired by the characters themselves, cleverly reflecting their personality quirks. The Final Say, evokes a strong opinionated character. Can you guess who this is named after? I will give you a hint. The recipe includes crème de violet! Give up? “Don’t be defeatest, dear. It’s very middle class.” I am anxious to try the Turkish Attaché, but who wouldn’t?

3 thoughts on “A Preview of The Official Downton Abbey Cocktail Book: Appropriate Libations for All Occasions, by Annie Gray, and Foreword by Julian Fellowes”